I decided on my titles for writing about The Villain on day one. For this one, I was going to, with tongue somewhat in cheek, talk about how this film portrays women, or woman. No, women. There is, beside Charming, also the old woman that Handsome helps across the street. And, while Charming is rather idiotic in choosing to help her (with a bit of force) across the street simply because she's standing nearby, she is presented as a bit shrill. Handsome deserves her ire, but I can't help but point out that her ire is still presented as an overreaction. And, Charming--both oversexualized and cartoonishly demure.

(It occurred to me last night, by the way, that when Cactus Jack asks Nervous Elk what he does with the white women after he captures them, it feels a little like maybe Cactus Jack doesn't know what men do with women any more than Handsome does.

And, I'll return to that conversation later.)

The film sends up the usual and has Charming be the one who wants to have sex with Handsome, and he's the virginal one who is oblivious to her feminine wiles. But then Cactus Jack, with his explicit intent--he tells Whiskey all about early in the film, and then he repeats it to Charming at the end of the film--of ravishing her is something more of the usual male predator. Only inept. 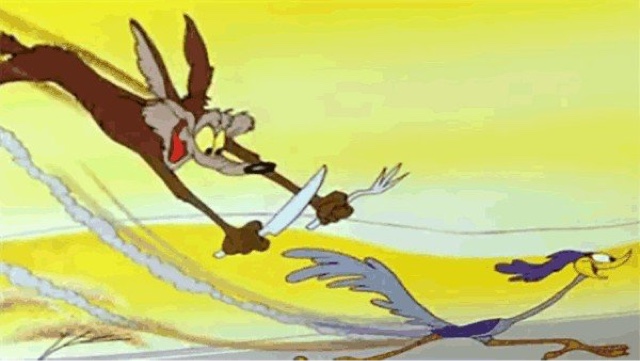 The cartoonishness is like an excuse to be particularly awful. But then, it works as inherent justification as well, because what's so bad about a nice old cartoon? It's just a live-action version of Wile E. Coyote and the Road Runner, if Wile E. Coyote were a bank robber, a thief, and a rapist who got his ideas from a Badmen of the West dime novel instead of an Acme Catalog. And, he's got a horse. And, if the Road Runner were an overtly sexualized woman stuck traveling with the most celibate of white-hat cowboys. And, you know, if Wile E. wanted to rape the Road Runner rather than just eat her...

Which maybe those cartoons were inherently sexual, too. Wile E. was a predatory male, the Road Runner was a playing-hard-to-get... male. (Rather progressive, actually, with the implicit homosexuality.) He shoots him down time and time again, but he keeps pursuing because the natural order of things says he is supposed to be the powerful one.

(Oh, I forgot about the prostitute that tells Handsome off for the cathouse burning because he was too stupid to recognize the fire department wagon. Again, his stupid move. But, still, it feels like this woman is in the wrong. Or maybe I'm just reading into it something that isn't there, not that I would ever admit such a thing.)

Did Wile E. Coyote want to have sex with the Road Runner? Discuss among yourselves.

I want to get back to Charming. Or rather the film's presentation of her. Like this shot, for instance: 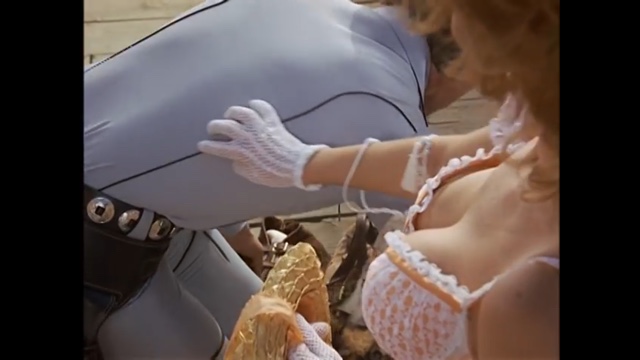 She is inappropriately touching Handsome as he picks up her bags, but the shot has to show off her breasts just as much (if not more so, because less cloth) as it shows Handsome in his tight shirt. Later, she takes off a layer of clothing (though it's Hollywood 1800s so the layers are not that different) before getting under a blanket, a clear invitation for Handsome to get in there with her, but he's too good, or too stupid. The rest of the film suggests the latter far more than the former. She is on display for all the men and she cozies up to them on the train, cozies up to Handsome in the wagon, and ultimately she chooses Cactus Jack because he wants to ravish her.

And I gotta look at that word because technically, it just means to take by violence, or even to fill someone with intense emotion. But, I hear it and I'm thinking (and the film does nothing to detract from this connotation) Cactus Jack wants to rape Charming. I mean, sure, if she was willing, he'd go for that, too. But, he doesn't seem like a guy who needs permission, as it were. He takes what he wants. Or at least he tries to. Like Wile E., Cactus Jack fails almost every time to get what he wants.

Then, there's this exchange between Cactus Jack and Nervous Elk (after Cactus Jack has offered him scalps in exchange for helping):

This after Cactus Jack has said he lost his heart to her, suggesting love, not lust.

Nervous Elk: White woman crazy. They all keep one bullet in gun.

Cactus Jack: Yeah, I heard that. By the way, I've been meaning to ask you, what do you Indians do when you capture a white woman?

Nervous Elk: Nervous Elk not know. Crazy white woman always shoots self before he have chance to find out. All except one who by mistake shoot Nervous Elk in the jewels.

Keep in mind, this is a film for children (and nostalgic adults who grew up on Wile E. Coyote). They're talking about abducting women, and killing their men, and what they would do after. And not only has Nervous Elk never gotten to rape of his captured women, one managed to hurt his manhood more directly. This is the lament befitting meninists and misogynists. Hollywood producers and American presidents.

The Villain is a film for children about a murderous thief intent on committing rape. It operates around sexist ideology (and racist ideology with the natives), but because it is a live-action cartoon, I guess we should forgive it.

Or forget it. It didn't do well at the box office. It's not on Netflix. I own it on DVD now, but I don't figure I will ever have reason to watch it again.

And, maybe no one should.

Ideas that don't work. Ideas that have been outgrown. Such things are worth studying, sure. But, otherwise--aside from some academic approach--they should be left behind. Misogyny. Bigotry. And bad movies. Fuck 'em.