Han Solo likes it when Leia calls him a scoundrel. He gets involved with the rebellion only because he's out for cash. And, decades later (presumably after some brief attempt at settling down and starting a family with Leia) he's a smuggler all over again. And then he dies.

Delve into the Expanded Universe--most of which is no longer canon--and he used to be an Imperial soldier. He defected when he saved Chewbacca from being enslaved by the Empire. That's why Chewbacca owes him a "life debt". One bright light of action in an otherwise scoundrelous (c) existence--

(Which brings to mind an interesting sidenote: How did I know about that life debt as a kid? Was that something they put on the description text of the Chewbacca action figure? Like everybody knows those smaller furry forest folk in Return of the Jedi are Ewoks, but no one ever calls them that. We know it because of licensed products, action figures, books, promotional materials. (Similarly, I wonder if, in The Last Jedi they will actually name the Porgs, or will we all know what they are because of interviews and press releases?) Same for the Wampa that attacks Luke. I know what that thing is called because I had the toy. I didn't have a Dewback toy, but I know what those are called because the toy existed. They do actually namecheck the Tauntaun and the Rancor (both of which I had). 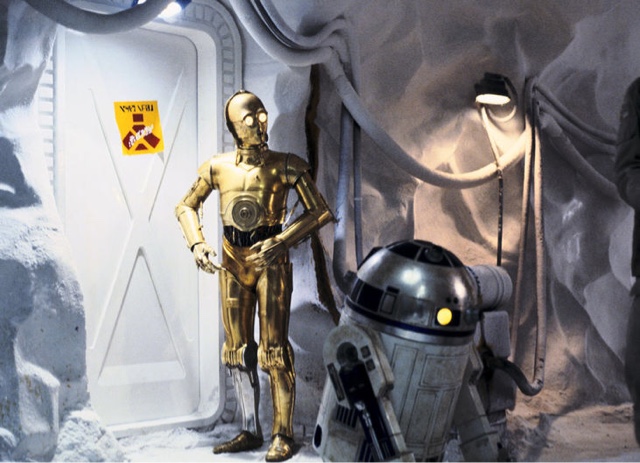 Sidenote part two: Having never actually read Brian Daly's Han Solo novels (which is where I guess that story of Han saving Chewbacca was mentioned), why do I know about Han being a soldier? The blood stripe on his pants I know because of a book about costumes or more general designs for the films; the blood stripes came from his time in the Corellian military. I have no idea why I know this.

Sidenote part three: And where was it mentioned that Obi-Wan and Anakin fought a lightsaber duel near lava so many years before that event was finally visualized (quite outrageously) in Revenge of the Sith? I knew about it back when I was reading Star Wars novels and comic books regularly, but it wasn't in any of the ones I read, I don't think. And this was before the Internet, before fans would share stuff like that for those who hadn't kept up with every story.)

--and that existence is even worse in the Expanded Universe (and also better, since he doesn't return to smuggling years later). In The Courtship of Princess Leia, Han gets jealous when Leia might enter an arranged marriage for political convenience so he kidnaps her and takes her to the planet he just won in a game of Sabacc. And hilarity ensues... Well, if rancors and weird snakes and force-wielding witches is hilarious.

My point is: Han Solo is not a nice guy, not a good guy. Still--and I might comment on this again when I get to Return of the Jedi--he is pretty forgiving, at least when it comes to Lando; Han has been hibernating for months, knowing that Lando betrayed him to the Empire, and yeah, Chewbacca probably caught him up on all the details, but a real scoundrel, dangling off that Sciff, might've actively tried to shoot Lando and called it an accident, rather than blindly hoping to shoot a Sarlacc tentacle. Or maybe, since we don't know exactly how much Chewie told him--because we don't speak Wookie and the movie doesn't linger for everything Chewie's got to say--that Han is not angry at Lando says something positive about Han for a change. I mean, sure Han comes in at the last minute in the Battle of Yavin, saves Luke's life really, but one could argue he was still looking out for his own interests. He had his reward money but could also use a bit more instability in the Imperial government, or the collapse of the Empire itself. Han is not really involved in the Battle of Hoth, and he doesn't rescue everyone who is left who might need rescuing; he rescues Leia (and Threepio tags along). And he spends the next... month?

(The film plays with time here, because the tedious slog from Hoth to Bespin without the hyperdrive would have made for a very boring--or brilliantly observational-of-the-human-condition but far from action-packed--film. And, since space is dark, and Han rarely changes his outfit and Leia probably didn't have a bunch of extra clothes stored on the Falcon, we can't even get a good montage to show them trying to repair different parts of the hyperdrive on a lot of different days, maybe drinking and playing Sabacc or Dejarik, having a good time, Han and Leia really getting to know and like another, lots of shots of Chewie growling and Threepio looking confused. Then, the romance would feel more real, but maybe play a little too generic Hollywood.)

Repairing the Falcon (or failing to) and hitting on Leia. Who is stuck there with him.

(Stray observation: Why does the Exogorth poke its head out of its cave to try to grab the Falcon? For that matter, how does it know to close its mouth at all as the Falcon leaves? The Falcon is flying. If the tiny spaceship were flying through my throat and out of my mouth, I don't think I'd feel it unless it crashed into the walls... Unless the Exogorth has eyes inside its throat. Which would be awesome... And logically more canonical than Exogorth anatomy drawings online...

And then I learned even more about Exogorths because I bothered to check. While the Exogorth has little eyestalk-looking things on the side of its head, apparently, a Wildlife book established that they have a "highly evolved sense of spatial awareness [and] they were capable of calculating the speed, trajectory, and distance of perilous moving bodies around them." This means it didn't need to see the Falcon trying to escape. It had some entirely different sensory organs for that.)

So, I gotta wonder... Or maybe I don't given men's movements and toxic masculinity in our society today. I was going to wonder how more men who grew up on Star Wars didn't turn out to be rebels and/or assholes. I mean, the heroes are a guy who can't complete his training (and gets credited in the opening crawl as a leader of the rebellion even though his leadership is never really demonstrated) and rebels against the only form of government he's ever known, and a guy who looks out for himself over everyone else and takes advantage of being trapped on a spaceship with a girl to, at any opportunity, come on to her and harass her...

I guess I don't have to wonder. These were '70s heroes. Womanizers and rebels.

And, it's no wonder that in recent years, some conservatives have framed Luke as a radicalized jihadi, Palpatine as a benevolent dictator, and even justify destroying Alderaan. The politics of Star Wars are skewed toward rebellion. Some, growing up with these movies, might embrace such politics. Some might reject them and stand opposed. Good and Evil will do that to people.