nobody means what they say on thanksgiving

I like the implication that Claudia (Holly Hunter) is lost in the painting she's restoring, so much so that she isn't sure where to walk after.

(I've written about Home for the Holidays before--

I just wanted an old standby tonight. Long day of cooking and then eating, and there might be shopping later.

And, there's Angela Paton (Mrs. Lancaster in Groundhog Day) as the mildly annoying old lady next to Claudia on the plane. Like Thanksgiving can be, it's like a reunion.

I like how Henry (Charles Durning) sneaks some pumpkins pie the night before Thanksgiving, slips into bed and immediately admits to it without any prompt or accusation. 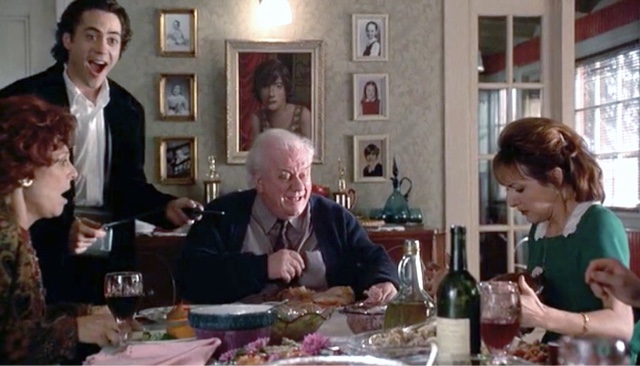 Home for the Holidays "captures something ineffable about how going back home to squabble with relatives and eat lots of food can add a nostalgic glow to the child of late November," writes Todd VanDerWerff at Vox.

Aunt Glady's (Geraldine Chaplin) reminiscence about meeting her sister's husband for the first time is an amazing bit of cinema--great performance, great reactions, and when she turns to the kids, it's both horribly ridiculous and wonderfully meaningful at the same time.

The movie "knows these characters will do this again, and again, and again, even if we don't get to drop in on their future family gatherings," VanDerWerff says. "Like a family photo, the movies is a snapshot of a time and a place, one that leaves us to extrapolate everything that happens after the photo is taken, wishing only good things for its subjects."

Like real family. However insane, however bitter and angry, however nice, however much you hate them or love them, you do wish them well when they're gone.

Did I make that connection before--the fish? Claudia's thing with her daughter (Claire Danes) is to think of an angelfish they saw when they were snorkeling once. When life s too hard, just think of the fish and just float. Leo's (Dylan McDermott) last name is Fish. He's the guy introduced to Claudia's life in such a way that in a different movie it might've just been a romantic comedy about them. The meet-cute is that she thought he was her gay brother's (Robert Downey, Jr) new boyfriend (and he heard her distraught voicemail she left her brother), but Leo is available. She and Leo interact nicely. He's a calm in her family storm. He's the fish she forgets to remember.