The set for Sweethaven in Robert Altman's Popeye took more than half a year to build. Because of this, and because of Altman's attention to detail, there is a wonderful lived-in feel to the setting immediately. Unlike, say, Hobbiton in the Lord of the Rings films, this film takes place, ostensibly, in the real world, but the setting of Sweet Haven, and all of its strange and unique folk give it a storybook feel. 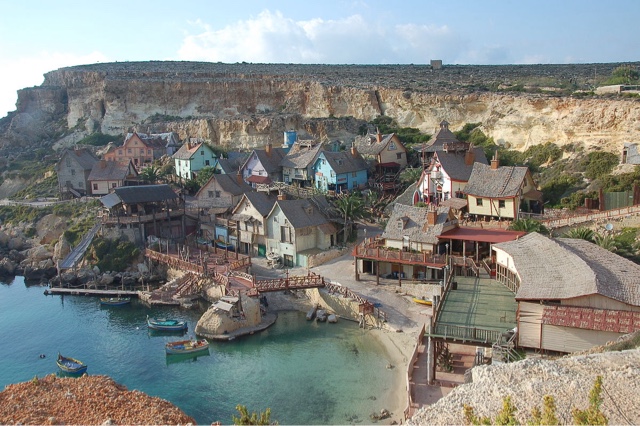 Then, I'm sitting here thinking of grabbing my copy of Wright's Sixguns and Society to write about this movie and it's structure being that of a western, and instead of grabbing that book, I'm just watching and enjoying the film. It's been a long while, I think, since I last watched it. Popeye's malapropisms, especially, are quite amusing. And, there are some great lines in this thing that I'd forgotten...

"I'm a very tolerant man, except when it comes to holding a grudge" may be one of the greatest lines in the history of cinema.

Popeye is not a great movie, it's not much of a musical, but it embraces its own strangeness from the get go and runs with it so fervently that it can't help but be fun.

And, "the good always wins over the bad" is a nice echo of what so many other films were telling me as a kid. Plus, you could have bulging forearms, a squinky eye, and smoke (except I'm not sure he ever actually smokes it) a pipe and a girl might still like you over the brute next door. Not always accurate to the real world, of course, but these are common lessons from Hollywood.