however dark the night

Perhaps the lesson of The Idolmaker is that whether you're the one being used or the one doing the using, there's hope for you in the end.

But, with new accusations of sexual harassment and abuse from men in power virtually every day lately, I figure those men get to the back of the line when it comes to hope.

Seriously, the scene with Tommy Dee and the 14-year-old girl in the car is on and I see on my phone that Twitter is blowing up with comments about Trump supporting Roy Moore, implying that all of Moore's accusers are liars. It's like some sick sort of poetry.

This is a movie in which the protagonist, the hero of the story, blames a young girl for being alone with his artist (though, he yells at Tommy Dee afterward, he then offers to hook him up when he wants a woman, so there's that), bribes DJs and (sort of) magazine editors for airplay and good press, yells at the woman he's with (and has already come on to), calls women "god damn broads", and then kisses that woman forcefully, and she goes to bed with him and sticks with him after. This hero recruits one singer then neglects him for another (who he meets while berating him over spilling dishes while waiting on his table), forces the second into hiding, and when that singer rebels, holds legal guardianship over him and threatens to send him home to his grandma, which would mean the end of his career. But, when Caesare finally does turn against Vincent, after Tommy Dee has already moved on to a new manager, it's like we're supposed to feel sorry for Vincent. And, when Vincent sings his own song at the end of the film, I think it's supposed to be some sort of triumph. But, I imagine Vincent singing his own music, sure, but also never getting out of that one club, just singing away because he can't give up on his dream.

The movie is, ostensibly about following your dreams... Sort of. Except, I'm not entirely sure what Vincent's dream is. Or at least what piece of it he gets out of pushing Tommy Dee and Caesare in his stead. 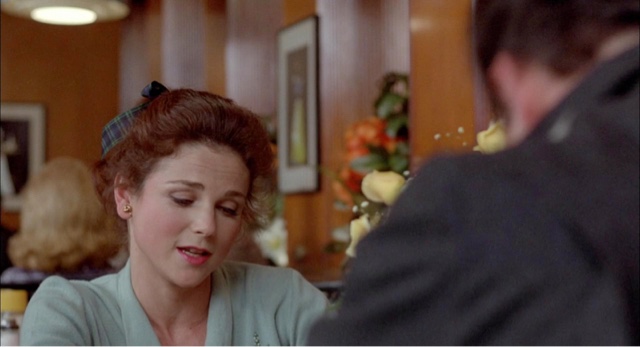 Meanwhile, Brenda is basically every woman who has ever had to put up with awful men (read: all men) and smile about it after. And, sure she goes to bed with Vincent because how else is she going to manage to use him like he's using her? The movie never really offers a reason Brenda would actually care for Vincent. She just does, because Hollywood. Or, she's doing what she has to do to get by, putting up with whatever comes her way, and doing it with a smile, because it's a man's world and while she may have found a little bit of power in it, she'd be nobody but for the grace of the men around her...

Focus the story on Tommy Dee or Caesare or Brenda and the film might work far better. Instead, we're with Vincent. He's not really the hero. He's the protagonist, but he's also the villain. He's every man who got a little bit of power, a little bit of money, and used and abused anyone he could to keep it.