everything’s urgent to a democrat

Coming on the heels of On Golden Pond, the central premise of Annie--that the presence of a kid will inject some life in an old man (though Daddy Warbucks is not as old as Norman Thayer, Jr, of course) is quite a cliché, but Annie is built of different stuff--a shallow surface of classist structures and a rags to riches plot that might as well be a romantic comedy (a little bit Pretty Woman). Oddly enough, it is also a big departure from the comic strip.

Oliver "Daddy" Warbucks was not even always a regular presence in the comic. In the place of Warbucks' secretary (or whatever her title is) Grace Farrell (Ann Reinking), there's a Mrs. Warbucks in the comic, and she is not the nice woman Grace is. She doesn't like Annie and sends her back to the orphanage more than once. (An orphanage run initially by Miss Asthma and then by Miss Treat.) The first time she tries to return Annie, a "society friend" sees her and she keeps Annie instead. Then Oliver returns from a business trip and immediately forms a connection with Annie, as do the house staff. Like in the film, Warbucks makes his money off the sale of arms, he's a Republican. He doesn't like Roosevelt's New Deal--which is a brief, and somewhat arbitrary subplot in the film, but Annie's interest in helping people is taken by Roosevelt as a sign that Warbucks might concede to running the program (though, technically, he would only be running one piece of the the New Deal, involving the National Parks and putting children to work), and the film allows the audience to infer the same. If Warbucks can take in this singular orphan, if he can eventually (seemingly; though, again, the film is vague on the specifics) take in some of the other orphans, of course he can help poor people. Nevermind the Bolsheviks wanting him dead.

In the comic, Warbucks is a pick yourself up by your bootstraps kind of Republican; September 28, 1924, after meeting Annie the previous day's strip, he tells his wife, "Annie doesn't need charity--just give her an even break and she'll do the rest." 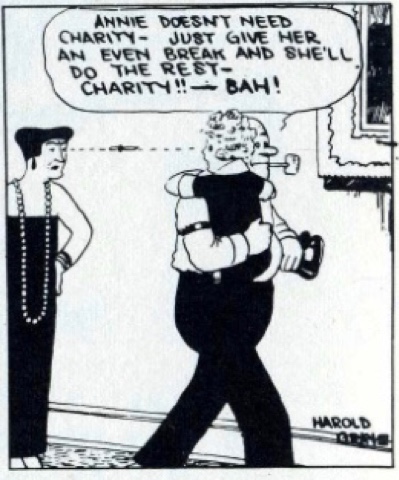 Annie epitomized Mr. Gray's personal convictions that all Americans should act with honor, independence of though, and industry, mind their own business and remain true to the traditional pioneering virtues.

Without putting much commentary on it, the film is set quite deliberately smack dab in the middle of the Great Depression. Miss Hannigan's bathtub gin, the street rats, the orphans. Warbucks has two teletype machines in his house, and can be seen looking at the ticker tape more than once. Warbucks has classic pieces of art around his house, and has the Mona Lisa hung in his bathroom, because "there's something interesting in that woman's smile [and he] might learn to like her." Warbucks has two bodyguards, dozens of staff, multiple cars, and a helicopter (that shouldn't actually exist for more than a decade, but hey they also watch a film that shouldn't exist for half a decade, so I guess that is just how rich Warbucks is). Mostly, the film is set when it is set because that is when the comic started. It ran from 1924 to 1974. The film is set in 1931...

Still, the result is enjoyable. At six, I like it in the theater. Watching it many times later, it maybe felt a little more silly, but it still worked. The basic plot still works. And, songs like "Easy Street" and "I Think I'm Gonna Like It Here" suggest a lot of the underlying classist themes that, however much I try to judge a movie on its own terms, I wish there was more of.

It helps that the titular orphan is effectively self-reliant but also in need of love. She is a nice conservative example for the kids in the audience. The lack of depth around Warbucks' side of the story is simply because the film aims for children more than adults. It is a fun little fantasy, but it also reinforces conservative values that most any parent might want to instill in their kids.