i may not be the classiest chick in this school

So, it comes down to this: what did I get from Grease 2 at six years old? And from all those many times watching it again over the next decade or more. I've already noted that 1982 may have been when I started to love musicals--three of them in my list of eight films for that year in this deconstruction of my childhood experience with movies. But, what else was there? For that matter, how do all these movies start to formulate together an explicit version of who I might be in the future?

I'm looking at the list so far and wondering just how many of these movies suggest the very thing I've suggested is wrong with the Grease films--that you need to change who you are to get with the people you want. From Arthur to The Fox and the Hound, from Meatballs to Blackbeard's Ghost, so many of these movies involve people either having to change who they are to be accepted, that the world demands you to be one way, and you better be that way or you will be shunned, you will be put down, and your world will be a mess so pain and shame and depression. None of these movies so far really get into the depth of that affect, but look at Copper and Tod who just want to be friends but can't because tradition puts them at odds with one another, look at Michael Carrington who just might have won Stephanie over with his vocabulary alone if he had just tutored her a bit more. (This film taught me the word "incestuous", by the way.) He's cute enough, and she is on her way to turning away from the Pink Lady / T-Bird dynamic. One can actually imagine Stephanie going off to college just in time for the Free Speech Movement and anti-war protests and second-wave feminism and embracing all of it.

Or maybe that's just my own hope.

That maybe, just by the fact that she's the lead here, she might amount to something better than the role life has offered her. Working class, tangential part of a motorcycle gang because maybe her daily life doesn't suggest anything better on the path ahead. We see the T-Birds working with the coach (it could just be their P.E. class--I assume it's after school since Stephanie is wearing pants) because for them, in 1961, varsity might feel like a way out of their lives, a ticket to college and something that doesn't, as they joke earlier, make them "a burden on society".

Watching the film as a kid I knew nothing about sixties politics, of course. I'd heard of Vietnam but I thought of this film as a 50s movie, and my mother talked about the 50s like Republicans might today--all positive stuff about how great it was, all the happy families with white picket fences and whatnot. I just wanted Michael to win Stephanie's attention and for Paulette to win Johnny's, and for Dolores to be happier (even if it took some pairing the spares to make it happen. Mr. Stuart and Miss Mason deserved to be happy, but mostly because they seem to like each other right away, not because lazy writing means they're the only adults in the film whose future might matter in regards to the story's themes. 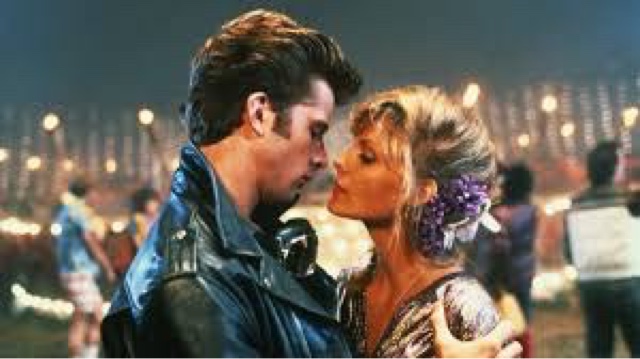 Romance, signing, motorcycle action (that felt much more exciting back then than it feels now; seriously, the chase that results in Michael's "death" is so short and kinda boring, now), some comedic bits, and the American Dream notion that anybody could succeed if they just try hard enough--this was a fantastic example of what a film could offer. And, while most of it went right over my head at the time, this thing was full of sexual innuendo that I'm sure what subconsciously fueling future problems for me.

Keep in mind, I'm growing up in a nice conservative religious environment, but this movie hit all the 50s nostalgia buttons for my mother, and that overpowered the sexually suggestive content. Meanwhile, all that stuff is going into my head either way, saved for later.