it’d have to be a real big woman

The problem with Arthur is that he is not a realistic drunk. Roger describes it well:

You might be tempted to think that "Arthur" would be a bore, because it is about a drunk who is always trying to tell you stories. You would be right if "Arthur" we're a party and you were attending it. But "Arthur" is a movie. And so its drunk, unlike real drunks, is more entertaining, more witty, more human, and more poignant than you are. He embodies, in fact, all the wonderful human qualities that drunks fondly, mistakenly believe the booze brings out in them.

Bob Mondello from All Things Considered, compares Arthur the lovable drunk to Shakespeare's Falstaff, or some vaudevillian. But, the movie warns us right away--not just with Arthur's obnoxious behavior while picking up then taking to a fancy restaurant the hooker Gloria (Anne de Salvo)--that Arthur is not a good guy. He may be funny, but, when the other hooker asks Arthur's driver Bitterman (Ted Ross), "Is there something wrong with him?" (and shes' got great delivery on that line), Bitterman replies, after only the briefest of pauses for thought, "Yes." Then, at the restaurant, Arthur bumps into his aunt and uncle, and his uncle pronounces him "very drunk," tells him to "grow up" and suggests, "You'd make a fine adult." Near the end of that same scene, when the hooker tells him her mother dies when she was 6 and her father raped her when she was 12, "So you had six relatively good years." This is one of the few times in the film where he shows regret after making a joke, but the joke is still there. One last reminded before the film really gets started the next morning that Arthur is horrible. At least when he is drunk. In his more sober moments, of course, Arthur is a good person. And he does seem like he could be a good adult. 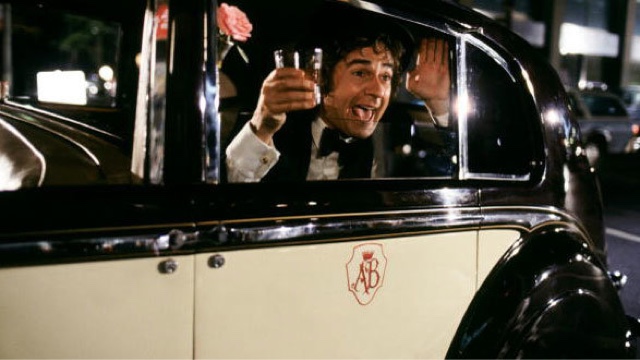 But, presenting an alcoholic this way is simplistic and potentially dangerous. Like drinking makes him awful. But, drinking is just the way Arthur deals with his problems. He was raised rich, was spoiled, and never had to become an adult. He has a massive train set in his bedroom, he reads the morning paper on a throne, his bathtub can fit several people and has an intercom set up for every room in his apparently (we actually only ever see about four rooms) large penthouse. (Author's note: I have lived in at least two apartments that would fit entirely inside Arthur's bedroom.) His family has their own building for whatever it is they do, or whatever it is the people that they pay do.

The bit in the Bach Building does include a great Hobson scene, though. After Arthur goes into his father's office to have a talk about marrying Susan, there is Paul Gleason, Vice Principal Richard Vernon himself, as an "Executive" who disparages Arthur. "He gets all that money," the Executive says, "Pays his family back by being a stinking drunk. It's enough to make you sick." Hobson, who has already displayed that he cares about Arthur and is willing to call him a "little shit" at least when out of earshot, says to the Executive, "I really wouldn't know, sir. I'm just a servant." Which is already a nice backhanded comment, because does the Executive really expect the servant to chime in to agree with him? But, Hobson adds, "On the other hand, go screw yourself."

Then, Arthur's privilege extends to random shoplifter, Linda, and we see just how easy he has it. Money means he can do whatever he wants. But, Arthur's great move is to make its titular drunk a nice guy. And, it occurred to me last night, between Dudley Moore's height and his 80s hair, and his incessant positive attitude, he's basically a modern-day hobbit. And, like Bilbo or Frodo, he wanders away from the Shire to find something different. He's supposed to stay with the rest of the hobbits, spend his money, eat his second breakfast, and just be rich.

Martha is Gandalf. Linda is the One Ring, or she's Samwise. Or Hobson is Gandalf, or Hobson is Samwise, or Aragorn... It's hard to map.