a fatal blow to the racist police state

Escape from New York didn't teach me anything about "white flight", of course. Its premise builds on the concept but the plot doesn't really play with it. Notably in how we never see what life is like for those outside the prison. In 1968, the Kerner Report warned, "Our nation is moving toward two societies, one black, one white--separate and unequal" and "cities will have Negro majorities by 1985 and the suburbs ringing them will remain largely all white unless there are major changes in Negro fertility rates, in migration settlement patterns or public policy" and argued, "The alternative is not blind repression or capitulation to lawlessness. It is the realization of common opportunities for all within a single society."

This entry will not all be so dense and full of historical quotes, but it will, as feels inevitable when spending time with Escape from New York, be political. 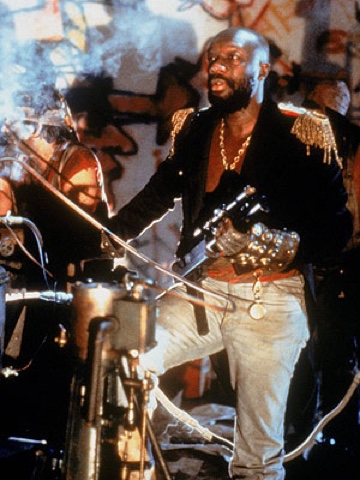 I mean, of course someone like The Duke would rise up in New York, would have a plan for getting across the one bridge that is still intact, would be intent on escape, even (especially) if by means of violence. That is what repression yields. And the repression in the prison island of New York is a special kind of repression. It's deliberate neglect and abandonment. This is still America, after all; you are supposed to pick your self up by your own bootstraps and get your own shit done, make your own way. That we might build a prison so big that the guards don't even have to be near the prisoners is, frankly, so obvious that I'm surprised we haven't managed such a thing yet...

Except inasmuch as we have. Because we have built enclaves of underprivileged, under-resourced, minorities. It hasn't always been a conscious effort. Leah Boustain, in an opinion piece for the New York Times writes:

Ta-Nehisi Coates refers to the white exodus as a "triumph of racist social engineering," and he is not wrong. Many white households moved to suburban towns precisely because black households were effectively like excluded from them by real estate agents and mortgage brokers. But that's not the whole story."

She goes on to argue the economic factors as well. Missing her own point a little, with lines like this: "Yet only a portion of white flight can be traced back to the now-classic dynamic of racial turnover. Cities were simply too segregated by race for many urban whites to encounter black neighbors." She ignores the affect of things like mean world syndrome or how eager (white) Americans are to blame the Other and run away from the Other or attack the Other, no matter how close they have ever actually been to that Other. We feared the Irish in the 1850s, the Italians in the 1920s, Chinese... well, always. Japanese in the 1940s, Communists in the 1920s, the 1950s, the 1960s, and ever since, though most of us don't even know what being a Communist means, or the difference between a Communist and a communist, a communist and a socialist, a socialist and a Marxist. Most of us have been nowhere near terrorists or terror attacks, nowhere near Muslims even, but far too many of us leap at the chance to go to war with them, to ban them from migrating here. Because it is easier to deliberately misunderstand and fear, easier to hate, than to connect, to understand and accept.

I mean, sure there were economic factors to the growth of suburbs; 1950s affluence made it possible for those with money to get out of crowded cities, have their own houses, their own yards, their own schools, their own everything. But, that situation at that time in America was inherently racially divided. Sure, there were economic factors, but they were created by racial factors and larger historical forces. Blacks left the south and moved into cities. Cities crowded out white folks who could now do better. So, they did.

And, in the cities, in the prisons like this film's New York, gangs ruled, violent revolutionaries ruled, and the good ol' real Americans, as it were, slept comfortably in their suburban homes, doing their best to ignore it. Until you get riots. Until you get violence at home. Black Lives Matte protestors become an extension of the enemy.

Look at the Broadway sequence in Escape from New York for example. Not the stage show early in the film, but when Snake and Cabbie and Maggie and Brain drive down Broadway and there is a mindless crowd of people lining the street, throwing things at their car, swinging things at their car. And it's easy to imagine that this mindless crowd, as well as the Crazies below the streets, was, when this film was made, exactly what good white folks imagined the inner city was like. Jump forward two years to National Lampoon's Vacation and the inner city is still a scary place even in a comedy that has no real investment in covering the subject. Jump forward another four years to Adventures in Babysitting and you get an update on the same idea. Going into the inner city of Chicago is like entering a horror film (or a gangster film). It is a place more suitable to Harry Callahan and Paul Kersey than any suburban teenagers, or any suburban folks at all.

Escape from New York is at once both a brilliant extrapolation and a deliberately shallow take of what white flight would mean for the urban environment. Snake Plissken is just stepping into the future shoes of Callahan and Kersey. The science fiction angle is actually a really thin skin on top of the same inner city story. Dirty Harry, Death Wish, Escape from New York. Change the surface a bit, but it is still the same American story. We fear criminals, we fear people with dark skin (and we assume that the two are one and the same), and we revere a white man bold enough to direct his violence against them.

No, when I saw this movie as a kid, I didn't get all that. But, the 80s was a series of action films about white men gunning down nameless, faceless, hordes of the Other. Inner city black. Vietnamese. Central American. Russian. Constant reminders... No. Constant lessons in how might makes right, and we have all the might.