forever is a long, long time

Backtracking a bit before really getting into The Fox and the Hound. I talked yesterday about the Mandela Effect, particularly related to how I never knew Tod's name had only one D, but also how many people remember Chief dying rather than just breaking his leg. But, there's another thing about The Fox and the Hound that vexes me. I couldn't be sure about it until the movie was over yesterday--and I had already posted the blog entry, so I couldn't add this then--that I had invented this (or maybe my mother did or one of my sisters; like, maybe it was a thing we said in response to the dialogue in the film and I just always remembered it as being actual dialogue. (If it is that, I am sure one of my sisters will chime in after I post this entry. The youngest two, at least, pay some attention to this blog.)

So, this is the thing (and this will actually tie in to the topic I expected to write about today, which is fortunate):

Copper and Tod, when they are still cute and small and best friends, have this exchange:

Copper: And you're mine too, Tod.

Tod: And we'll always be friends forever. Won't we?

First of all, a comment, because I totally never got the tone of Tod's question when I was five, watching this on the big screen. That "Won't we?" is so desperate and sad at the same time that it might be taken as hopeful. This need for this good thing that he has now has to last, has to be a permanent fixture in his life because that makes it more powerful. Having spent so much time with Groundhog Day and movies with similar themes, I must acknowledge that some things are much more powerful because they are fleeting, because they are finite, because they will be lost. Hell, that's why life itself can be so powerful, or why you need to treat it as such and carpe diem and all that--because it ends; you do not have time to A/B test every option of your day like Phil Connors does. You have to make choices and you have to live with them. 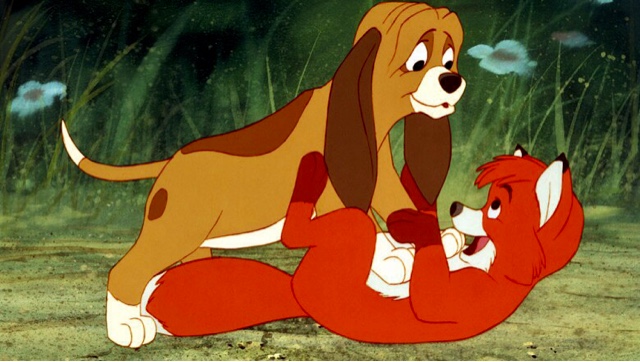 But, it is this out-of-the-mouths-of-babes kind of purity is what matters most in The Fox and the Hound--that friendship without social boundaries, without a real sense of the other, no us-and-them bullshit to get in the way of two little kids having fun together. And, the whole forever thing hangs a lampshade on that. Copper and Tod believe in forever.

And, despite my own upbringing--which I have talked about before--I think I also believed in forever. At least, watching The Fox and the Hound, I did. Because, in my head for decades now, that exchange between Copper and Tod was a little different.

Copper: And you're mine too, Tod.

Tod: And ever. Maybe even longer than that.

Now, whether I invented that last bit or my mother did, or one of my sisters, for years, if anyone said anything about "forever" I would add--sometimes under my breath because not everyone appreciates me quoting (or misquoting) movies in everyday conversation--"maybe even longer than that" because it was the natural ending to such a romantic notion as forever.

But, that line is not in The Fox and the Hound. In fact, a Google search of the phrase finds that phrase "maybe even longer than that" only in a Newsies fanfic from last October, a novel by H David Campbell called Jessica and the Mysterious Island, the novel Mulberry Park by Judy Duarte--and it leads into the concept of "forever" in all of these cases--and in a novel by Sheryl Woods called Mending Fences, a novel in the Quadrail series (can't tell which one because the google books version doesn't seem to have page numbers) by Timothy Zahn, and a nonfiction book by Paul V Kroskrity called Engaging Native American Publics: Linguistic Anthropology in a Collaborative Key--and it has no link to "forever" at all in these cases...

And then, I find this:

On the website for Jenn Elisabeth Photography, there is a page dedicated to a deceased plott hound / collie mix they named JD, there is this quote from "Disney":

"Copper, will we always always be friends?" Tod asked.

"Forever and ever," said Copper. "Maybe even longer than that."

Two possibilities emerge: 1) Jenn Elisabeth, professional photographer, grow up in the same alternate reality that I did, or 2) in some book version published by Disney (not Daniel P Mannix's original), the line went like that... And the only part that was an invention in my head was hearing it in the voices of Keith Coogan and Corey Feldman.

One third thing is entirely for sure, though: Jenn Elisabeth was raised on forever as a romantic ideal. She memorializes her dog with these lines from The Fox and the Hound because that is the romanticized version of a pet, too; you want them to last forever. You get a new puppy, a new kitten, a new whatever, you don't imagine them dying. You don't jump forward to the darker parts of it, you embrace the joy of this adorable little animal, the illusion of unconditional love (in both directions). (Amusingly, as I was typing that sentence, my daughter had to kick the smallest of our cats out of her room for being a property-damaging nuisance.)

It would be another five years before a movie (Highlander) would really tell me that forever has its downsides--with Queen's "Who Wants to Live Forever?" spelling it out probably just above my conscious mind, my conscious mind being way too focused on and fascinated by swords and beheadings. Really, I didn't see that downside (and didn't really fall in love with that Queen soundtrack) until I was a teenager and I owned my own copy of Highlander on VHS. Ministers at church, teachers in school, my parents, plenty of mainstream movies--all telling me that the world is going to end soon, with fire and brimstone and all that, and here I am not only loving this film for the romanticization of forever, but expanding it (or maybe stealing that expansion from a book version, but the actual source doesn't matter as much as my memory of the film for many years now including the expansion). Friendship could not only conquer the adversity of different cultures, different genera (I just learned that was the plural of genus)--different races really--but could conquer the impending end of the world.