I decided last night, after innumerable viewings of Halloween II over the course of the past 36 years, that Laurie does not shoot Michael in the eyes. I mean, yeah, he's purely and simply evil, and he's got some Cult of the Thorn pseudo-immortality going on, but as soon as Michael was back for The Return of Michael Myers in '88, it was either suspend my disbelief over eyes healing, accept that it takes 7 years for eyes to grow back when you've got cult of the thorn magic in you (even though the specifics of the Cult of the Thorn were still a couple movies off)...

Or, the obvious option, which didn't occur to me until last night. 1) Laurie does not shoot Michael in the eyes. She shoots him, sure. But, she is not that good (or lucky) with a gun. 2) Michael, being all supernatural evil and serving the (incorrectly identified) Celtic Lord of the Dead Samhain, cries blood. It's not just an interesting visual, blood coming down like tears. It's tears. Michael is crying. 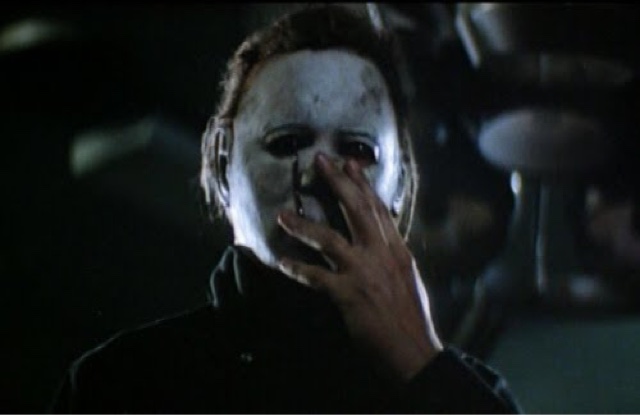 His baby sister has actually recognized him. Called him by his name. And, that's all he really wants. Sure, the Samhain/Cult of the Thorn stuff means he's got a tendency toward killing people. And, I argued before:

In the very same film that is telling us he is doing all of this on a path to killing his remaining sister, Michael is going out of his way to do so much more, slashing the tires in the parking lot, killing the orderly and the nurse, killing the doctor, cutting the power. Michael could have simply found Laurie and killed her, but he goes above and beyond.

Michael doesn't want to kill his baby sister. He surely feels an urge to do so, but he really just wants to be loved. Some old balding guy that yells a lot can call him Michael and it doesn't phase him. But, when Laurie calls him by his name, he knows she knows who he is, he knows that everything would have been just fine if his little sister has been around for him to raise her up better than his older sister. Regarding Clover's (1987, 1992) psychosexual fury, I wrote before, the reason Michael killed his big sister Judith was because "he cannot fathom the idea of sexual intercourse when faced with it." Maybe the Myers family was very religious, or maybe Michael was on the spectrum, or the Cult of the Thorn's efforts altered the boy's brain chemistry--whatever the reason, Michael just didn't know anything about sex. And, neither would baby Laurie... Well, she was 2 years old when Michael killed Judith, actually, so toddler Laurie is more accurate... Actually, toddler Cynthia. In a better world, Michael would have taken toddler Cynthia with him, and they would have struck out on the road, away from sinners like Judith and Daniel, away from Peter and Edith Myers (their parents). And, he could have taken Cynthia safely away from the Cult of the Thorn (because surely that kind of superstitious cult was localized to Illinois).

Michael is not some cruel murderer. He doesn't kill because he enjoys it. He kills because he has to. He kills people that are not Laurie because deep down inside he hopes that will suffice and Samhain will not demand that he kill toddler Cynthia (who is now not such a toddler anymore).

1) Michael could easily have killed Laurie the first time he found her when he returned to Haddonfield. But, he doesn't. He follows her. Not because he doesn't recognize her. Surely, his Cult of the Thorn magic would include some targeting even if a brother couldn't recognize his sister. No, he follows her because he needs to know that she is not a sinner like Judith was. In fact, he makes no effort to kill her until a) she interrupts his tableau of death and b) she has been set up with Ben Tramer. (To be fair to Laurie, Annie set it up, and she would have in-set it up if Michael hadn't have killed her for being a fornicating sinner.) Michael is what Dexter Morgan wishes he was. Fueled by strange cultists and Celtic gods, Michael has to kill. He's supposed to sacrifice his family. But, he's a little more strong-willed than to just go along with it. At the age of 6, Michael was plenty big enough and strong enough to easily kill his older sister, and he could easily have killed his parents, too, I'm sure. But, he waited until Judith deserved it. She had premarital sex, she had to die.

2) Michael could revel in his killings. And, some might think that putting the bodies on display in the Doyle house was some sort of twisted celebration. But, that was an offering. Michael set out the three bodies, and even dragged Judith's grave marker there as a reminder of his previous kill, because he was only doing this because Samhain demanded it, the Cult of the Thorn dictated it. Luis Enrique Victoria, writing for Movie Pilot, describes the way Dick Warlock plays Michael in Halloween II versus the way Nick Castle played him in the original:

In the first film, he walks with swiftness and grace, and in the rest of the [later] films he walks much faster, so you can feel that he is angry as he brutally attacks his victims. However to me that actually seems too cliche even for an iconic character.

A quick interruption: that Michael walks faster later and is angrier would fit with today's interpretation; the mere existence of Jamie Lloyd means that Cynthia at some point gave in to that evil urge to have sex--and now I'm imagining Edith Myers being a little bit like Margaret White, all "I should've killed myself when he put it in me" and talking about "dirty pillows" and constantly seeing Michael, the second child, as some horrible sin-fueled slight against God. The first child could be forgiven; God did instruct people to go forth and multiply. But, having another one, having sex another time--that was prideful, lustful, sinful. Jamie being born means at some point Cynthia had sex. Presumably she was married; or maybe original-timeline Laurie changed her last name just like H20-timeline Laurie did, to hide. But, now that I've got Margaret White in my head in the guise of Edith Myers, marriage doesn't mean sex isn't still sinful.

In Halloween II, Michael's walk is slow, robotic, and you can' true ally know whether he is angry or calm, because he displays no emotion whatsoever in his mannerisms. That makes him absolutely frightening. He doesn't just attack his victims, he sneaks up on them, kills them with the elements of surprise, and it is really awesome yet scary to watch.

Actually, the sneaking up, element of surprise thing is problematic for me. I'm arguing that Michael is not enjoying himself. But, aside from Alice Martin (which is hard to explain) and the Marshall (much easier to explain as Michael had just been knocked down and the Marshall got too close), Michael has an odd way of sneaking up on people in this film. He doesn't just sneak up and kill. He sneaks up, waits to be seen, and then he kills. On the one hand, since we cannot see his facial expressions, one might think he is having fun. He wants to see the horror and recognition of imminent death. But, if there's any joy there, I would argue, it is a childish glee at surprising someone, not a psychopathic killer's. In fact, making it a little bit like a game, Michael is trying to make death more pleasant.

(Which also could explain his reasoning behind draining Nurse Alves of her blood; she's working the late night shift and she was probably taking a quick nap in that hospital bed and Michael found her. He could wake her before killing her, but why not keep it more peaceful? So, he very carefully gets an IV needle into her arm (and he's probably seen those a lot at Smith's Grove) and just in case she wakes up before enough blood is gone for her to die, he straps her down, and he lets her sleep through her death. It's actually quite humane.)

In the end, he has killed all these other people, has found Cynthia all grown up--and with a gun at her feet--and he's surely going to have to kill her still. He doesn't want to. He has to. Then, she calls him "Michael" and he hesitates. He's conflicted. He moves toward her and she tells him to stop, and he wants to stop, but then she shoots him. Not in the eyes. Little toddler Cynthia could never be that good with a gun. But, that she shot him at all, makes him sad. Makes him cry. And, then he plays one more game. He covers his eyes to give her another chance to get away. Another game of hide-and-seek.