not such a bad place to go

So, the structure could use some work, but the performances are amazing. That's the short version. Roger Ebert writes in his review about leaving "the theater feeling good and warm, and with a certain resolve to try to mend my own relationships and learn to start listening better." On Golden Pond is mostly the tale of an old couple, still adorable with one another, and the "grandson" they take in at their lakeside summer home. The father/daughter stuff is there, mostly under the surface, but it's almost apt--almost--that it remains off to the side, not quite... there.

Because, that's how it is for Chelsea and, especially, for Norman. For Chelsea, her problems with her father are deep-seated, so much a fundamental piece of who she is (especially when she comes back to Golden Pond) that it makes sense she has trouble talking about it, expressing it, confronting it. For Norman, his failing memory can't help matters. Plus, he doesn't even realize how he was with Chelsea, the insecurities he wakes in here, the hang ups he gave her so long ago. Early in the film, he asks after a photo (that is a real photo of Henry Fonda, Jane as a baby, and her mother (Henry's second wife) France's Seymour Brokaw), "Who the hell is that?" He doesn't recognize himself. He doesn't recognize his daughter. He doesn't recognize whoever the woman is in context of the film. Norman exists in a perpetual sort of present, or close to it. When Ethel is around, he does okay. When he's fishing with Billy, he does okay. But, on his own, he has trouble. He gets lost in the woods while picking strawberries.. He forgets he called the operator. But, he faces this with a good nature and a sarcastic wit. He faces Chelsea... Well, no, he never really faces Chelsea. When she goes skinny dipping with her mother, Norman stays inside, talks to Bill and then Billy. His line about Chelsea not liking to play games is dismissive of her even as Bill is effectively inviting her into the game and into the family's interactions.

For the film, this stuff is both the weakest parts--for reasons I outlined yesterday--and some of the strongest, because it sticks with you. Not because of its depth, but because of its realism. The details don't matter when there are problems between father and daughter. Old slights grow and fester, become something bigger than they ever were. And, if you were a kid when the slights happened, they are pieces of who you are, and when it was a parent's slight, it will always be huge. Even when you get older and think you can do without your parents, you want for them, want for their approval...

I don't think I'm saying what I want to say as clearly as I mean to say it. But that, too, is appropriate, I suppose.

We have the people that are fixtures in our lives. We need certain things from them. When we don't have it, the world might as well be torn open.

But, however much the Chelsea-Norman stuff is weak here, it is not because it doesn't make sense. Open wounds like Chelsea's are not easy to put into words. And, those open wounds can be twisted right up next to the good feelings that those same people give you. Family is not simple business. It's pain and comfort, both aged and ingrained.

As Roger puts it,

If Hepburn and Henry Fonda are legends, seen in the twilight of their lives, and if we've heard that Jane and Henry have had some of the same problems offscreen that they have in this story, does that make the movie simple gossip? No, not if the movie deals honestly with the problems, as this one does.

Honestly, but not necessarily thoroughly.

As people, they have apparently learned something about loving and caring that, as actors, they are able to communicate, even though the medium of this imperfect script.

And, there is the important detail. Even an imperfect script can make for a film that is, maybe not perfect, but far from imperfect.

Watching the movie, I felt I was witnessing something rare and valuable. 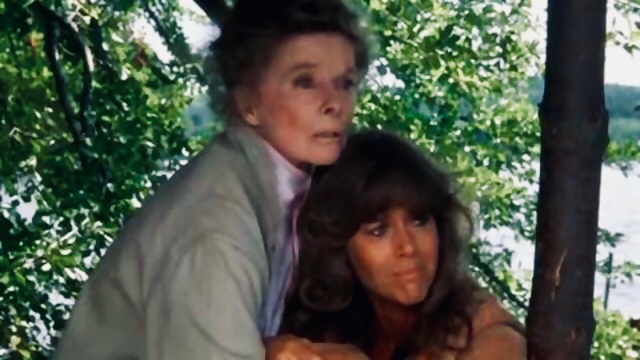