play it 'til the bitter end

Today’s reason to repeat a day forever: to play games, lots of games. Life would be so very boring without them. Tonight, My kids and I played three games. The four of us played Zombie Dice, then Munchkin (but Hayley had to opt out part way through that game to work on a paper for school), then finally the Game of Life. Even Phil Connors realizes games are something worth putting effort into, as you can see in this deleted scene:

My character’s name when the game began was something Hispanic—I can’t remember what because he got lost on his second turn and hit his head in a fall in the mountains and came down from the mountains calling himself The Man From the Mountain and he had three furry wives he found in a cave. They were named Dorene, Lorene and Morene. They had one daughter—Symphony—and adopted a son called Clever Boy who was caught burglarizing their lovely little home: 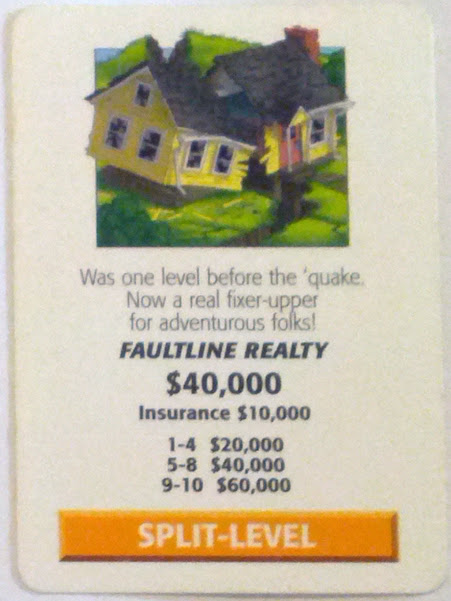 Saer, playing as Maria… Johnson or Jackson, won the game. She had too many kids for her one car but paid $20,000 to expand it for the extra kid because her other options were to have a child (or her husband) die and pay $10,000 for the funeral or buy a new car (the option Kieran, playing as President Juan, took) for $50,000. Making up new rules on the spot was rather fun and freeing. Like living the same day over again—

See what I did there?

--inventing rules from special knowledge that comes from special circumstance. Or like white privilege, I suppose. We enjoy advantage where advantage presents itself. And, life goes as well as we can have it go. Games aren’t much different. There are winners, there are losers, there are interesting twists and turns along the way. Sometimes, you get shot in the head before you can eat enough brains to catch up, sometimes your Tuba of Charm helps you run away from monsters so you can live to fight a better fight another day, and sometimes you are forced to host an online concert for $100,000. And, sometimes you just sit around and watch Groundhog Day. Sometimes you go hungry, or a loved one dies. Sometimes you win an award or read a book or write a paper or sing a song or judge desserts your daughter and her mother made based on taste and presentation (did that one today), sometimes you name your Minecraft horse Tyrone and ride him back and forth on supply runs between the storage room at the central train station and Castle Riddle (did that one today, also). Sometimes you lose your job and have to decide what bill needs to be paid first because you just cannot pay them all today if you want your kids to eat.

Wednesday night, I read a poem at the open mic that opened with these lines:

In a novel I wrote more than a decade ago, Twice Into the Same River, Olivia got into a bit of a rant that included this:

I’m not trying to say my life is even the worst one anyone’s ever had. I’m not that arrogant. I’m just saying, there’s always something worse, always something different. One person loses the love of their life. One person loses a child. One person loses a limb. One person loses his sight or she loses her hearing. Or she chooses to kill her own child before it’s born because life will be too difficult when it comes. Or takes a job he doesn’t want because his passion in life just isn’t going to let him make it in our society. Or she gives up her dream of being a dancer because she’s got to take care of her ailing mother. Or he gives up his dream of playing professional football after he gets into an accident and gets paralyzed from the waist down. Or she learns that she’ll never get to have any kids because of an infection that could have been gotten rid of if she’d just gone to the doctor sooner. Or he learns he’s got three months left to live and it’s just going to be a painful ride the whole way. No one has it easy. The problems may be big or small, but they’re still problems. They still hurt. And, as they say, everything’s relative. One guy’s fear of going bald could really hurt him as much as another losing an eye. It just depends. And, I don’t pretend that there aren’t others out there that could have gone through what I went through and come out unscathed or come out well enough to live a life that at least resembled something normal.

I’d prefer, of course, that we all experience the fun of games and the joy of life with people we care about than any particularly unbearable pain. I wouldn’t recommend, though, that we experience no pain at all, no loss. The negative bits—they make the positive bits just that much better by comparison. They make life worth living.

Once, twice, or however many times we get to live or pretend to live.