you must really enjoy it

I cannot decide if it’s weird that the first thing I wanted to check in the third revision of the Groundhog Day screenplay was O’Reilly’s name—the paramedic Bud refers to him as ol’ Reilly (recall, there was a weird typo in the second revision that made the name semi-unreadable). And, in the deleted scene, the paramedic calls him ol’ Jedson. See:

I haven’t read the third revision yet. I may do so tomorrow. And, I figure that it will take me at least three entries to pick it apart.

As it was with Rubin’s original:

Or the three days I spent breaking down the structure of the “screenplay” of the final film:

For now, having only glanced through the thing, I did find a couple notable things.

The end of god day, for example, is a little weird. Instead of telling his Virgin Islands story to Ralph and Gus at the bar, Phil tells it to Rita. And, Rita’s “thousand lifetimes" line comes across a lot less... real.

Sometimes I wish I had a thousand lifetimes. One to be a great journalist. One to, I don’t know, go back to school, study art, or auto mechanics. One just to take care of all the busywork, you know, pay the bills get my car tuned up. One to be the wild woman of Borneo. One to be Mother Theresa. Maybe it’s not a curse, Phil. It all just depends on how you look at it. (Ramis, 1992, January 30, p. 101)

First, as I suggested, this seems less like something someone might actually say. Second, Rita fantasizes about paying the bills and getting her car fixed? I think she has confused real life concerns with outlandish fantasy. The Borneo bit almost makes up for it, I guess.

This “third revision” is probably actually like the fifth real draft of the screenplay, by the way. In How to Write Groundhog Day, Rubin lists the “major drafts” as follows:

6. The shooting script. This final pull-together was done a couple of days before shooting by Harold. An additional scene (the opening scene at the news station in Pittsburgh) was shot after the movie wrapped, written by Harold

That list would put my “second revision” as specifically Ramis’ second revision, #4 on that list, which had input from Bill Murray. And, this “third revision” would be among those “partial drafts” listed in #5. I still have not found anywhere online to obtain either Rubin’s revision or the shooting script. But, even the shooting script would not include the WPBH stuff from the beginning of the movie. I think I may take the time to format my transcript—

(Here is the latest version, with all entry titles noted up to today’s.)

—so it works as a retroactive shooting script.

And, I must read this version tomorrow for sure. I just glanced through it again and got stuck reading a bit right in the middle—the “slut named ANGIE and another overweight, not very pretty MADONNA WANNA-BE, both in too-tight jeans and bullet bras” are still in there. And, I noticed near the end that Phil calls Ned an asshole. It’s surprising how R-Rated (or at least PG-13) Ramis’ version still is at this point. I remember someone in Woodstock... I think, mentioning that they didn’t want their kids to see the movie yet. There was some implication about the “sex” scene with Nancy being the issue. But, relative to other Ramis films, Groundhog Day is actually a fairly wholesome comedy that I think is suitable for the whole family. Looking at Ramis’ “third revision” of the script, it looks like that wasn’t the case until, well, maybe right up until shooting. Production in Woodstock was in March and April—

(I don’t know how the filming actually ended up going, but in this letter on display in the Woodstock library, you can see that filming was scheduled to start on March 18 and continue for about five weeks on the square.) 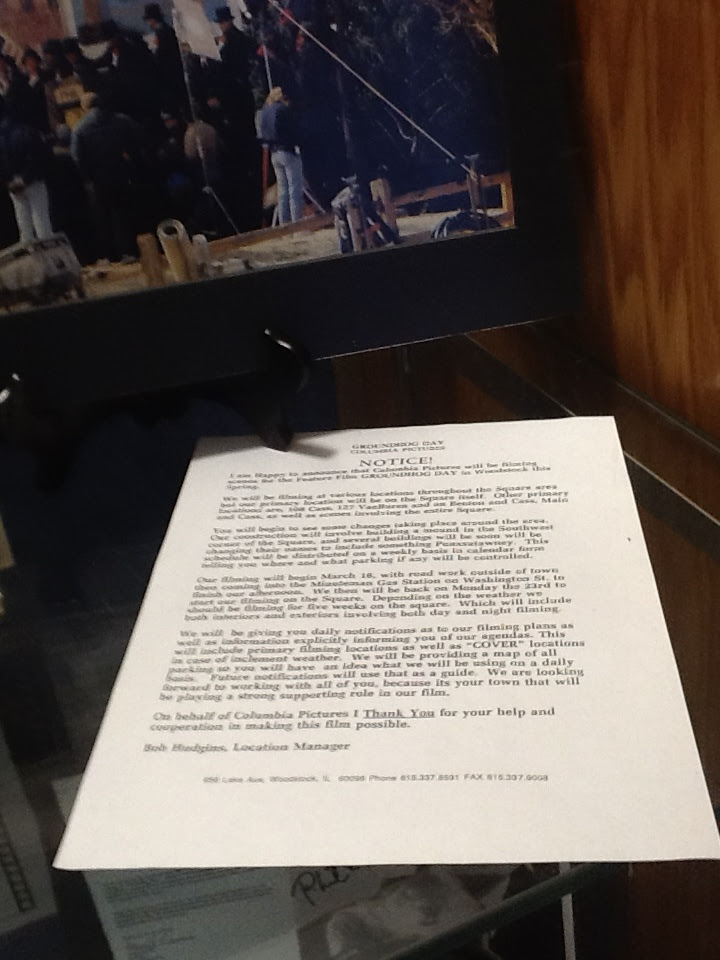 —and this draft is dated the end of January.

But, I was talking about O’Reilly, wasn’t I? I’m not sure why I want characters to have names. In one screenplay I wrote, I deliberately avoided the names of the two main characters but made sure that every bit part—a waiter and a gas station attendant, for example—had names. It was a thing, maybe a little pretentious. Names matter… even if I make them up.

Today’s reason to repeat a day forever: to learn the names for everyone.