“Everybody dies sooner or later. Don’t worry about your death. Worry about your life. Take charge of your life for as long as it lasts.” – Littlefinger, Games of Thrones

Inevitably, a) yes, everyone’s going to die and b) even scoundrels like Littlefinger get something right.

There was, at least once, a day in which “saying that ‘Groundhog Day demonstrates the wonder of living each moment as a totally new event’ seem[ed] both trite and tired.”

There was a day once when Groundhog Day was a brand new thing for me, sitting in a dark movie theater. I knew Bill Murray from the likes of Meatballs and Stripes and Ghostbusters and Ghostbusters II and Caddyshack and Scrooged and Little Shop of Horrors and What About Bob?—

(That last one, for example, I watched at the house of a girl I had a thing for in high school. She was two years older than and one year ahead of me. We’d gone out once, saw Scent of a Woman. Then, she invited me over to her house and we watched What About Bob?. This would have been about the time that Groundhog Day came out, actually. There’s a story for everything.)

—probably some other thing I can’t remember. I’m sure I saw him on Letterman more than once. I started watching the late night talk shows when I was maybe 10 or 11 on a small—screen was maybe 4 inches—black and white TV I got at a yard sale near Lacy Park in San Marino, California. I lived in Pasadena at the time, in the same house in which I was born. A few years back when considering the setting of bedtimes for my kids, I tried to remember when my bedtime was set to certain hours. I remember being allowed to watch some 10 o’clock shows like Moonlighting or Cagney and Lacey or Remington Steele in the mid 80s, but I also remember watching L.A. Law secretively on my little black and white TV when I was already in bed. And, I would stay up and watch The Tonight Show and Letterman often as well.

All that is to say that, while Groundhog Day was once something with which I was unfamiliar, I did know Bill Murray already. I knew Andie MacDowell primarily from Greystoke, though I had seen St. Elmo’s Fire. I knew Chris Elliott from Letterman and Get a Life. I wouldn’t have recognized anyone else in the movie and Harold Ramis wasn’t a director I would have known by name at the time. Stephen Spielberg or Oliver Stone, maybe. Ramis, not so much.

There have been days where I barely paid attention to Groundhog Day and days I have sat rapt with attention. I’ve watched it in planes, in cars, outdoors, indoors, on an iPod, on an iPad, on a computer monitor, on a TV, on the big screen, sitting by a campfire, sitting in a pool. And, I’ve written about so many different topics that I often sit down to this blog with no plan in mind. I wing it. Though this rambling may seem like that kind of situation, it isn’t. Tonight’s entry comes from the end of yesterday’s—that Heraclitus line. I knew I’d referenced it before in this blog. Really, it’s a perfect quotation for dealing with Groundhog Day.

Robb Moss, director of a documentary called The Same River Twice points out (in Erin Trahan’s Sundance review of the movie) that we don’t ever step into the same river twice, and he references Groundhog Day. He says:

So can one step in the same river twice? No. Moss gives the example that even in GROUNDHOG'S DAY Bill Murray does not step in the same river. "Each day is different. It's always changing. In his case, he figures something out." And in Moss's case? He looks out the window and says he doesn't know. Thank goodness the river does.

For the record, he is, apparently, one of those people who insists on calling it Groundhog’s Day. They are everywhere, even in Woodstock, where they filmed most of the movie: 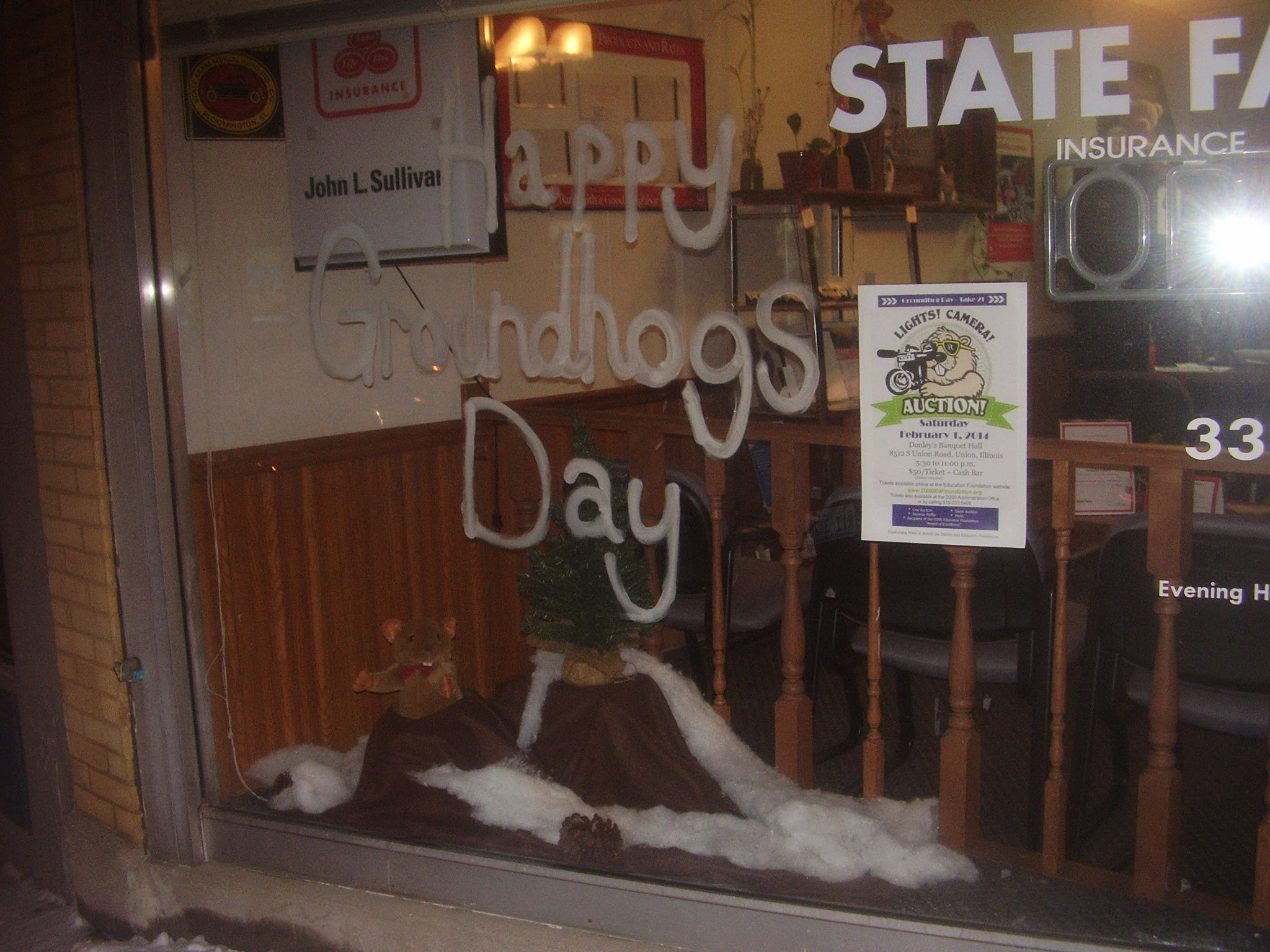 But anyway, this is the Synopsis on the documentary’s official website:

If you could look your future in the eye, would it recognize you?

In 1978, on a breath-taking trip in the Grand Canyon, filmmaker Robb Moss and a group of free-spirited friends and lovers took a month-long trip down the Colorado River. Cutting between footage of their youthful, often naked, unscheduled lives and the complex realities of their adulthood today, the film creates a compelling portrait of cultural metamorphosis. From running rapids to running for mayor, The Same River Twice is a story of change, choices, and of finding one's place in the world.

I haven’t seen it but I would like to. The juxtaposition of young lives with their future selves is an interesting idea. Writing above about my familiarity with Murray and MacDowell and Elliott, I figure my younger self would recognize me pretty readily. He might not even be surprised that I’m doing what I’m doing now with The Groundhog Day Project. He’s seen enough science fiction, and he’s even been on a couple online bulletin boards already—I’m talking about my 1993 self, specifically—so he would marvel at the modern internet and world wide web, but he could probably accept its scope easily enough. He’s been accepted into USC already and wants to go to film school, even though at the prom they’d call him the future Stephen King not the future Stephen Spielberg. He might question why I’m not a TVF major instead of Communication Studies, but then, if he’s smart, he’d get over all that and ask me about major sporting events’ results and whatnot so he can Biff Tannen his way through the 90s…

Would I tell him?

Better question: would I even know any sporting event information for him to bet on? I could give him some presidential election results, I suppose, but I doubt betting on those would have a huge reward. I probably couldn’t help him with much. I’m not even sure I’d want to. I could tell him to pick up on some hints with the girl Jonna in Spanish class and ask her out, but then what becomes of the social life I didn’t have in my 20s? Do I write the novels I’ve written? Do I meet Katie and Miranda and Sarah, marry the latter and have my three kids today?

I wish my 20s had been more… interesting, certainly. But, changing them? That’s a big causality no-no.

But, I’ve seen The Butterfly Effect and I think I could handle giving my younger self a few pointers, help him get a better handle on things, and see how that goes. As long as I can still reset things back to the way they were before if things don’t go so well.

Or maybe it’s not worth the risk.

There’s a podcast called Designing Yourself that last fall quoted those Robert Frost lines made so famous by The Outsiders:

In response, the podcasters, Paul McLeer and Whitney Hess, get talking and… I was going to paste and excerpt, but scrolling through the transcript, the bit is rather long. And, it turns to Groundhog Day pretty quickly. Whitney calls it “a poignant movie.”

It's about impermanence. It's about free will. It's about the desire to change yourself for the better and that every day is a new day and a new chance to make a new life and that if we're lucky enough to be given an unlimited number of days that we'll get it right eventually if we keep trying, but we can't give up.

We could probably have a whole show about "Groundhog Day," and how that could be a metaphor for life, but the beauty of it is that the construct of what we think of as life is kind of thrown in our face in that movie, and it says, You know what? Let's say we're not going to change stuff, and you're the only thing that can change.

Amusingly (for me), a blogger at the International Academy of Intuitive Entrepreneurs, sort of counters all this positivity with this:

In contrast, Infinite Time, or perpetual sameness, feels lifeless, boring and provides a kind of numbing existence. Do you remember Bill Murray in the movie Groundhog Day? Take out the poetic direction and moral of the story and what’s left? Excruciatingly dull replication.

But, replication isn’t dull because replication isn’t possible. Nothing is ever the same, the river, the man, the movie… Every day, when Groundhog Day is on, it’s a different movie for me than it was the day before. When I was toying with the idea of doing this project last July, sitting outside in Oldtown Pasadena watching the movie on an outdoor screen, I both couldn’t have imagined how much has gone into and come out of doing this blog and could imagine all of this and more. That guy sees it as a shallower adventure than it has become, but no matter how serious I get sometimes, it is still a shallow adventure too. Me last July is right. Me in 1993 is right, and probably pissed off I won’t make him some money, but he probably understands that I wouldn’t know sports scores because he doesn’t pay attention to sports either, but he also knows I’ve seen Back to the Future 2 because he has, and I counter with a little Back to the Future and Doc Brown’s warning about changing the future, to which he’d probably counter with the end of Back to the Future 3…

My point is this, I suppose: there’s no reason to be afraid of change (in the present) because life is nothing but change, every day, every hour, every minute, every second. Do what you gotta do, as long as you are “a proposition which was true in [Abraham Lincoln’s] time, just as it's true today. Be excellent to each other…

Today’s reason to repeat a day forever: to have an excellent adventure.