i thought you were supposed to disappear

Note: I've only read half of the recently discovered "third revision" of the screenplay, so I won't get into picking that apart just yet. Today, I've watched 3 more episodes of Tru Calling and, while I don't intend to go episode by episode like I did with Day Break, I figured I'd share some thoughts.

Also, I've had some thought about the future of The Groundhog Day Project after Day 365.

Episode 6 - "Star-Crossed" - Turns out Davis (Tru's boss) knows what she can do, so there's a brief conversation about it, and she's got a great response to Davis calling her repeat-a-day gig "a gift." She says, "Candles are gifts, boots, bath salts maybe, but this is... I don't know what this is..."

My first problem (for this entry, not my first problem with the show; that would be the lame, 90s-indie-band-that-never-made-it-big theme song) here is the more Tru does this, especially now with her brother's help and Davis' help, the faster things will go with each investigation--and, really, there won't be investigations much all the time, since she generally has the victim's names plus time- and cause-of-death--so she's got a ton of extra time in each resumption to make the best of her own day, a la Phil Connors.

Case-in-point: Episode 5 - "Haunted" - Tru aces her MCAT but then on the resumption it comes down to a choice between doing that again or saving a life. It's a big symbolic thing, Tru embracing her role with the whole Groundhog Day life-saving scenario. But, she gets to the exam late, can still pull it off and go save a life... actually, in retrospect at the end of the episode, it would seem she may have already saved that life--

(paranthetical SPOILERS for a TV episode from 11 years ago: victim originally died presumably from a drug injection, maybe, but turns out she and her med-school friends are running a Flatliners deal to bring out repressed memories--don't ask. Tru is there to help revive her (which could mean she doesn't get that injection that presumably killed her), but then sitting in the MCAT room, Tru realizes that victim is going to go face the guy who victimized her as a kid--no reason to assume that guy will inject her with anything by the way (my thought was repressed memories were actually going to lead the girl to kill herself for a nice downer ending); in fact, faced with the girl knowing what he did to her, he proceeds to strangle her, only to be interrupted by Tru. So, no injection, and and not (necessarily) a death anymore either, and Tru gave up on the MCAT for another year for this? It's a bad turn for a story with a strong heroine at the center that she has to give up something important to her to get on with the role forced upon her. Kinda anti-feminist.)

--but she still gave up her goals for another year. It's like if Phil's lesson of serving others wasn't something that came to him organically over (a long long) time but was forced on him by him happening upon dead O'Reilly in the alley and O'Reilly turned suddenly to him, said "save me" and, scene after scene flashes by, and Phil wakes up at the Cherry Street Inn.

My next problem--like my talk of "the other day" thing way back when--is for a show focused on the flow of time, this show has no real sense of the passage thereof. Case in point, between the previous episode (5) and the one playing as I write this (6), it has been, like, two days. Seriously, MCAT day repeated, then the Davis conversation was that night, this episode began in that same conversation and went on to--according to the basics of editing--the very next day, which is now repeating. So, Tru met Luc yesterday, but Gardez says they've "been doing the mating dance for weeks now." Even if we ignored the editing and went with the usual timeframe for TV shows--one week per episode--it has still not been weeks. And, we have seen every interaction between Tru and Luc--totaling in the current reality--what?--four very brief conversations, and a) Luc is asking her out already? Well, sure, it's TV and Eliza Dushku and Matt Bomer are beautiful people and in TV Land that means they must get together. b) Gardez has been there for none of their conversations until this one in which Luc is asking her out. 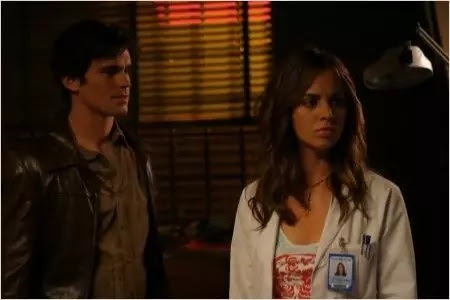 My next problem--another time related thing--is does Tru never listen when they guess on time-of-death? Bodies have come in at night each episode, yet in the "Haunted" episode, Tru thinks she saved the girl's life midday, and now in "Star-Crossed" Tru keeps the victims from rather publicly crashing to their deaths, again midday, when she was there at the fresh crash site at night. And, you don't need to stalk someone all day or interrogate every one she knows to figure out who wants her dead if you just pay attention to, say, time- and location-of-death and get there first.

As this episode ends, my thought is that this show needs more of Tru trying to get her life (and her brother's and her sister's lives) together in addition to the victim-of-the-week thing. More of the Groundhog Day meaningfulness to make it seem less like a cheap high concept grafted onto a murder mystery show.

Also, I want to see Tru deal realistically with a dead body that doesn't ask for her help. I mean, not everyone can be saved--see Phil trying to save the Old Man in Groundhog Day--but given her ability lately to save all these people, how messed up emotionally might that leave her?

Maybe I am asking for too much realism from the time-loop, talking dead body show.

Today's reason to repeat a day forever: to forego realism and figure out how to fly.

...or to remember that I mentioned the future of this blog up above--seriously, I was about to copy and paste this into blogger when I realized I hadn't gotten back to that. I'll keep it simple, for now, because this is still more of an idea than a plan. Groundhog Day will go for 365 days. Then, I will bring in other movies, each one lasting 7 days, give me time to review them, pick them apart for philosophical notions, filmmaking stuff, whatever comes up, but not to linger. And, after say 4 movies maybe I'll throw in a little Groundhog Day screening again. Groundhog Day will be like the baseline by which to measure all other films, then.

Today's (other) reason to repeat a day forever: to remember everything I say.

Today's (third) reason to repeat a day forever: to watch every movie ever made to prepare some great options for this blog.