what are you dying of?

Tomorrow may be more complicated. I imagine a rundown of Tom Cruise’s character in Edge of Tomorrow as Christ-Figure per the Kozlovic Scale. And, I might post a clip from that movie (or from The Daily Show). 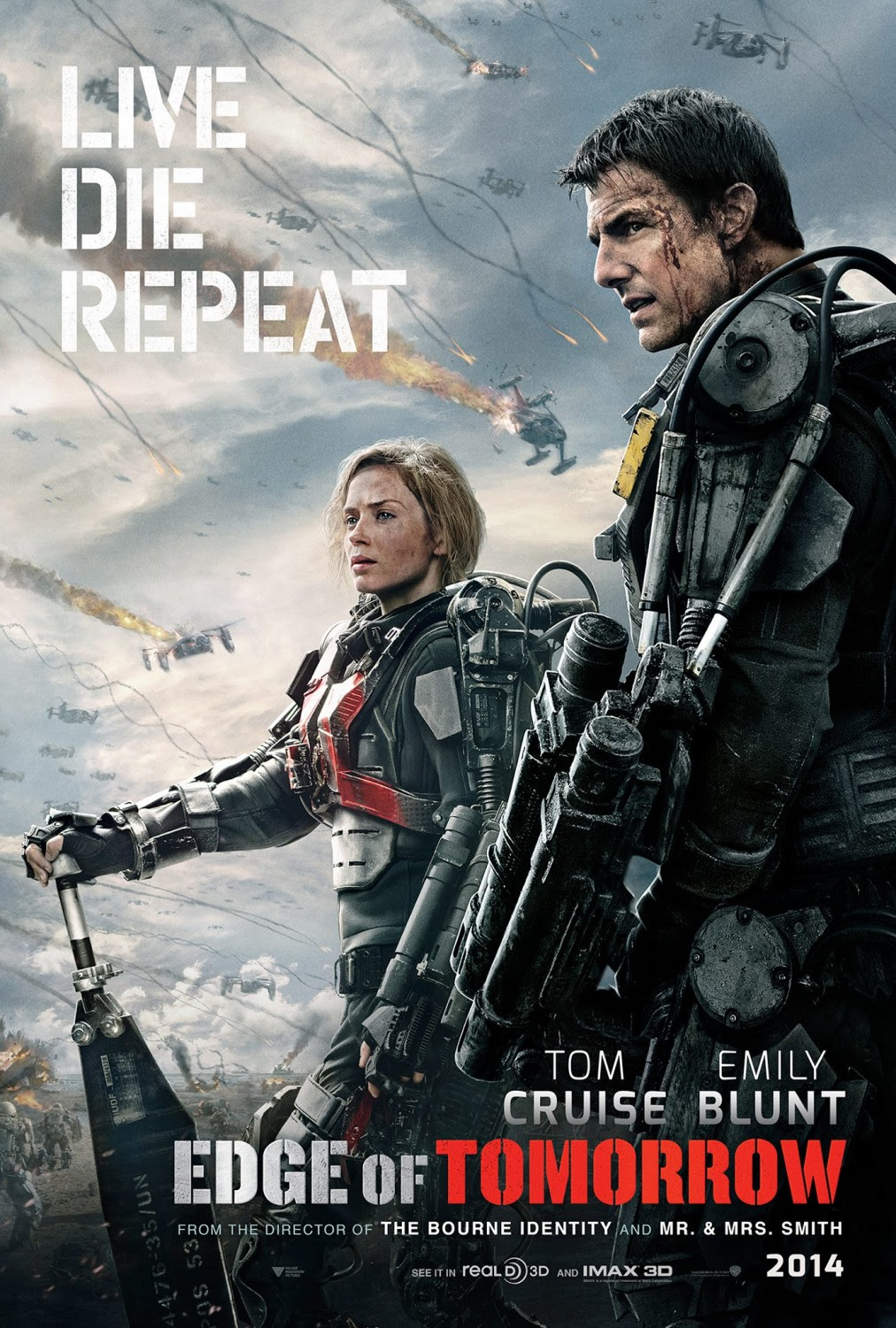 Edge of Tomorrow is like Groundhog Day if the reporter were shoved into the frontlines of a war with aliens instead of a lame local holiday ceremony. And, Phil has to die every day for the time loop to reset. It’s main female—

(And, almost only... there is at least two other women with speaking roles, but none of them interact, so Edge of Tomorrow does not pass the Bechdel Test anymore than Groundhog Day does.)

—is even named Rita.

Edge of Tomorrow is not the only movie I saw today. I also went with my daughter to see The Fault in Our Stars. So, today’s entry will actually be a bit of a mixed review of both of these movies in terms of how they relate to me and to Groundhog Day.

For example, Edge of Tomorrow shares a lot structurally with Groundhog Day, except for the act breakdown as linked to the time loop. I imagine SPOILERS will abound from here on out. If you would like to see Edge of Tomorrow, do not read on until you have seen it. SPOILERS for The Fault in Our Stars, on the other hand, probably won’t detract much from one’s viewing of the film. I had a basic idea of how the movie would end and it still worked pretty well...

Anyway, Edge of Tomorrow has a lot of action, obviously, but makes for a fairly smart film. It explains the time loop explicitly—tying it to a rather clever (I thought) alien race design. It’s got the usual time loop requirements. The initial loop marker, for example, is a bus driving by with Emily Blunt’s (Rita’s) face on it, with the graffiti Full Metal Bitch, and a guy kicking the bags Tom Cruise is sleeping on to wake him up. The “god day” stuff is not isolated to one particular day, but rather runs throughout. It’s got the depressed stage... but no hedonistic stage, mostly because it’s a war movie... actually there is one day in which Cruise’s character—I’m avoiding his name because I’ll get to it in a moment—does leave the war effort; he goes to a bar for a drink...

Actually, that scene brings me to one of my only complaints about the movie. And, this one is only a thing because Cinema Sins pointed it out recently—for no reason but that it is, apparently, a thing, we get Tom Cruise on a motorcycle.

I didn’t say it was a major complaint.

My other complaint is Tom Cruise’s character has a... well, a silly name, a little trite, a little obvious. His name in Edge of Tomorrow is William Cage. Though he introduces himself as Bill, my impulse was to think of his name as Will Cage, which seems annoyingly symbolic—given his situation with the alien-induced time loop, he has no choice but to act toward the end of defeating the aliens... his will is effectively caged, see. Of course, Tom Cruise characters often have silly names. Will Cage in Edge of Tomorrow, Jack Archer in Oblivion, Ethan Hunt in the Mission: Impossible films, Jack Reacher in, well, Jack Reacher, David Aames (which I assume sounds like aims) in Vanilla Sky—

(Why have I still not seen that movie? I know I was waiting for a while to watch Obre Los Ojos first, but why have I not gotten around to either in all these years?)

—Cole Trickle in Days of Thunder... they all just sound so made up. Phil Connors, on the other hand—

see, I said I’d tie this to Groundhog Day

—that is a name that, aside from the obvious link to Punxsutawney Phil, doesn’t seem made up to me. Of course, Tom Cruise seems like a made up name to me. Before you jump in, yes, I realize his last name at birth was Mapother, not Cruise (his middle name, apparently).

Edge of Tomorrow works surprisingly well. Sure, it’s directed by Doug Liman, so I should have assumed it wouldn’t be too shallow an action flick. But, I wasn’t sure going in. It plays well with the time loop conceit, offers up some good set pieces, and works with male and female leads without (too explicitly) having them get together. The third act is slightly generic, but overall, as I already said, it’s fairly smart for an action-oriented story. 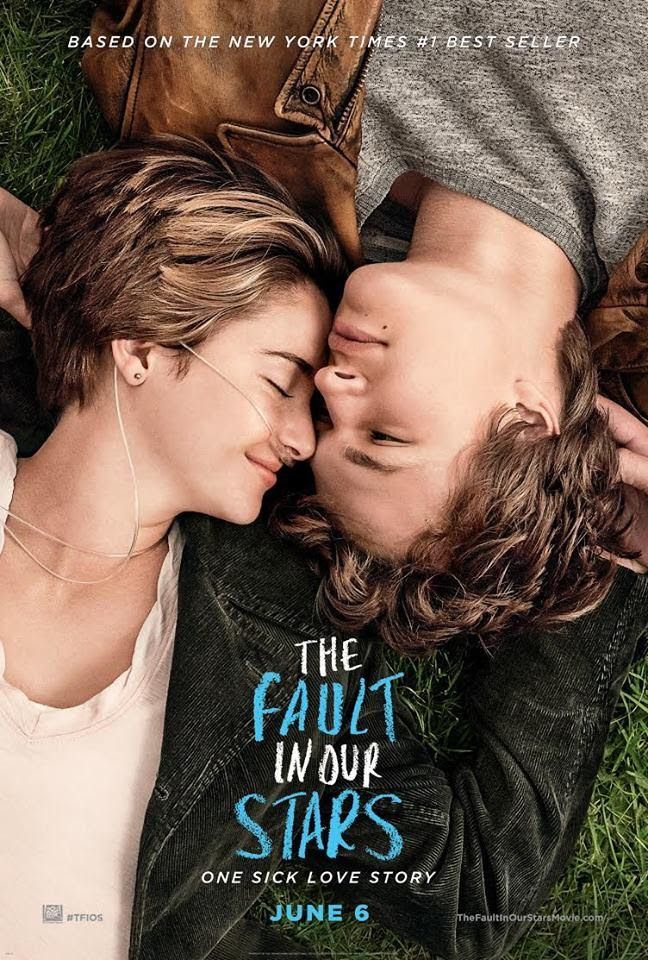 The Fault in Our Stars, on the other hand, has some fundamental flaws in what is is but executes itself very well. The story is a relatively generic one, the theme—as my daughter put it just a few minutes ago, it’s not about dying but about living—is simplistic, it’s geared toward teenage girls (some of whom cry far too loudly in the theater), and you know going in someone is going to die, but it still works. The characters play a little too shallowly, but the acting lifts it up just enough that, if you know what theater you’ve just walked into, you will... I almost said “enjoy” but that is not the word for a sad movie, I suppose. You will appreciate it for what it is.

What was interesting to me was that so much of the trite stuff they were saying in the movie was the kind of stuff I have said in this very blog. For example: Day 52: if you only had one day to live. I often end up going for the cheesy stuff about how awesome life is, despite its darker moments, or rant about the lessons to be found in Groundhog Day about living for today. And, as far as elements that the movie doesn’t necessarily comment on, I find it interesting (but also a bit on-the-nose) that Shailene Woodley’s Hazel Grace is not really dying. Sure she’s got cancer, and she’s stuck with that oxygen tank all the time, but really, she is no more dying than her parents are. As she points out early in the film—and, for the record, I have read none of the book—we are all going to die eventually. Despite her cancer, she fits right in with that eventually. Her life is painful, but then, so is everyone’s.

See, that last line there—that is exactly the kind of thing I might say in a Groundhog Day Project blog entry. All of our lives are painful, all of our lives are complicated, but as long as we learn to live for the moment (meaningfully, as opposed to hedonistically), we’ll do okay.

Today’s reason to repeat a day forever: to construct a particularly meaningful novel (or figure out how to market the ones I have already written) about, you know, life.