I didn't write about the ending to Ginger Snaps 2: Unleashed the other day mostly because I just did not care for the film, and I think I posted what can best be termed a non-entry about that film before I'd even gotten to the very end. And, maybe that is a good thing because I might have had a rant in me about how the sequel did far worse than just diminish Brigitte as a character and neglect pretty much all of the metaphor and meaning vital to the original; additionally, by shutting Brigitte up in the basement, leaving her to be a werewolf trapped by Ghost (who apparently fantasizes about using her against her enemies), Brigitte becomes victim to not only the infection from her sister, not only to the attack from the new werewolf or the men at the rehab facility, but also to Ghost and to the filmmakers and the film itself. What should have been, and could have been a continuation of a story that embraced femininity even as it tackled the difficulties of adolescence for females and challenged the way the world deals with and has dealt with female sexuality, instead became a dead-end story that (perhaps) embraced a metaphor for how society treats women a bit too well, ultimately leaving us with one girl a delusional sociopath, the other trapped with the corpse of the man who wanted to claim her as his... but not trapped by that man or by society, no longer trapped in the hospital, but trapped by another female, her surrogate sister.

Which is maybe, in some twisted fashion, a brilliant treatise on how women are forced to compete with one another for the attention of men to even survive in a patriarchal world. Except, I don't know if the audience for Ginger Snaps needed that lesson. They (we) knew that lesson already. We wanted Brigitte to win. We wanted her story to matter. instead, Unleashed is like a sad afterword to the original instead of standing on its own...

Which makes me wary as I finally press play on Ginger Snaps Back: The Beginning after bypassing it for a few days. 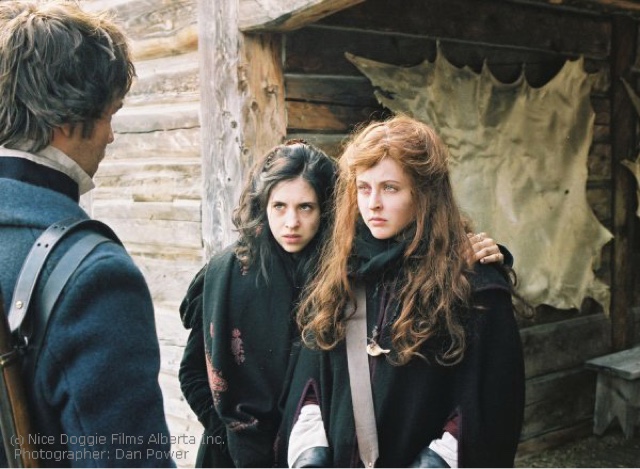 It's Ginger Snaps if it were set in the early 19th century instead of at the end of the 20th. (Which is an awesome concept for a sequel.) And, it is taking itself quite seriously right away, with some opening text to establish the setting, burning images to make the opening titles dramatic, plus voiceover. (Plus, in that Menstrual Monsters DVD extra, there was mention by... someone--I'm not checking again now, one of the directors maybe--about how the presence of the natives here in thsi third film paralleled the Otherness of the sisters.) I'm figuring on this being entirely awful or even better than the original. Unfortunately, the former seems most likely.

(Nitpick: Was anyone naming their daughter Ginger around 1800?)

Before watching the film, I was reading Meredith Borders' article at Birth. Movies. Death. entitled "What The GINGER SNAPS Sequels Get Totally Right And Entirely Wrong." (I just read her bit about Unleashed and the first paragraph about this film; I didn't want to SPOIL it.) Borders seems to have loved everything that I hated--and it was only as I read her piece that I realized I was anything more than indifferent about it--about the second film. She calls Unleashed "as unblinking as its predecessor in its embrace of feminine power and its rejection of societal rules." But, the second film puts Brigitte at the mercy of the werewolf curse, the rehab facility and the predatory men there, a brand new werewolf, and ultimately her new "sister" Ghost. It is not a film about feminine power. Nor, so far, does this third film seem like it might embrace feminine power. Barely arrived at the fort (after being saved by a man, which was after they were dragged along with their father on an expedition), Ginger is slapped by James (JR Bourne), and the fort's priest (Hugh Dillon) suggests that the sisters be put back out into the woods to fend for themselves.

Now, the conflict between James and the native Hunter (Nathaniel Arcand) has relegated the sisters to the sidelines. This is a story about men, it seems. I am not sure why the sisters are even a part of it at this point, just 20 minutes in.

Borders is right that the ending to Unleashed "undoes every thematic revelation of the previous eighty minutes - and the ninety minutes of Ginger Snaps before that." I just don't think the "thematic revelation[s]" in that second film were all that... well, revelatory.

Something Borders points out: "Until the final half hour of this film, Brigitte and Ginger are shuttled to the side of the conflict, spending much of the movie wandering around in a daze while the men of the fort take all of the action (often for ill rather than good." And, I have to wonder: is this sidelining deliberate commentary on how inconsequential female lives can be in a man's world? Or is this the accidental (or incidental) sidelining of characters that filmmakers lost faith in as able to carry a franchise? Or maybe there should have been no franchise. Borders, quite aptly suggests, "If this sounds like a feminist treatise against the history of female subjugation, that may be giving Ginger Snaps Back too much credit, as the movie - though well-paced and charmingly gory - has a fraction of the thematic depth boasted by its two predecessors." Since I was not so impressed by the "thematic depth" of the second of those, I guess I should be glad that, as Borders points out, "the surface [story here] is quite entertaining." It is blatantly not at all feminist, or female-empowering. Hell, Hunter just saved the sisters again.

And now, Ginger just kissed him.

Knowing what Ginger is becoming--this is the third film, after all--I kind of have to agree with the sentiment around the fort that the presence of these two young women is dangerous (there's room for a comparison between them and the leeches here) and the men would be better off without them. And, that is extremely problematic when this is supposedly a feminist trilogy--and the original fits that bill quite well. Strangely, the big issue with both Unleashed and this film, is that the monster is no longer feminine. There are no "menstrual monsters" except as afterthoughts--Ghost's turning against Brigitte comes too late (and Ghost is more child than woman) and Ginger's transformation here, even if she was bit at the end of the first act, is too slow a burn to matter when the werewolf remnants of the fort's trade venture are the ones attacking the place.

(And unfortunate sidenote: Emily Perkins doesn't have the emotional range to carry the character(s) of Brigitte over three films. Her few expressions worked well for the goth girl turned werewolf expert in the original. They almost worked for the "drug addict" of Unleashed... almost. But here, she needs something more than her open-mouthed puzzlement and wide-eyed stare.)

Hunter gives special knife to Brigitte to kill Ginger and tells her she has no choice. Two things: 1) by the usual werewolf lore, doesn't he have a bigger investment in killing Ginger since he was apparently wounded by her and should also be changing? 2) must we remove Brigitte's agency even more? Sure, ginger comes for Brigitte--which seems very proactive of her, but maybe if she can control what she does so much, she should have, you know, not killed the Seer and not left Brigitte to be taken back to the fort in the first place.