not a story. it's the god's honest truth

In my Oral Communication class, there's this bit in the book about how we use narratives to communicate. It's not that important to the overall curriculum, isn't on the final, but it makes for a fun lesson for the class. I ask for a story that everyone knows. We usually end up with a few fairy tale kind of stories--Cinderella, Snow White, Little Red Riding Hood... the latter works the best. With a little guided interrogation, I get my class as a whole to figure out together what sort of metaphors might be in the story. Neil Jordan's The Company of Wolves is a great elaboration on what eight classes have now come up with. Short version: it's all about sex and what a proper girl should do. Long version... well, read on.

Movie starts with Rosaleen (Sarah Patterson) asleep, supposedly with a stomach ache, and it seems like an occasion is coming--she's got a new dress hanging in her room and her older sister has just arrived. (I think it's her sister's wedding that's coming, but I'm not sure the film is explicit about it). Rosaleen sleeps fitfully. And, we enter a dreamlike setup, her sister running through a maze of old toys covered in cobwebs or infested with rats. Then, she--Alice, Rosaleen's sister (Georgia Stowe)--is chased through the woods by wolves and is killed.

And, we're no longer in the modern world. This is the surreal transition into the reality that will occupy most of the film. Rosaleen's father (David Warner) is now a priest (at Alice's funeral). (To be fair, he could have been before, but his robes here make it obvious.) Rosaleen is in the care of her Granny (Angela Lansbury).

Granny, of course, warns: "Never stray from the path, never eat a windfall apple, and never trust a man whose eyebrows meet."

(Sounds a bit (potentially) racist on that last one.)

She also warns Rosaleen about wolves that are "hairy on the inside."

Sixteen minutes in, Granny tells a story and we're another level removed from reality. Nice. Forgot about this bit. Story is about a groom (whose eyebrows meet) called away by nature on his wedding night. Bride (Kathryn Pogson) remarries, has some kids, groom (stephen Rea) returns, gets angry that his wife had some kids without him, tears his own skin off and turns into a wolf. New husband (Jim Carter) arrives, chops his head off and it lands in a bucket of milk. And, new husband has the audacity to slap the wife. Story ends and Rosaleen insists she would never let a man strike her.

While Grannt and Rosaleen sleep, a fur--a mink stole?--moves around in the spot where it's hanging on the wall... And there are a lot of random frogs in this movie.

Thirty-four minutes in, the movie actually reminds us of the sleeping Rosaleen framing story. Then, back to the dreamworld as Rosaleen spies her parents having sex.

Granny's second story is about a young man who meets the devil (Terence Stamp) in the woods. Devil gives him a potion and it adds hair to his chest then gets him attacked by vines.

Meanwhile, Granny finishes a red shawl (with hood) for Rosaleen.

And Rosaleen goes walking in the woods with... I guess his character has no name--Amorous Boy (Shane Johnstone), and she climbs a tree to get away from him. We see our second (I think) shot of a snake in a tree, an obvious biblical reference. She finds a nest with a mirror in it, and fixes her lipstick... 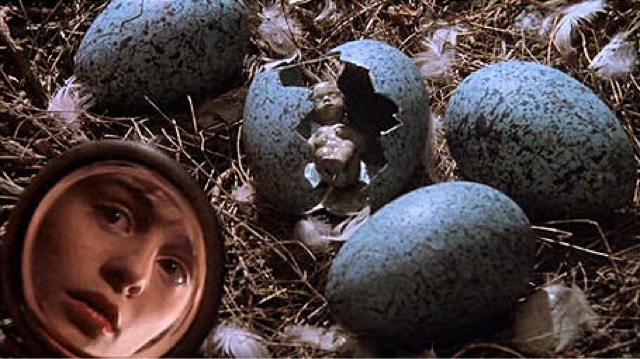 Rosaleen tells her mother (Tusse Silberg) a story... a woman (Dawn Archibald) "done a terrible wrong"--she's pregnant--by a nobleman (Richard Norant) interrupts his wedding and curses everyone there (not the servants) to become wolves.

This movie is all about stories, about how we (or rather society) tell(s) stories to understand the way things are and the way things should be. As Roger Ebert puts it, The Company of Wolves "is a disturbing and stylish attempt to collect some of the nightmares that lie beneath the surface of 'Little Red Riding Hood.'" The third act here is the "Little Red Riding Hood" story--Rosaleen takes food to Granny and meets a man (Micha Bergese) whose eyebrows meet in the woods. (That is, she meets him in the woods, and his eyebrows meet each other. Not that his eyebrows meet in the woods.) But, not before she's got a Crocodile Dundee moment with Amorous Boy. He offers to go with her into the woods to keep her safe, shows her his knife, and she pulls out a bigger knife.

The story thing, though... There is a thin (but oh, so powerful) line between stories about what we expect from girls and stories that suggest that girls should forego what we expect and do their own thing. Ginger Snaps leans to the latter, while Ginger Snaps Back leans to the former. The Company of Wolves, with its dream imagery, invokes plenty of different variations on the idea that men are dangerous and young girls ought to be careful... which is a message fraught with danger. It's the usual line that leads to victim shaming in cases of rape, that leads to male politicians making decisions about female reproduction, that leads to women being blamed when engaged in immoral behaviour but the men with which they commit such behaviour are let off the hook because boys will be boys and men will be men. Patriarchal nonsense that stands the test of time because men rule the world.

What is this movie about? Like Ginger Snaps would be years later, it's about a girls' passage into... well, being a sexual being. The girl is not the wolf, here, though. Not until the very end of the film, and then only in the dream that makes up most of its content. Men are wolves. Girls need to be protected from them. Ultimately, in the framing story's reality, Rosaleen is not even awake and the wolves break through to her level of reality. Like some Freudian nightmare about what's going to happen to this adolescent girl--men lining up at the door, her childish toys left falling to the floor.