the real obscenity black folks livin' with every day

Got Star Wars out of my system... at least until I can get one of my kids to go see it so I have an excuse to go see it again. Now, back to our irregularly scheduled blog about a political movie. (If you're somehow here because of yesterday's Star Wars SPOILERS post, you should know that this month I have been trying to alternate between political films and fantasy films (though the definition of both of those things has gotten a little blurry). Anyway, the other day I watched Bulworth--a movie I have liked since I first saw it in the theater but which always bugs me in some of its particulars. One of those particulars was really getting to me after watching it again this past week, and I want to get back to it now. 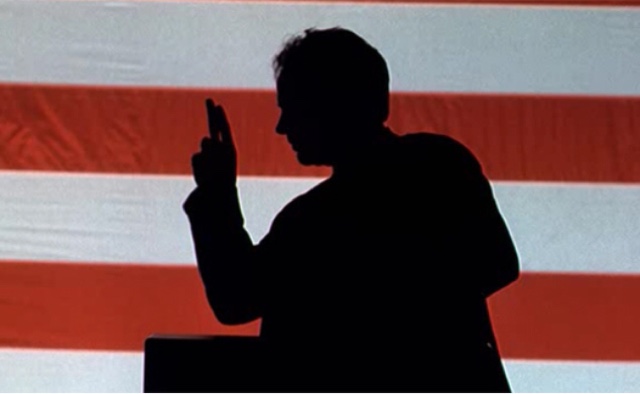 See, the good thing about this film is that it offers a politician so broken by the system of which he is a part that he a) doesn't want to live anymore and b) doesn't want to lie anymore... to the point of volunteering some very offensive notions to make points that we're supposed to understand as truth. And, that's amusing, sure. And plenty of it rings with a bit of truth. But, coming from the mouth of an old white man, a politician no less, there's a bitter aftertaste to a lot of it. As I pointed out before, on the level of the film's reality Bulworth steals the words of two African Americans (Halle Berry's Nina and Don Cheadle's LD), which is almost forgiveable since their words are coming from the pen of Bulworth himself (Warren Beatty) and white cowriter Jeremy Pikser. Almost. But, Nina and LD (not to mention Rastaman (Amiri Baraka)) serve at the same time as inspiration and inspired. LD, after a couple interactions with Bulworth, including Bulworth buying ice cream for all of LD's child dealers (and defending one of them against some pushy cops), and seeing Bulworth giving his big rap monologue on TV, seems to be quitting being a drug dealer altogether. It takes the white guy to inspire him to do something more positive with his power. Nina, on the other hand, is a hired killer who chooses not to kill Bulworth initially because she connects with him, or he with her; seriously, by the time Bulworth actually explains to her that he hired someone to kill him and then had been trying desperately to call it off, it is pretty clear that she has already decided not to kill him.

Then, there's the Rastaman. I've written about the "magic negro" character before in this blog, and Nina (and her girlfriends) and LD are pretty damn close. Rastaman, aka Rastaman the Griot (a traveling poet, as it were), though I've seen him called a one-man Greek chorus, absolutely is more the magic negro. He has no real power to make Bulworth do anything, of course, but he shows up repeatedly to tell Bulworth that he can't be a "ghost" but rather needs to be a "spirit." Being a spirit apparently involves chasing after a girl roughly half his age and appropriating rap and hip hop rhythms for his speeches, because, as Roger Ebert aptly puts it, "the movie presents black culture as automatically more authentic and truthful than white." I argued the other day that this comparison is a little unfair because the film doesn't deal in white culture, per se, but politics (embodied in a white senator) versus urban (read: black) culture. Still, however unfair, there is truth to it in the sense that the film, or at least its main character, believes that foregoing the formal structures of political speech for something more... again, urban, means foregoing the institutionalized lies of government for something honest. But, a more honest approach would have been to let the black voices speak for themselves... Instead, Bulworth (and by extension, Warren Beatty) becomes something like Paulo Friere's notion of the "sub-oppressor." Taking on the weakness of the oppressed, on the behalf of the oppressed, but in stealing their words, he has diminished their power all over again, co-opted it for himself. By portraying himself as the white saviour, he just reinforces the idea that the black community needs saving. At a certain point in this process, it stops mattering how much or how little their need of saving might be true, and it simply becomes a story, once again, of the white man saving the dark man.

Complex magazine listed Bulworth as #9 on it's list of "The 50 Most Racist Movies," calling it "[t]he most embarrassing and racially insensitive two hours ever committed to celluloid." Game Delahaye at Stereogum included the film in his "Hunt for the Worst Movie of All Time." And Delahaye sums it up pretty nicely:

Anyway, of course Bulworth's horrible rapping and delirious spouting off about horrendous ethnic stereotypes makes him win the election in a landslide, and now he is a powerful leader to the African American population who makes drug dealers want to stop selling drugs and start putting their energies into repairing their communities, because that's how that works.

Gotta love the sarcasm at the end, there. And, I would pile right on top of it because it makes perfect sense that a drug dealer of course could only be a drug dealer because he wants his community to fall apart. Dealing drugs could never have been the best possible option for someone living in a bad neighborhood. At least drug dealers are honest when they are going to fuck you--as LD is early in the film, promising to kill Nina's brother when catches up to him--while politicians will just tell you what you want to hear. And, that has nothing to do with race. The idea that politicians are liars and criminals are honest isn't even particularly novel. But, in America where race relations and politics have invariably put white men like Bulworth on top and black men like LD and black women like Nina on the bottom, it is bordering on irresponsible to co-opt coloured voices into white ones.

If Warren Beatty had still been a big enough box office draw that his presence would garner far more attention than, say, a movie made by an African American filmmaker, that would be one thing. This movie opened on just two screens. To be fair, it was apparently #1 per screen for the weekend, but with only two screens, it just couldn't get enough eyes on the screen. It made $141,816 it's opening weekend, while Deep Impact was #1 in its second weekend with more than $23 million. A week later, it expanded to over 2000 screens, making $10.5 million (only $5000 per screen), then it dropped to #5 the next week, #7 the next weekend, then #11, then it disappears from Box Office Mojo's records. In total, it made $26.5 million domestic. It was #72 for the year, which isn't awful. But, Beatty's Communist-friendly Reds, a slow-paced, 3-hour-plus drama, made $40 million seventeen years earlier (during the Cold War, mind you).

Ebert says Bulworth "seems to reflect a rising tide of discontent with current American political discourse." I'm not sure the tide is rising so much as constant, and when the competition was an asteroid coming at the Earth or a giant lizard terrorizing New York, this little tale of a white man speaking up for the poor black man just couldn't amount to much. And, with each viewing the scales change a bit, the entertainment value not standing up as much to the inherent racism. It starts to play like some twisted fantasy where Warren Beatty realized he was no longer cool so he cast himself, essentially, as a black man who hooks up with Halle Berry. It's still funny, but I'm not so sure anymore that it's any good.