the same eyes in different people

More Star Wars, more SPOILERS. Not that I will make a particular effort to SPOIL things this time, but since I do not deal in straight reviews in this blog, it is inevitable that I will bring up details of Star Wars: The Force Awakens that are SPOILERS. Proceed with caution. 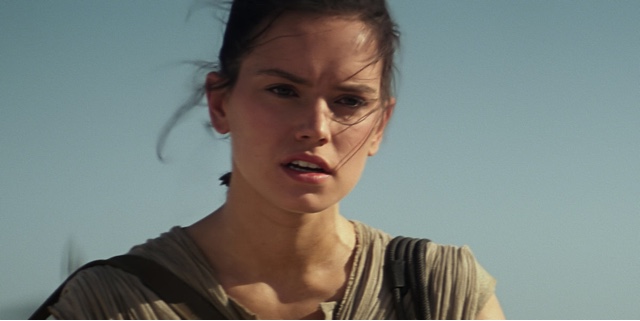 I was going to write today about how it is okay that The Force Awakens echoes plot points from the original trilogy because there are only so many available plotlines anyway, and as Maz Kanata (Lupita Nyong'o) describes it, the fight going on in the present is the only fight, the same fight that keeps happening in different guises. Whether it is the Sith or the Knights of Ren or some megalomaniacal dictator who isn't even force sensitive--Domhnall Gleeson evokes a good Hitlerian vibe in his General Hux, and it really a different type of villain than Star Wars has had before. We can assume that Palpatine made some big speeches like Hux's but we've never been shown those things. Palpatine manipulated his way into power and then ruled by force. Hux seems to actually be ruling by inspiration. However "evil" that inspiration may be, it is still inspiration.

(It's actually too bad that no one in Star Wars outside of--as far as I recall--the Thrawn trilogy ever comments on the inherent racism of the Empire. Grand Admiral Thrawn, a blue-skinned Schiss, is a rarity; no non-humans rise to power within the Empire. The First Order, by all appearances, is following suit. The closest anyone involved with the First Order comes to not looking human is the scarred, and clearly humanoid if not human, Supreme Leader Snoke. The Republic crowd that we see involves more than just humans, as does the Resistance, and of course there's Chewbacca.

(Some of the paranoid Americans these days cheering on the likes of Donald Trump and fearing every Muslim or Arab or anyone with dark skin at all, should take a cue from Star Wars.)

But, that is not even what I want to talk about today. See, after I got home from the movie, a couple things popped up on my radar online. One, my friend Holland posted an article about how Star Wars: The Force Awakens passes the Bechdel Test "with flying colours." I argued a) against it because the film barely passes the third standard for the Bechdel Test (the female characters talking to each other about something other than a man); it does pass, but barely. I suggested the bit from the Mako Mori Test be used as well as a fourth standard--i.e. the female in question, Rey (Daisy Ridley), has her own story, her own goals separate from the male characters. (Her story here is triggered by the arrival of a non-gendered droid and then Finn (John Boyega), but she takes control of that story. She saves BB-8 because she cares about others, even droids. She doesn't need rescuing by Finn and even looks perplexed (or maybe a little miffed) when he asks her if she is okay after they are both knocked down by an explosion. The Mako Mori Test requires that Rey's story arc not support a man's story. While we meet Finn first, he ultimately serves to support Rey's story.

But, there's a bigger problem than just deciding the film isn't sexist because it passes these tests.

(If you're reading this despite the SPOILERS, I will warn you again that some big ones are coming.)

The audience is still inherently sexist.

But, Rey is the Mary Sue. That's the line.

It doesn't take much presumption to figure out why the audience might think she's a Mary Sue but neither Luke nor Anakin is a Gary Stu. themarysue.com concludes, "If we're calling Rey a Mary Sue, there's nothing wrong with that--as long as we're also willing to call Luke Skywalker one too." And, on the one hand, I am okay with that. On the other hand, in a universe where there are force sensitive individuals, are we going to focus stories on the everyday people or these awesome people who will have great adventures, be great at doing things, and save good people and destroy bad people (or vice versa)? On a third hand, taking this unfortunately gendered term--even male characters are more likely to be called a Mary Sue than a Gary Stu--and using it pejoratively to diminish Rey's role is wrong. Almost as bad as the people who argue that she's just a male character with female parts painted on as it were, because she is not, and does nothing, feminine. But this binary--males are the ones doing while the females... What? Sit around and gossip? This binary is innately flawed and offensive. And, even if you buy into this binary, I would argue that Rey's rescuing of BB-8 is inherently feminine, then. 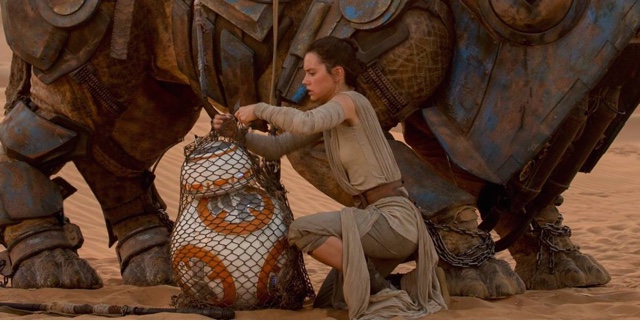 If the masculine thing is to get into the violent fights and, you know, beat the bad guy, then we can at least call saving a helpless droid a feminine act. Under this binary, the men are probably too busy drinking and bragging about all the bad guys they just killed.

Or maybe we can reject the binary altogether, and allow for the possibility that the hero of a story can be feminine and powerful, can be skilled and still remain female.

And, maybe we can admit as well that we like stories about people who are good at what they do, regardless of gender.