i have a bad feeling about this

Today might not make any sense. Or it might involve insights into filmic structure and the visual tendencies of cinema... especially within the Star Wars films. See, I’m going to watch a video built from all six previous Star Wars films playing at the same time. (I was going to link to it, but to copies have been taken down from YouTube and the site where I’m watching it now might just lose it also. (Oh, just in case.) There is another version that has (present tense—that one has not been taken down) them laying over the top of one another, but it is hard to really look at that one for too long. I tested this one out a few days ago to make sure it wouldn’t be utter chaos.

Positive thought: without the ability to make out a lot of Lucas’ cheesy dialogue, maybe this will make some of this more awesome.

(I’ll keep it simple—The Phantom Menace is ONE, Attack of the Clones is TWO, and so on.)

THREE gets away from the black of space first, since the extended battle there is taking place over Coruscant. TWO, FOUR, FIVE and SIX brings ships and planets into view at different rates. ONE has us in the ship with Qui-Gon and Obi-Wan. The obvious outliers here are ONE and SIX, as the others get right into action... Well, FIVE only barely, as Luke is out on his tauntaun. ONE is boring, though, right away. Business meeting when there are lasers firing on other screens. He’ll THREE is still in that opening battle and everything else has moved on.

It is rare that dialogue is clear here. C-3PO saying “this is madness,” Obi-Wan saying something about the “controls,” and now Darth Vader saying “I want them alive.” Mostly the Sound Effects are too loud for the words... And I’m not sure that is a bad thing.

This multi-part action sequence in THREE is almost laughably long next to these other movies that have moved on to conversation and whatnot.

C-3PO’s “over here” in FOUR was nicely timed with Luke wandering on Hoth in FIVE.

The opening battle sequence in THREE finally ends and there is a brief lull in the action. Then, battle droids show up in ONE, the rancor shows up in SIX and the Battle of Hoth gets started... And I Rather like how it allows for setup, showing the pilots getting in their ships, giving them faces, instead of just being background for a glorified video game like that opening in THREE.

AT-ATs and rancor approaching at the same time, but Luke takes down the rancor quickly.

Action sequences distract from the walking and talking bits, and from Jar Jar. He’s just noise.

FIVE and SIX get us back into space about the same time.

Near-simultaneous wipe to space from TWO and FOUR.

These coincidences are not all that exciting, though. I mean, Yoda’s going to die in SIX before he shows up in FIVE but that doesn’t really mean anything, not even for Lucas’ “rhyming” idea. It’s just coincidence. What I’m really waiting for is that moment when R2-D2 is on all six screens at once. It has to happen. This is his story. That Chewbacca first shows up in FOUR and Kashyyyk is first seen in THREE about the same time is... interesting, but not exciting. I want to see Obi-Wan force push someone in THREE and someone gets knocked down in FOUR or something cool like that. There were some well-timed sparks (not quite explosions) between FIVE and SIX earlier, but...

I want more from a crazy experiment.

Like, as Leia and Han kiss in FOUR, Jango and Obi-Wan were framed really close together in TWO and I wanted them to break with the script and just kiss already.

Even without sound, Jake Lloyd has horrible line readings, and Pernilla August, who plays his mother, is acting the crap out of her scenes. She should have given everyone lessons in how to ignore George Lucas’ direction.

Luke meets Leia in FOUR just as he’s explaining to her (vaguely) that they are brother and sister in SIX.

Nice shot timing—aerial shot of the Jedi temple in ONE while in THREE we get an aerial shot—almost the same angle—of it burning. 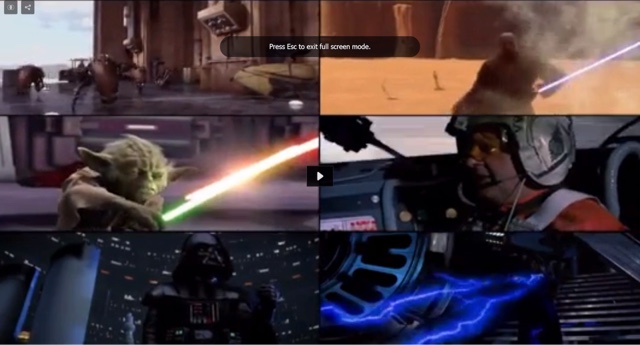 Ultimately, somewhat entertaining but not very insightful. No obvious structural matchups, even.