Sometimes, I just can't mince words. The Big Short made me angry. Not because it was a bad film. Far from it, in fact. The ensemble is great, Steve Carell giving the best performance probably, Christian Bale a close second (though Brad Pitt has the best moment in the film). The film makes use of clever voiceover--take note, Danny Rubin--and deliberately bazaar (and out of context) celebrity cameos to explain confusing investment terminology. And, it does a great job of mixing some documentary-style montages to offer up context as to the timeline of events. It tells the story of Inside Job in a simpler fashion, and expands Margin Call's story into a larger setting. If you don't know either of those films, the former is a documentary, the latter a scripted film, and both are about the financial crisis of 2008. The Big Short begins a few years earlier, when Michael Burry (Bale) basically creates the "credit default swap" and banks let him buy a whole lot of them because no one has ever bet against the housing market before. As the film goes on, various traders buy into the credit default swap thing and gradually realize that to win here the economy has to collapse. Pitt's great moment involves him telling the two rookie traders he has been helping along not to dance in celebration at the profit they've made because people have just lost homes. It's a sobering moment for them, and at once amusing and sobering for the audience. A lot of the movie is like that--insert a humorous detail then turn it into a horrifying detail. It also goes for the emotional beats--like a man who learns that his landlord, who is still collecting his rent, is probably defaulting on his own loan on the property... And then toward the end of the film, we see that same man living out of his car with his wife and kids. And, I'm not the biggest fan of consumer capitalism going into a film like this. Imagine me along the way, or coming out after the end credits. I mean, we all got over the recession and moved on.... No, some of us got over it. Some of us lost our jobs or our homes or our lives. Some of have not fully recovered. Some of us are falling for the same bullshit as before. The last bit of "real-life" text before the credits roll lets us know that just this year a new thing called a "bespoke tranche opportunity" is available... Which is another name for a CDO... a Collateralized Debt Obligation, which, as Selena Gomez explains in the film, is basically a bet on another bet on another bet and exactly the kind of financial bullshit that separates we normal people from the insanity of the stock market and Wall Street and banks and what have you. My thing is not that I don't understand this kind of financial trading of imaginary things to make billions, but that I don't get it, if you can comprehend the difference. I mean, the basics of the whole employer-employee relationship is that employer pays the employee less than he hopes to make off of the work, thus making a profit. I get that, but at a certain point, the drive for profit overtakes something like... decency. The big realization that the market for all of this "insurance" on mortgages and loans, and the bets on that insurance is 20 times larger than the mortgage and loan market itself is devastating to Carell's character and damning to modern capitalism and the whole idea of Wall Street. And, there's a bit in the film about how in a few years (i.e. today) we'll be doing the same shit, acting like there was never any problem with sub-prime loans, and we'll blame foreigners and outsiders for all of our problems, and, you know, big shocker, we love to blame immigrants and foreigners for everything. America loves a scapegoat as much as it loves to make money as much as it loves guns as much as it loves freedom and beer and racism and violence. As Pitt's character says, his least favorite part of the whole investment market is that people become numbers. That sort of thinking gets us right into the realm of institutional violence and scapegoating and the dehumanization of, well, ultimately everybody. And, it pisses me off. Hell, this week, I've watched Trumbo, about paranoia destroying lives, Spotlight, about institutional self-preservation destroys lives and protects the guilty, and now The Big Short, about capitalism destroying lives and making rich people richer... and true stories are bringing me down, in a way, but also making my want to speak out more than usual. As Aaron Burr says in Hamilton, "I am the one thing in life I can control. I am inimitable. I am an original." It's obvious, and trite, but right now, what I want is to keep talking, keep speaking out. This week, I will put in some work on my master's thesis, this week I will keep blogging (and ranting), this week I will keep talking. It's time to speak out. 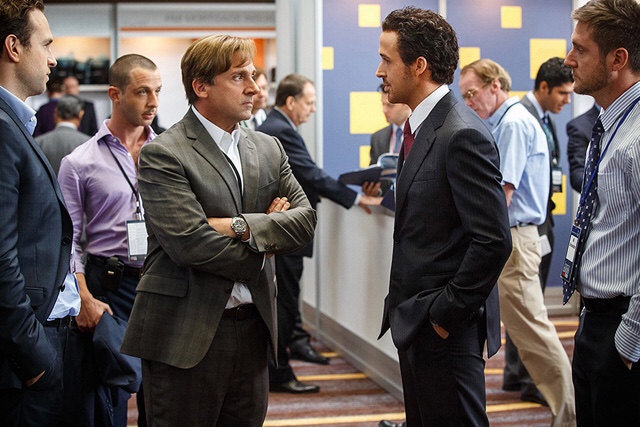