Phil Connors is not a werewolf. Let’s just get that obviousness out of the way. He is, however, quite a bit the adolescent, going through some changes that are, if not physical, quite significant nonetheless. 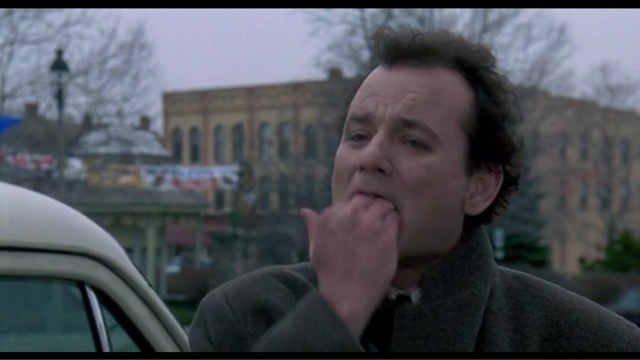 (By the way, the last recap post here was Day 792 - time for the big bachelor auction.)

I think I started referring to Phil’s hedonistic ventures in act two of Groundhog Day as his “adolescent” phase after Harold Ramis described it that way in his commentary track. But, it’s more than just good shorthand.

(After that last recap, I drifted into horror films for October... like so:

And that was a good month for me. Horror films... I don’t know if their my favorite kind of movie, necessarily, but I have a special space in my cinema-loving heart for them. Have had since I was a kid.)

Like the werewolf movies in this blog of late, it’s a good metaphor-Phil’s situation, that is, for the whole adolescent/puberty thing. Before he gets to Punxsutawney, Phil’s a child. Heading off to Punxsutawney is a chore he doesn’t want to do. Then, he gets there and he’s suddenly free of restrictions (or so he thinks), free of responsibilities (or so he thinks). So, he goes a little crazy, hits on strangers, dresses up in costumes just to go to movies...

(After that month of horror films, I wasn’t sure what to do next. Gradually, I happened into characters who didn’t necessarily know what to do, either. But, they all probably thought they did.)

In fact, I would hypothesize now that in the scene at the Alpine Theater (that just happened as the movie’s running tonight), when he starts to ask for one adult ticket and one child ticket, it is not Laraine he is designating as the child in this equation. He is the child. She is the adult. He’s kind of like Josh (Tom Hanks) in Big, an adolescent boy in the body of an adult. Rita is his Susan (Elizabeth Perkins)—the woman that makes him realize he wants to grow up.

(November involved a lot of teenage characters. It also got me back in the 1980s, and, while that’s not a genre, 80s films also have a special place in that movie-loving heart of mine.

Anyway, after another viewing of Groundhog Day - 823 - the films went like this:

After jumping forward to a more recent teenager character—Katniss Everdeen—in the Hunger Games “trilogy” (835 842), I got—I guess you could say I was sidetracked, but it lasted 6 (836 837 838 839 840 841) days—sidetracked by Ex Machina with ties to long-time recurring Groundhog Day Project topics like gender and identity.

Then, a few more one-offs before I landed on werewolves... or more specifically, teenage werewolves (and I’m not done with them, so they will probably be back tomorrow). Those movies:

Tomorrow... werewolves, probably. Gonna give ‘em a few more days, then drift my way into a new theme for December. (And, it won’t be Christmas films.)