you can't do that. this is america

(Cross-posted between my daily Groundhog Day Project movie blog and my far-less-regularly updated Against the World political blog.)

The Naturalization, Alien Friends, Alien Enemies and Sedition Acts of 1798. Anti-German and anti-Irish sentiment in the mid-1800s (and beyond; is not the drunken Irishman still a staple of film?). More anti-German sentiment around the two World Wars. The Espionage Act of 1917 and the Sedition Act of 1918. Anti-Italian sentiment from the 1800s into the 1900s.

(For example, the largest mass lynching in US History was that of nine Italian-Americans who had been found not guilty of murder and let go in New Orleans, 1891. They and two other Italians held on unrelated charges were dragged from jail and lynched. Arrests followed, but not of those who did the lynching. Rather, more Italians. In a piece at cnn.com, 10 July 2012, Ed Falco describes how President Roosevelt called the lynchings "a rather good thing.")

Anti-Catholic sentiment just made things worse for the Italians.

Anti-Japanese sentiment and internment during World War II. Anti-Communist sentiment running throughout the 20th century. (Which is where today's film--Trumbo--puts us. (I have also just watched an episode of HBO's John Adams and the film version of 1776 is on as I'm writing.) But, let us not stop there just yet.) Anti-black, anti-Mexican, anti-gay... Anti-Muslim of late--that's just keeping up with the usual practice.

The American tradition of Otherization.

Dalton Trumbo and many others in Hollywood were blacklisted because they were (or were rumoured to be) Communists. There was no crime committed by Trumbo and the rest of the Hollywood Ten until they were subpoenaed to Congress and would not answer the questions put to them. 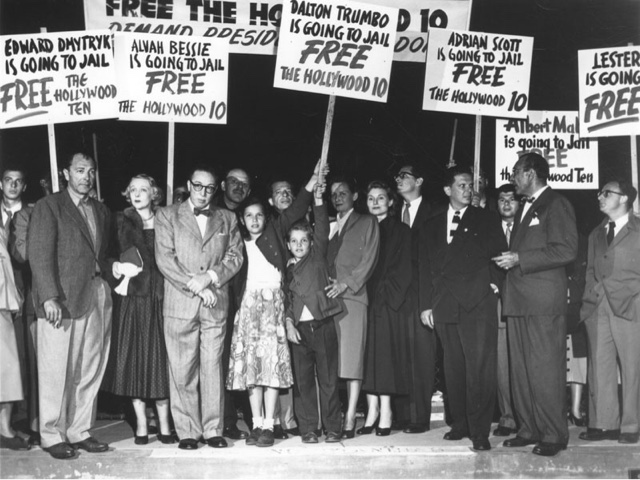 The film plays that testimony scene with both Trumbo (Bryan Cranston) and Arlen Hird (Louis C.K.) almost as comedy, despite the serious implications for these men's careers and also potential jailtime that may come from being in contempt of congress. 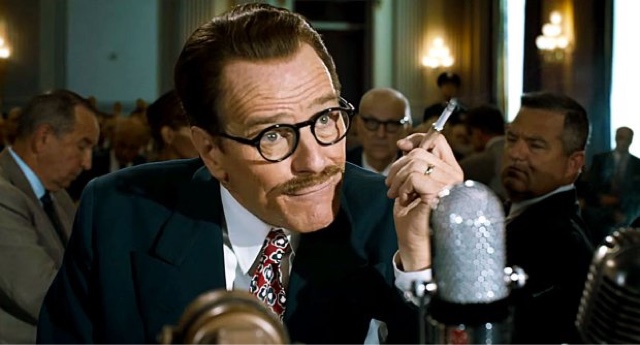 In fact, there is a lot of comedy... or at least comedic moments in Trumbo. The film also, necessarily takes a dark turn as Trumbo deals with being blacklisted by working even more, under assumed names, taking amphetamines and drinking and smoking (perhaps) more than before. Trumbo is a deeply flawed character, the kind of character I love. There's a moment in the film in which he will not even take a break for his daughter's birthday celebration and cake and his daughter and (nearly) his wife turns on him. The film does not shy away from his horribleness, but rather presents him as a flawed man desperate to survive in the face of adversity that has put him in jail and cost him his career (officially, but not completely as long as he is willing to remain anonymous). My pet subject--identity--comes into play, but only incidentally. But the related idea of voice is key to the story. These Communists are the Other, distrusted just for meeting together. There's a line repeated a couple times (including in a theatrical newsreel) about the conspiracy of these Communists to undermine our American way of life, or something along those lines. a) I don't have the movie handy at home 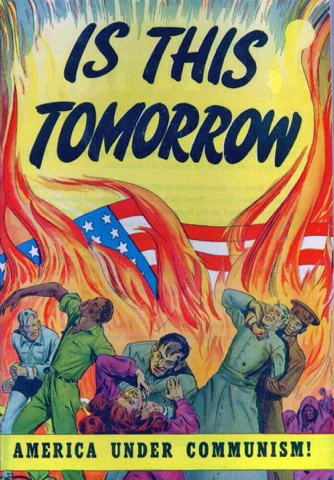 b) the exact wording is not the point because the same damn argument just keeps happening in this country. (To be fair, I would never suggest that America is exclusive in this behaviour. But, America's part in it is the one that is immediate and personal to me.) Rex Reed (who I should really cite more often than I do) ends his review of Trumbo with the hope that the film "will broaden the knowledge of young audiences today that remain ignorant about Hollywood's darkest past." The real hope, I would say, is that any audience--let alone a young one--might even go see the film. It's made about $4 million so far, and I think there were about 3 other people in the theater where I saw it today. It opened at 37th in the box office about a month ago. #1 that weekend was Spectre, #2 The Peanuts Movie. The Martian was still doing pretty well, too. (I was actually excited to see this movie but took a month to get around to seeing it, so...) It's not going well.

But, we cannot expect a film that questions the joy we take at Otherizing anyone with differing political views to do well. We prefer out entertainment patriotic, jingoistic. We don't like a film that presents us someone different who remains unapologetically different. (Some of us do, but generally speaking, not so much.) Even Rex Reed, who seems to like the film, calls Trumbo's joining of the Communist Party "naïveté."

When Trumbo eventually won an award from the Writer's Guild in 1970--a moment dramatized at the end of the film--he said, "The blacklist was a time of evil. Caught in a situation that had passed beyond the control of mere individuals, each person reacted as his nature, his needs, his convictions, and his particular circumstances compelled him to." In the film (and possibly in the actual speech, though I cannot find a complete transcript), he adds, "[N]o one on either side who survived it came through untouched by evil... none of us--left, right or center--emerged from that long nightmare without sin." I think of images from the civil rights movement and the violence put against it--the dogs, the hoses, the burning crosses and lynchings, and I can see the point of Trumbo's phrasing. I don't believe in "evil" but if there is such a thing, surely it is that which turns man against man to no real end.