stories about what happened

It would be difficult to talk about Star Wars: The Force Awakens without SPOILING certain elements of its story. There will be ample warning before I get to that.

PART I - ON NOSTALGIA AND A LIFE WITH STAR WARS

First, it must be said that Star Wars has been in my life pretty much from the beginning. While I do not specifically recall seeing the original--I was only a year old when it came out and am not actually sure when I first saw it--nor do I have specific memory of seeing The Empire Strikes Back for the first time, by the time Return of the Jedi came out, I was very familiar with the previous two, having watched them many times. And, I do remember going to the movie theater to see Return of the Jedi, I remember shopping at Toys R Us for action figures that year (I already had some), and when the Power of the Force line came out in 1985, I bought more. Through the 80s I watched all three films time and time again. I may have invented this but I remember one day home sick from school just settling in and watching all three in a row. Or maybe that was every time I was home sick. There was less Star Wars stuff to consume as I got a bit older, though things changed when I was in high school. Dark Empire and its sequels from the comic book store. The Thrawn trilogy at the regular book store. The Galaxy collectible cards (I had full sets and even spent a good amount of money on a set of the bonus cards). I also bought old stuff at the flea market--Splinter of the Mind's Eye, Brian Daley's Han Solo books and L. Neil Smith's Lando Calrissian books, A.C. Crispin's Han Solo books. I also bought old action figures, though they were just display items at this point. I read the Jedi Prince series, the Jedi Academy trilogy, Tales of the Jedi, Young Jedi Knights, Junior Jedi Knights, the Corellian trilogy, the Black Feet Criss trilogy... So many books for a while. Star Wars books and Stephen King novels got me through my first go at college. Then, the Special Editions of the original film trilogy came out in 1997 and I stopped keeping up with the books early in the New Jedi Order series, which started around the time The Phantom Menace came out in theaters...

Maybe it was The Phantom Menace that soured me on Star Wars. I mean, the nostalgia factor of this universe that had been with me all my life blinded me to the film's faults the first time I saw it. And the second time I saw it. And maybe the third. My relationship with Star Wars had gotten rocky but I guess I had some rose-coloured glasses. I could appreciate The Phantom Menace enough that I still looked forward to Attack of the Clones (even though, I did not care for that title at all when I first heard it), and by the time that one and Revenge of the Sith was in theaters, I had kids of my own, and things were... different. When my son took a particular interest after Episode III, I gave him my Star Wars books.

And, oddly, that brings me around to Episode VII. And, just saying that is a little SPOILERy. From here on in, THERE WILL BE SPOILERS.

Seriously, if you don't like SPOILERS--and you haven't seen The Force Awakens yet--you need to just click away. If you like SPOILERS, you should also probably click away because you and I can never be friends because you are a horrible person with no good appreciation for film or stories in general. 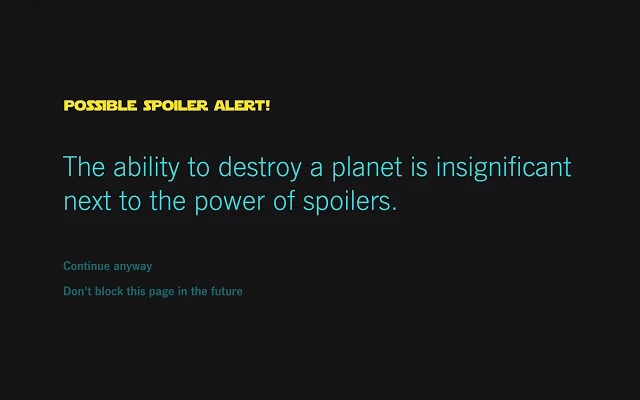 (That image is from Google's "Force Block" software, which should have kept anyone running it from even getting to this blog entry. But, I like it as my image for today, because its sentiment is a nice one--The ability to destroy a planet is insignificant next to the power of spoilers.)

PART II - ON PARENTING IN LIFE AND IN STAR WARS

Someone commented, on IMDb I think it was, about how it was strange seeing Han Solo become a "father figure." I don't think that I found it to be strange because Han Solo was always older than me, and he deserved to grow up just as I have. I didn't need a film adaptation of The Truce at Bakura--a novel set immediately after Return of the Jedi for those of you who never knew, or have blocked out the old canon. The Thrawn trilogy was a great story, but it was far more important to have Carrie Fisher as Leia, Mark Hamill as Luke and Harrison Ford as Han... And Peter Mayhew as Chewbacca and Anthony Daniels as C-3PO and Kenny Baker as R2-D2 (actually, he's credited as "R2-D2 consultant" in The Force Awakens, presumably because Artoo's role is so small that they just didn't need Baker inside the droid) and, though I didn't realize it, it's cool that Tim Rose is back as Admiral Ackbar and Mike Quinn is back as Nien Nunb.

Anywhere, where was I?

It was more important to have the original actors than keep an old story. Jacen and Jaina and Anakin Solo were lost, as was Ben Skywalker, and Mara Jade, and so many other characters I liked along the way. My love for the films from my... well, my entire childhood, and my adulthood, was stronger than my love for the novels or the comics... Actually, if they had taken some cues straight from, say, Dark Empire that would have been cool. But, just a handful of hours out from The Force Awakens, I am glad for what has come instead of something beholden to decades of stories crafted by a whole lot of writers and, thus, not that cohesive.

Having Han Solo as a "father figure" for Rey (Daisy Ridley) and as a father to Kylo Ren (Adam Driver) was a welcome part of the story. That Kylo is the son of Han and Leia is not even the big SPOILER, by the way; they establish his identity fairly early in the film, not long after Han is introduced into the story. The relationship between Han Solo and Kylo Ren also makes for the big emotional heart of the story. That...

--the BIG SPOILER is coming--

That Han Solo's death is a classic, filmic, Freudian death--the son killing the father in order to become a man himself--is vital to the lifeblood of Star Wars. It is important to the mythic story that has been with us for four decades now.

PART III - ON THE MYTHIC STRUCTURE

On the ride home from the film today, I was thinking about the structure of the original trilogy, how despite revenge not being a Jedi thing, Luke Skywalker is set up for a vengeance plot in A New Hope, then that vengeance plot is upended in The Empire Strikes Back and becomes a very different story by Return of the Jedi. The son is no longer killing the father simply to become a man (and revenge is forgotten) but to save his father. Anakin Skywalker must be saved. Luke becoming a Jedi Master is a secondary result.

In many human myths, everyone is related to everyone else. The Greek pantheon, for example, is involved in a whole lot of incestuous relationships. That Kylo is the son of Han and Leia and grandson to Anakin Skywalker augments the mythic quality of the larger Star Wars story.

(That there's an inkling of some mystery as to where Rey comes from suggests another level to this mythic structure. And, presently, I can appreciate the structure over, say, something more original. Similarly--and this may be my rose-coloured glasses coming into play again--I don't mind so much that the First Order had a giant weapon again. It can play as the unoriginality of the First Order, out of the remnants of the Empire, perhaps more than the unoriginality of the filmmakers. Hell, there were already giant weapons beyond the two Death Stars in the Corellian trilogy, the Jedi Academy trilogy (well, that weapon wasn't big so much as powerful), Darksaber, the Star Forge... Even the World Devastator in Dark Empire... The Maw Installation and Umak Leth--and the Empire itself, obviously--were all about superweapons. In fact, getting bigger than Starkiller Base in The Force Awakens will be difficult, unless the filmmakers really think about Darth Vader's line (echoed in the Force Block image above)--"The ability to destroy a planet is insignificant next to the power of the force." The super weapons are also insignificant next to the power of the family ties and personal relationships in Star Wars. (And, both are more powerful than the politics, which is where the prequels fail a lot, showing us the stuff that A New Hope would have mentioned in passing.) The failure of the Empire, and the failure of the dark side, is that it thinks that sheer force (not the force) is the greatest available thing. Luke's Academy students knocking a Star Destroyer out of orbit by working together is a far more powerful (and memorable) moment in the Jedi Academy trilogy than Kyp using the Sun Crusher. I rather hope that Finn's (John Boyega) willingness to turn against the First Order might lead into a more nuanced story about who those Stormtroopers are. I mean, the idea that Finn and other Stormtroopers were taken as children (or cloned?) and indoctrinated is a far more insidious threat than a giant cannon. A giant cannon is a physical thing that can be destroyed. Indoctrination is built on ideas and the fact that the First Order came from the Empire suggests that such ideas last.)

The mythic structure is helped along here by the link between Kylo and Finn and Rey. And brings me back to the parenting thing. Each of these characters was taken from his or her parents--Kylo to study under Luke, Finn to fill the ranks of the First Order and Rey... Well, we don't know that one yet. The generational nature of the story speaks to a historic cycles of repetition of themes. Leia and Luke and Han absolutely must be part of this story because that is the story. Parents and children, separated by the larger forces of the universe, children raised badly, and parents having to take responsibility for it.

To just tell another Star Wars story, unrelated to the throughline of the previous films, would not have worked. (Having some side stories like the planned Rogue Squadron film, though, will be fine, as long as the backbone remains this generational conflict. Anakin and Padme beget Luke and Leia, Leia and Han beget Ben (ooh, another minor SPOILER; Kylo Ren's name was Ben). The Old Republic begets the Empire. The Empire begets the Rebellion. The Rebellion begets the New Republic. The New Republic begets the Resistance. The Empire begets the First Order. (There's a theory going around online that Supreme Leader Snoke of the First Order will turn out to be Darth Plagueis, which would bring things full circle.) For the larger story to work, it must remain generational, mythic. This is fantasy. It just works really well that way.