a full measure of life

The question then: why does something like Highlander II happen? The explanations have been offered of course, stuff like economic collapse in Argentina just as production was underway there, for example. But, that is just an explanation for or why some of the awfulness exists. Obviously, there was some initial script, before there were money problems or investors taking over problems, and that script included aliens from the planet Zeist, and that script ignored a great deal of the original. What kind of cynical Hollywood puts this kind of thing together and ever thinks it's a good idea? Or does it think it's a good idea, at all? Is it just after money? Is it simply Hollywood banking on the familiarity of a name?

Regarding that last question, I got curious. For anyone to think you could bank on the Highlander name (for anything beyond a syndicated late night tv series, as Highlander would have a year after the awful sequel), science fiction and fantasy had to be doing particularly well at the box office, one would think. To start, Higherlander II was #3 it's opening weekend. #1 that weekend was Wes Craven's The People Under the Stairs, horror, with some expected audience overlap. Curly Sue was #2 in its 2nd weekend. The Fisher King, which definitely appeals to a fantasy audience, was #9 in its 7th weekend. Terminator 2: Judgment Day, science fiction but with some mass appeal (back to that in a moment), was #14 in its 18th weekend. (I saw all these movies in the theater, of course.)

Terminator 2 would be the #1 movie of the year. Behind it, the pseudo-fantasy Robin Hood: Prince of Thieves, then the animated fantasy Beauty and the Beast. In fact, the top ten for 1991 was remarkably nerd-audience friendly:

So 6/10 there are genre films. Teenage Mutant Ninja Turtles II: Secret of the Ooze was #13. Star Trek VI: The Undiscovered Country was #15. The Rocketeer, the aforementioned The Fisher King, Bill and Ted's Bogus Journey, Freddy's Dead: The Final Nightmare also fell into the top 50.

The previous year had Teenage Mutant Ninja Turtles and Total Recall in the top 10. Back to the Future Part III at #11. Flatliners, Misery, Arachnophobia, Robocop 2, Gremlins 2: The New Batch, Darkman, Predator 2, Child's Play 2, Jacob's Ladder, The Exorcist III and a reissue of Fantasia fell into the top 50.

Now, the original The Terminator was #21 for 1984, the original Highlander barely scraped its way into the top 100 for 1986; it was #98, right behind My Little Pony and right before Transformers: The Movie and The Hitcher. Both were hits on video. Both went from a mid-80s original to a early 90s sequel. Of course, Terminator 2 is one of the great science fiction films while Highlander II is one of the worst (at least of those wth a budget)...

But, it is strangely watchable. I'm writing tonight we'll after the film is over instead of during it. It flows quickly, if confusedly. It's still not any good. And the worst of its dialogue stands out even more. But, it is watchable. Of course, any movie seems more watchable the more you watch it. You just get used to it. Like anything, I suppose.

Still, I wish I had time to really look into why Terminator got the audience and Highlander didn't. One takes future science fiction and places it into modern day Los Angeles, the other takes medieval sword with a little bit of sorcery and places it into modern day New York. Is it America's love for guns that pushes Terminator ahead? Is science fiction inherently more palatable for the mass audience than fantasy? I love both, so it's hard to differentiate for me, hard to look at them clearly, look at them fairly. Obviously, the direction is different. Cameron is a better director than Mulcahy. I'm not sure if Cameron is a better writer than Widen. But, maybe the auteur factor matters here. Cameron wrote and directed Terminator. Maybe the charisma of the leads matters. Michael Biehn and Linda Hamilton have far more charm than Christopher Lambert. Connery's got more than any of them, but his screentime is limited. And as far as the villain goes, Clancy Brown's Kurgan has more personality but not nearly the same amount of menace as Arnold Schwarzenegger's T-800. I didn't see the original Terminator on the big screen, but I knew Schwarzenegger already from The Villain, and both Conan films. I did see Highlander on the big screen (a theater that is now a school supply store), and I knew Lambert from Greystoke: The Legend of Tarzan, Lord of the Apes. Maybe it's a bit of that, too. Lambert was lesser known than Schwarzenegger... 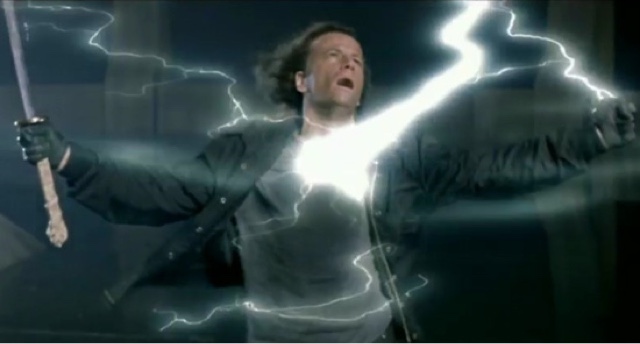 So, then I watched the original trailers. The Highlander trailer is both confusing (mixing glimpses of boxing, Scottish highlanders going into battle, a swordfight in a parking garage, and professional wrestling) and gives away too much (it's got Connor explaining who he is to Brenda). The Terminator trailer, on the other hand, is far more straightforward but also gives away too much... but encapsulates its plot so nicely in the end: "One came to protect her, the other came to kill her." Relative to "There can be only one," one has to wonder, one what? and then go see Terminator.

For the record, both trailers have some amazing voiceover going on.

And, I still haven't answered the important question. Why did the sequel to Highlander involve so much bullshit (even before its problems)? And why did Terminator not have such bullshit? Or was the initial popularity of either the reason expectations were higher for Terminator than for Highlander? Or was it even simpler? Terminator came out just in time for Halloween, and it had the scary, robot stalker thing going on. Highlander, instead came out in the cinematic doldrums of March. Of course, then you have to work backward from there, too. Release dates are not arbitrary...

But I was talking about Highlander II.