we forgot about the flowers

Changing gears. After watching Halloween for a week, my daughter saw the movie that's on and asked "what's this got to do with Halloween?" I think she thought I was doing horror films for October. If we're lucky, I'll get to another horror film before the month is done but, no, I'm still deconstructing my childhood, watching the movies I saw often when I was a wee lad. This may mean some abrupt turns in theme or style, like today. From the beloved Halloween to a film I actually only remember portions of, and don't really know if it's any good (it has a 6.5 on IMDb, but sometimes you can't trust IMDb voters, of course). The film is Ice Castles. Notably, it's the actual plot I don't remember. Some obvious points--ice skater, olympics hopeful, in an accident, loses her eyesight, has to learn to skate again. Meanwhile, there's a romance. Maybe there's not much more, plotwise.

Plenty more story right away, though. Lexie's (Lynn-Holly Johnson) boyfriend Nick (Robby Benson) just quit his job and has no interest in talking about why. Her father, Marcus (Tom Skerritt) is widower, who has been, in a matter of minutes, distant, belligerent, and distant again. Her coach Beulah (Colleen Dewhurst), who runs, as Marcus puts it, a broken down bowling alley and a broken down skating rink, is strict, as a coach must be. Nick just wants her to have fun. Meanwhile, there's some other woman looking on. I don't remember her.

Which is interesting, because it seems like she's going to be important. A potential new coach coming in to swoop up this up-and-coming skater, perhaps...

Sure enough, she shows up at Beulah's place. Beulah knows who she is. Miss Mackland. Wants to train Lexie. But, gets up to leave when Beulah tells her Lexie is 16. Apparently, that's too old to learn her "figures". Cut to, Mackland, Beulah, and Marcus talking, deciding Lexie's life for her. Marcus is keeping it from happening, because he's broken inside, of course.

And, so it goes. Despite his misgivings, Marcus lets her go away to train. Meanwhile, Nick tries out for a hockey team--which when asked by Lexie if that's what he wants to do, he said, yeah, it's fun. Meanwhile, Mackland is so strict that, when Lexie shows off for an audience by doing a triple she hasn't trained for, she threatens to send Lexie home.

Insert a reporter, Brian Dockett (David Huffman), into the story, because becoming a world class skater in six months is a story. Before he and Lexie even speak to one another, he's framed in various shots, watching her skate a little too intently. And being followed by a film crew separates Lexie from the other skaters, and is just one more detail pulling her away from Rick when she gets to call home to talk to him. French skater falls apart and Lexie is the one getting all the attention.

And, I suppose it's a clear sign this is the 70s that a movie that earlier hinged on Lexie's age, now has her getting involved with the reporter. (While Johnson was three years older than her character, Huffman was 13 years older than Johnson. It's a good thing the producers didn't talk Johnson into a nude scene, because I assume it would have been here, and with the visual language of film that would have been an even bigger transgression against her relationship with Nick.)

But the moment that Nick sees her skate afterward, and he's shocked by how good she is is a nice moment. Robby Benson sells it pretty well. Then, immediately after, he sees her kiss Brian on the sidelines, and without dialogue, he's already got some nice grief and rage going on. Then he says, "It looks like you've got everything you need" and she leaves. She's winning at other people's expense. It's interesting. First the French girl, who they had previously established had some mental breakdown or something in the past and no one expected her to be skating, gets psyched out watching Lexie and falls down repeatedly. She falls. Lexie wins. Now, Lexie has left the old coach behind, the old boyfriend behind, and Nick is there to find out right when she's headed upward. So, she gets bored with the fancy party and goes outside to skate by herself.

And--SPOILERS, except the film is from 1978 and I already mentioned that she loses her eyesight--she hits her skate on some metal divider (the outside ice rink has tables and chairs on the ice at one end for some reason), falls, and hits her head several times on the metal tables and chairs.

Then lots of scenes of sad people, sad talk--I may focus on the melancholy that is all over this film (and Roger Ebert's wonderful abhorrence of it) tomorrow, and finally with Beulah's push and her father's help, Lexie goes out onto the ice.

Weird memory thing: I remembered that when Nick first helps her on the ice, he's kind of mean to her. I completely forgot about her cheating on him (or didn't fully understand the import of that when I was little) so it seemed more just another coach being hard on her. But this is actually more personal. And, it's nice how the scene twists on that. It starts to get a little nice, she's leaning into him, and he realizes and abruptly gets mean again, tells her to do an axel. Then, they get their anger out one each other, and it gets better between them pretty quickly. But that initial scene of him helping her on the ice plays pretty well for marking that change to come.

There's a brief encounter with Brian again, mostly because he could let everyone know Lexie is blind (when she hasn't told anyone in the skating world) and she's about to skate again. His interaction with Nick is more interesting because the films lets neither of them be the bad guy. Lexie skates. Does well. And falls when people throw flowers. The end. 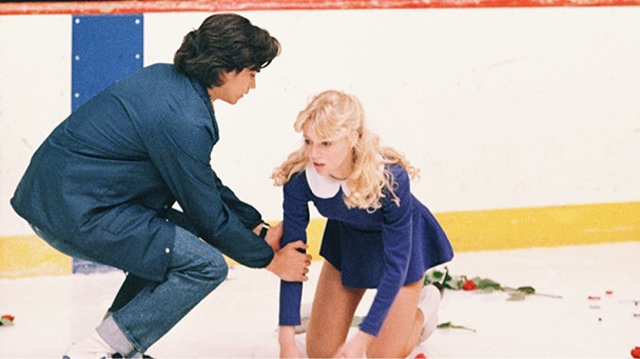