the opposite sex would never survive you

Had a good day so far. Ran a Dungeons & Dragons game then came home to watch the Golden Globes. Now For Your Eyes Only is playing and I almost want to be brief, after livetweeting the Globes.

So, there is this:

James Bond, regardless of the version (though, to be fair, I have only read one of the novels, and it wasn't one of Ian Fleming's originals; it was John Gardner's novelization of Licence to Kill), is a horrible role model for young boys. He's a womanizer who far too easily gets every woman he meets to fall for him. He's an expert at everything (so much so that it amuses me when he checks his map early in this film, as if James Bond does not have every street of, well, all of Spain already memorized), and there is never any actual chance that he might die. (Sharks won't even try to kill him when he is openly bleeding.)

No one should ever try to be James Bond. But, so many boys--me included--looked (and look) up to him. It wasn't just an 80s thing; look at most Westerns, look at superhero films, look at action movies out of any decade. In this blog (January 2015) I argued the case that so many hypermasculine American films from the 1980s, specifically, were about recovering from the nation's (and, in theory, all of her males') loss in Vietnam as well as second-wave feminism. American hegemony equated to masculinity. But, it's more than that. James Bond--his Britishness, and his cinematic timelessness--makes the case for a far deeper problem in terms of, for lack of more subtle terminology, the patriarchy constantly having to present its genitals (at least metaphorically) for the world in between bouts of violence against, well, whomever it can frame as dangerous. Hell, just a few days ago, our president tweeted yet another dick-measuring, suggesting that his "Nuclear Button" is "much bigger & more powerful" than Kim Jong Un's. It's essentially the American Way now. Every man is supposed to measure himself in comparison to other men, and America is supposed to measure himself against other nations. 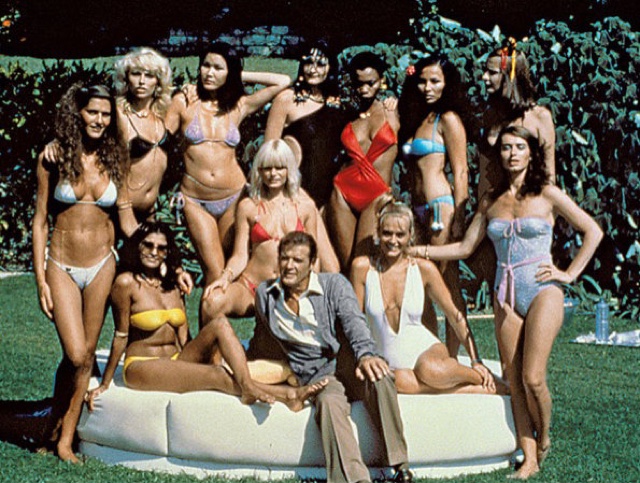 Case in point for 1981. Caroline "Tula" Cossey, a model who was born with Klinefelter Syndrome, got a part as an extra in this film--she walks past the pool in a tiny bikini in that Spain sequence early in the film. She has no dialogue, and probably was never even near a microphone. She is not even really a so-called "Bond Girl". And, I do not mean that in the way small-minded folks would have back in 1981 and far too many small-minded people would still, today. Cossey was outed as transgender by a tabloid writer under the headline "Bond Girl Was a Man". Just a passerby in one scene--cast for her body and her willingness to wear so little on screen, of course, but still a passerby--and her presence was controversial. She would go on to "become a pioneer" for transgender rights and recognition. She tells Huffington Post that her outing "propelled me into the realm of activism.... I wasn't going to spend the rest of my life feeling ashamed or apologizing for it and I didn't think anyone else should either." It wouldn't be until the 2004 Gender Recognition Act passed in British parliament that she could identify female on any legal documentation. Rebecca Rose at Cosmopolitan argues, "The tabloids' obsession with printing shocking transphobic headlines cost [Cossey] a marriage. She we'd Elias Fattal in 1989 and News of the World (who had previously outed her) ran the headline, "Sex Change Page Three Girl Weds". Fattal's conservative family had not been aware Cossey was transgender and they "summoned" him, the marriage was annulled. After this, she appeared in Playboy as their first trans model. Eventually, she gave up on modeling and acting "because she had difficulty landing the types of roles and gigs he wanted and also longed for a break from the media spotlight." She tells Cosmopolitanin 2015:

I don't know if I'll ever stop feeling like a second-class citizen. It's embedded and instilled from birth... You grow up, you don't fit in, you don't belong, you're bullied. That doesn't go away in five minutes. I don't think it ever goes away.

Meanwhile, we've had another thirteen Bond films, and the leads are still framed as masculine ideals, experts in everything, womanizers, and while we had Bibi Dahl in For Your Eyes Only, and Pussy Galore in Goldfinger, we got Christmas Jones in The World is Not Enough and Strawberry Fields in Quantum of Solace more recently. Still just as silly and demeaning but maybe not as sexist.