i sure as heck-fi remember you

I love that Bill Murray's Frank Cross in Scrooged seems not just misanthropic like Phil Connors, not just unlikable but almost belligerent to the point of being evil. When he watches his promo for Scrooge. And, they've got a phone code for when they fire people because, clearly it happens all the time--Code 9. And Frank times how long it takes for security to get Bobcat Goldthwait's Eliot Loudermilk out of the building. He is not a nice man.

He won't even let Grace take her son to the doctor, on Christmas.

And, in the alcove off his office where there's an exercise bike, it's got a definition on the wall (twice) for Cross: "A think they nail people to." Keep in mind, Cross is his last name. The name's a bit on-the-nose--Frank Cross.

More on the names in a moment. Frank steals an old woman's cab, but does he act like it was accidental--something like how Phil Connors pats his pockets in Groundhog Day as he passed the Old Man the first couple times? Nope. He flips her off and gets the cabbie to drive away.

As for names, there's Frank Cross, a nice Christ reference. His assistant is Grace, and sure enough the character has a lot of grace to be working for the likes of him and still seem to be enjoying her life. Loudermilk's name just sounds unpleasant, even though the guy seems to mean well when he tells Frank that his Scrooge promo might scare people.

In case you are not keeping up, the link between Groundhog Day and Scrooged--aside from the obvious, came up yesterday. Frank's lesson is far more spelled out than Phil's of course. His old boss tells him outright he needs to change--

--and then the three ghosts come just to make it all obvious. But, the two men experience something quite similar, both pulled out of the normal flow of time, forced to see how other people's lives are and how they affect them...

Frank's ad scared an old woman to death and his response: this is terrific, you can't buy publicity like this.

Each man is softened by a woman. For Frank, it's a woman from his past. For Phil, it's someone new.

"Have you tried staples?" Phil might have suggested stapling antlers to mice, but I think it would have obvious he was kidding. Frank seems to mean it.

Setting aside the ghosts deal and maybe linking them to Groundhog Day for the moment, I find myself curious about how Frank Cross scores on Kozlovic's (2004,2009) Christ-Figure scale. I will try to be brief.

1. Frank is definitely tangible. (1)
2. Frank is central to the story. (2)
3. It's hard to call Frank an outsider, though he definitely is not like everyone else.
4. Technically, Frank is not divinely sourced (though Kozlovic isn't strict on the divine angle), but he is put upon his path by a supernatural being. (3)
5. Frank does not have a dual-identity.
6. Frank does not fit the special/normal dichotomy.
7. No 12 associates.
8. Does not start his mission at age 30.
9. Frank does not have a betrayer associate.
10. I thought I might call Claire Phillips the Mary Magdalene figure, but there's not really anything sexual about her character. The key here is that the Mary Magdalene figure be "sexually tagged" (Kozlovic, 2009, p. 8). I think Grace might qualify, since her role here specifically hinges on her being a mother, but I'm not sure... and then Claire was just naked in a tub and Frank had to tell the Ghost of Christmas Past not to look. Sexual enough for my casual purposes here. And, she buys him a copy of the Kama Sutra. (4)

(Not to mention that bark-like-a-dog bit.)

Plus, Karen Allen reminds me of Margot Kidder's Lois Lane (the Mary Magdalene figure in the Superman movies) and was in Starman, which Kozlovic himself cites as exemplar of cinematic Christ-Figures.

11. Frank's old boss, Lew Hayward--that's his John the Baptist, "pointing prophet." (5)
12 & 13. Decisive Death and Resurrection & Triumphal Death... This one is weird. Frank gets to see his own funeral, while remaining alive afterward, but only because of the wonky flow of time with the ghosts. If it were his death that specifically served as the turning point for his final transformation, I might give him the "triumphal death" point... oh nevermind, He cries out and we get "Hallelujah" playing in the background. And, Eliot no longer tries to shoot him. I'm going to give Frank the benefit of the doubt and give him both points. (7)
14. Service to--as I type this Frank tells Claire that Christmas is "a time to be a little bit less selfish"--lesser, sometimes ungrateful others. Frank goes out of his way to not do this; even that line to Claire was about him getting his way. No point here.
15. Frank has no willing sacrifice... actually I'll give him the ending. He interrupts the live broadcast at the risk of losing his position as President of IBC. And, he needs all the points he can get. (8).
16. Frank is not innocent... at all.

"No-one could have been that simple, and good, and sweet, yet caring and wonderful. Not on this planet! No, baby! Unless they had something to hide."

17. No obvious cruciform pose that I noticed, though I did find this in a google search: 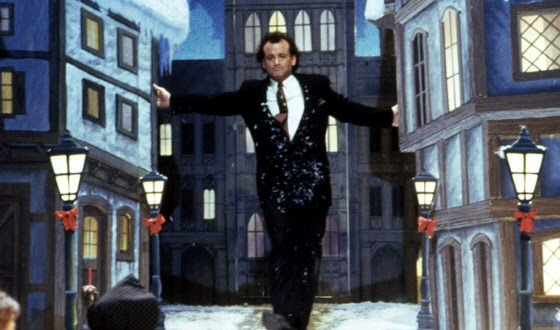 18. The "Cross Association" is right there in Frank's last name. But also, the way Frank leans up against the bars in the Future bit at the mental hospital... (9)
19. While miraculous, supernatural things happen around Frank, he is not responsible for any of them. 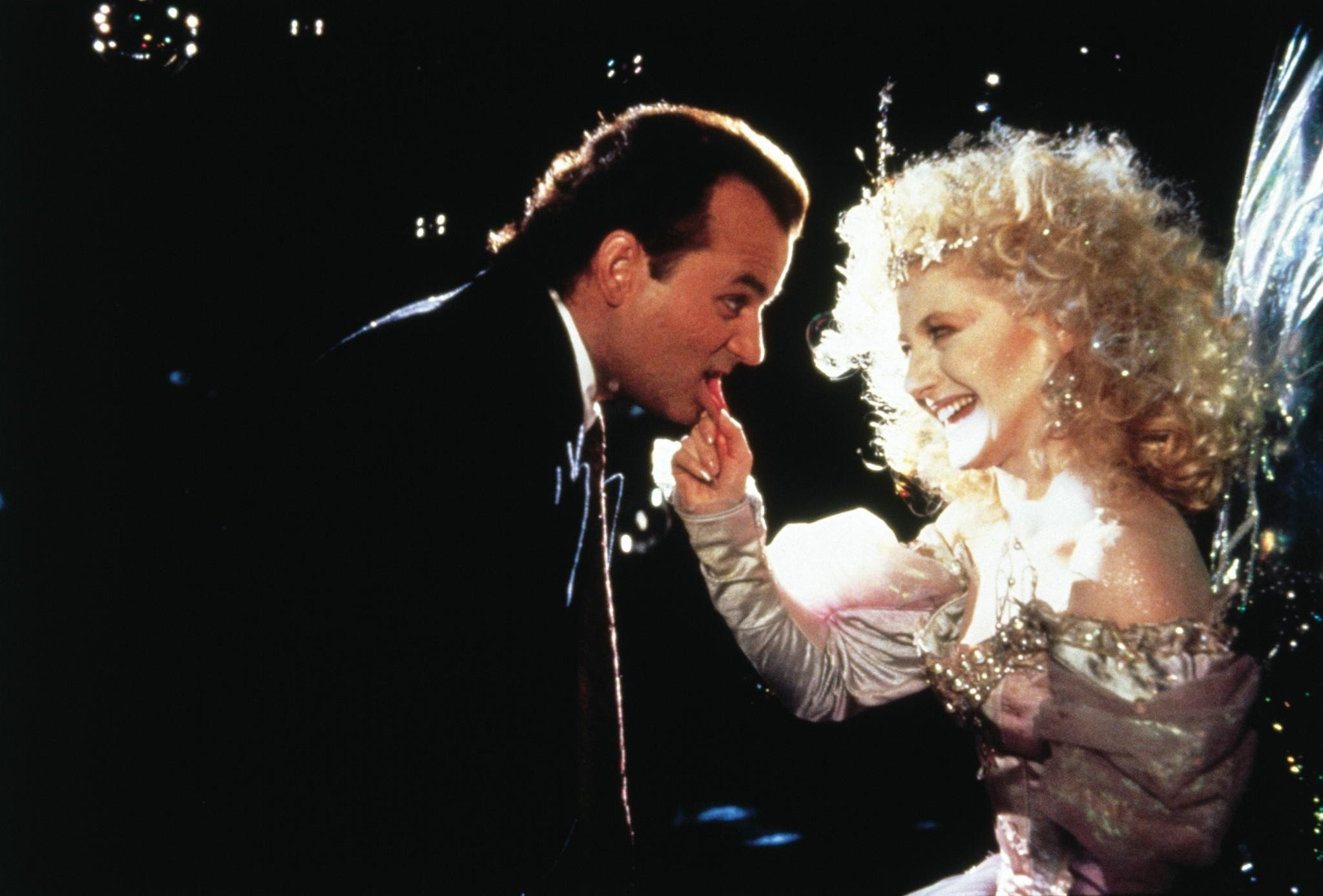 20. Frank is not a nerd or klutz per se, but he is definitely a bit mentally unbalanced and foolish, especially when playing off Carol Kane's Ghost of Christmas Present. (10)

Some dialogue on-the-nose: Frank asks Christmas Present, "Is he going to be okay?" He refers to Grace's son, but the answer can apply just as much to Frank. The answer: "It's his choice. Only he can break the spell."

21. Frank has no poverty to speak of, except in flashbacks, and I won't count those. One of his brother's friends--possibly the one played by Joel Murray (one of three of Bill's brothers to appear in this film; Brian Doyle-Murray plays Frank's father, and John plays Frank's brother James)--even calls him "the richest man you know."
22. Frank also never dresses like Jesus.
23. Frank, like Bill Murray, has blue eyes. (11)
24. There are definitely some "holy exclamations." Frank himself even said, "Oh, Jesus," after he saw the Ghost of Christmas Future costume. (12)

But, I'm more concerned with Groundhog Day as Christmas Carol stand-in. If I can spend as much time--not just today--on equating fictional characters to Biblical ones, I can certainly map characters onto other books. Yesterday I suggested that the Old Man was Phil's Ghost of Groundhog Day Future. I wonder now who might be Past and Present.

My kneejerk choice for Ghost of Groundhog Day Past is Ned Ryerson, a figure from Phil's actual past, his youth in Cleveland. I suppose, in a way, Ned does serve to demonstrate how Phil has maintained no ongoing relationships with the people in his life; he has kept his interactions shallow. I mean, Ned not only refers to him as "old buddy" but dated his sister Mary-Pat a couple of times. And, Ned is not a particularly forgettable guy. But, that is who Phil is, who Phil was. He doesn't keep in his mind the people he doesn't want to think about. Phil calls Ned a "giant leach" and "Needlehead" and he calls Chubby Man/Man in Hallway "Porkchop." These kind of nicknames, like all those Sawyer gave people in Lost--they serve a couple obvious purposes: they give the namer a little power over the namee, and they make it so that the namer doesn't really have to remember who the namee actually is. They are defined by the label, limited by its definition of their identity. This is the way pre- and early-loop Phil deals with just about everyone. Nan is "Hairdo," Rita is "Princess" (well, that one is not early-loop, but it is easily an example of Phil reverting to his old ways because he is at his lowest).

Phil's Ghost of Groundhog Day Present--seems like it should be Rita. She is Phil's gauge for how his day is going. His darkest days come when Rita has rejected him, his escape comes when Rita finally... (well, for the second time) accepts him. And, maybe his best day, the turning point for his entire journey comes because Rita spends an honest day with him--"god day." She is amused by him when he is at his most sarcastic, even when she is the butt of his jokes, she recognizes that something is wrong with him when he is confuzzled by the discovery of his new circumstance, she recognizes that he is down, and aside from that insult-by-poetry, she is nice to him.

(You might notice that I did not list her slaps as being not nice. Under the circumstances, I would call them appropriate, and not mean. Mean, to me, is unwarranted, undeserved. Those slaps--Phil needs them.)

Today's reason to repeat a day forever: to spend time with all my ghosts, all my demons, all my dreams, and come out the better for it on the other side.