Yesterday was about, well, bookmarks left behinds, articles left uncited... stuff I won't get to, stuff I don't need to get to, maybe even stuff I shouldn't get to.

There's an imaginary Groundhog Day Project entry that didn't happen once upon a time that is at or near the top of that list. I wrote a poem, so the story goes, while under the influence of something stronger than this water I am drinking right now.

You can read that poem, if you like, on my website. The thing is, there were more lines written that day, as I turned on Groundhog Day. Those lines follow:

dogs eating from a baby’s bowl

the earth tries to drop me
and the blindness falls away

skip moments
and everything is funny

every direction is the right one

feeling ocd and we’re all in high school

(in groundhog day we are all inside that tv)

light up croquet balls
like the seer stones in arda

i mute the sound and i’m in the movie

there was a ufo scared away by flashlights
and they only wonder “why so close?”
then it is real
around my head
like a flash and a torch and a dream

and the bird is listening

explosions
then we see fireworks in the distance

you ask who on tv just died
what about around the world?

breathe the air between the smoke

There's a few obvious references to Groundhog Day there, of course. Looking again at those lines recently, I realized that some of the best references to the film and its message are not so obvious...

every direction is the right one

Maybe that's more my thing than Groundhog Day's thing. I think about Daniel Quinn's line in Ishmael, that "there's no one right way to live." To me that line is almost synonymous with its opposite. Every way to live is the right one. There are limits, of course, if we want people to be able to live with each other, the basic do-not-hurt-anyone-else kinda thing, not just moral relativism. I grew up in a religious environment so I get it when people have their bigoted/righteous views about how someone else is living the wrong way, living in sin. But, I have become... well, I'm far more open now to letting people be who they want to be. Most of the time. I've got my limits. And, I'd like people to be able to live with one another rather than in Lord Humongous-led clans that kill each other over resources and differences in lifestyle. Hating someone because they don't believe what you do, hating someone because he's Muslim or she's a lesbian, or whatever examples you want to throw out there--it's inane to me.

Phil Connor's story is not about him becoming someone new, per se; it's about him figuring out who he was (or at least should have been) all along. I've said before, Phil was trapped in Pittsburgh, in his everyday, modern life, not in the time loop of Groundhog Day in Punxsutawney...

I'm reminded of a bit from John Zerzan's Running on Emptiness: The Pathology of Civilization:

As the smell of false and rotting order rises to the heavens, registering an unprecedented toll on living beings, faith in the whole modern world evaporates. Industrialism and its ensemble looks like it has been a very bad idea, sort of a wrong turn begun still earlier. Civilization itself, with its logic of domestication and destruction, seems untenable.

Lovely new indicators of how it is panning out include increasing self-mutilation among the young and murder of children by their own parents. Somehow a society that is steadily more impersonal, cynical, de-skilled, boring, artificial, depressing, suicide-prompting, used up, drug-ridden, ugly, anxiety-causing and futureless brings a questioning as to why it has come to this/what’s it all about… [as if we shouldn’t already know.]

(I'd give you a page number but my copy of the book doesn't seem to be on my shelf. It think it's at school. These quotations are taken from a prose interpretation speech I did my first semester in collegiate competition.)

The unprecedented reality of the present is one of enormous sorrow and cynicism, a time of ever-mounting everyday horrors, of which any newspaper is full, accompanies a spreading environmental apocalypse. Alienation and the more literal contaminants compete for the leading role in the deadly dialectic of life in divided, technology-ridden society. Cancer, unknown before civilization, now seems epidemic in a society increasingly barren and literally malignant.

Soon, apparently, everyone will be using drugs; prescription and illegal becoming a relatively unimportant distinction. Attention Deficit Disorder is one example of an oppressive effort to medicalize the rampant restlessness and anxiety caused by a life-world ever more shriveled and unfulfilling. The ruling order will evidently go to any lengths to deny social reality; its techno-psychiatry views human suffering as chiefly biological in nature and genetic in origin.

New strains of disease, impervious to industrial medicine, begin to spread globally while fundamentalism (Christian, Judaic, Islamic) is also on the rise, a sign of deeply-felt misery and frustration. And here at home New Age spirituality and the countless varieties of “healing” therapies wear thin in their delusional pointlessness. To assert that we can be whole/enlightened/healed within the present madness amounts to endorsing the madness.

The gap between rich and poor is widening markedly in this land of the homeless and the imprisoned. Anger rises and massive denial, cornerstone of the system’s survival, is now at least having a troubled sleep. A false world is beginning to get the amount of support it deserves: distrust of public institutions is almost total. But the social landscape seems frozen and the pain of youth is perhaps the greatest of all.

The overwhelmingly pervasive culture is a fast-food one, bereft of substance and promise.

Postmodernism advertises itself as pluralistic, tolerant, and non-dogmatic. In practice it is a superficial, fast-forward, deliberately confused, fragmented, media-obsessed, illiterate, fatalistic, uncritical excrescence, indifferent to questions of origins, agency, history or causation. It questions nothing of importance and is the perfect expression of a setup that is stupid and dying and wants to take us with it.

I'm not as angry as all that seems. I've mellowed a bit in recent years, especially this past year, watching this movie again and again. But, I still get the general sentiment. We've trapped ourselves in superficial accoutrements, the trappings (pun unintended but accepted) of modernity. I wrote of modernity back on Day 76: you could always use a little more, arguing with Wade (2005) and his religious presumptions, but ultimately agreeing with at least one of his conclusions:

For the record, I rather like a lot of the trappings of modernity. But, I'd like to think I'm more of a humanist at heart, that I value human interaction over our modern replacements.

and we all get along so well outside the world

Put two people in a room and they can learn to communicate, learn to accept one another. For class recently, I had to interview someone who's views differed significantly from my own. I picked Pooja, a fellow grad student who I knew to be Hindu, but during the interview I learned that the two of us, coming from different angles, both have a very accepting attitude about most people and most belief systems. I mean, sure, I think the foundation for most any religion is wrong but, generally speaking, anyone who truly believes in a particular religion is probably going to be a good person, and goodness outweighs being right any day. 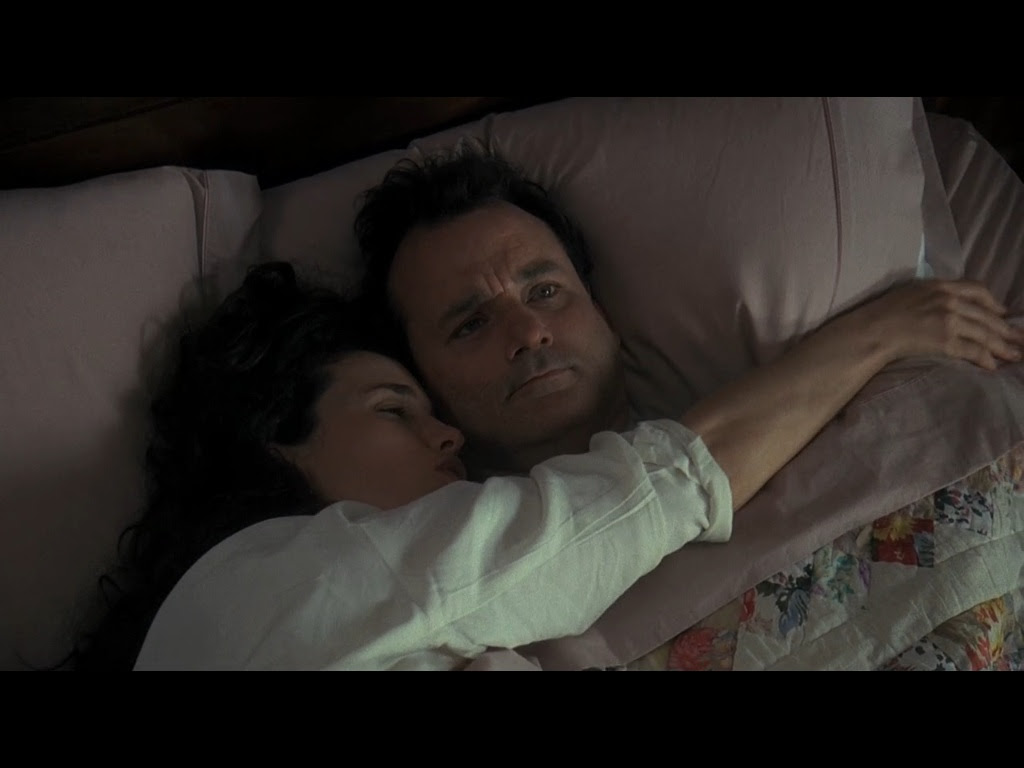 My point is, Pooja and I had more in common than expected. And, really, I figure it might be that way with any of us on this planet if we just sat down with one another and actually talked instead of attacking each other over stupid details.

We need to get ourselves outside of this world we've built... it's not about finding objectivity or relinquishing subjectivity. It's just about bothering to look, to actually look at one another and--it may seem a clichéd line, but--walk in someone else's shoes for a while. And we might find that we all fit together far better than we clash.

i mute the sound and i’m in the movie

In the story I'm telling above, there's a blurry line between the movie I'm watching and the people around me at the time. Lines of dialogue within the film mesh perfectly with lines of conversation without. I wish I could scribble down the lines as fast as they happen, because it will all make sense in the end, but I can't. And, I understand a guy who believes in God and wants to teach the world about Him. There's a moment of clarity in which everything fits together, person to person, film to reality, and our differences are just decorations that make us all the more exciting. What makes you you is what makes you interesting. What makes you you is what makes the world go round.

This film, this blog, my life--these are good things. The darker aspects of the world around me--this makes me hold onto Phil Connors and Groundhog Day all the tighter, to watch all the other movies I watch, to revel in fiction and artistry. If for no other reason, fiction is awesome because regardless of the ending, good or bad, in the end the curtain falls and the story remains as it was, as it is, as it will always be. Fiction is forever.

And, sometimes... sometimes, I figure, so are we. We just don't realize it, so we fight over time and space and petty grievances because we don't know any better. Sometimes we even delude ourselves into thinking we're doing what's best.

I will end with this, from Derrick Jensen's A Language Older than Words (and from that same speech all those years ago):

Today's reason to repeat a day forever: though I may have used this before, to quite simply and surely, just be.