that will be one adult and...

I was going to open with the following:

The people of Punxsutawney, PA are assholes. And, this is why. They've got one homeless guy in the entire town, and they can afford to have a whole lot of groundhog banners and groundhog trashcans, not to mention that stage on Gobbler's Knob and all those Inner Circle guys' fancy suits, but they can't help out one nice old guy with a meal and a warm place to be?

Then, I got sidetracked by math. To demonstrate that Punxsutawney was small enough that we can assume only the one homeless guy exists, I wanted to figure out just how populated Punxsutawney is. Mind you, I don't mean the real-world Punxsutawney but the film version. The film version of Punxsutawney is significantly smaller (in population) than the real one. I started by thinking the movie didn't tell us the population (a mistake I realized pretty quickly). So I looked up Punxsutawney's population, 5,962 as of 2010, closer to 7,000 in 1990 (the film presumably being set in 1993, so not far off). For comparison, I also looked up the population of Woodstock, IL, where they filmed Groundhog Day and where I visited back in February, so I've got a better (subjective) sense of what I'm dealing with.

For example, in my 3 1/2 days in Woodstock, I encountered only one individual who I would describe as obviously not well off... and I'm being careful about my description because he was not homeless (or "unsheltered" as they call it below) but was desperately in need of money after having recently lost his job and he was just trying to get money to take the train out of town. I'm not actually sure he was a local or if he was only passing through. I only spoke to him briefly. He seemed--appropriately, I might say--to resent the goings on in Woodstock, all the conspicuous consumption and whatnot.

Turns out, though, Woodstock is a bad baseline for comparison, since it is actually a lot bigger (population-wise) than Punxsutawney. In 1990, Punxsutawney was around 7,000 people, Woodstock around 15,000. By 2010, though, Punxsutawney had dropped to just under 6,000 (the previously cited 5,962), while Woodstock had grown to 25,084. But, Woodstock stats I found online gave me a demographic percentage that I didn't find in regards to Punxsutawney--42% of Woodstockians are single.

But anyway, the population of Punxsutawney in 2010 was about 54% female and about 61% aged 18-64. I note these specific numbers because of a line from Danny Rubin's original script:

PHIL (V.O)
Of the sixty-three eligible women in Punxsutawney, only forty-nine have so far been -- accessible. The last few are proving more of a challenge. (p. 37)

I was going to work backward from that--even though it's an earlier version of the story, and an even smaller version of Punxsutawney. I tried to recall how to find population overlap in sets, but outside of maybe 2 variables, I couldn't remember (and couldn't find a good explanation on Google). So, I chose to assume that the sex division was even throughout the age groups--the other age groups per censusviewer were 0 to 4, 5 to 17, and 65 plus. I was stuck with the 18 to 64 range as a starting point for who could be "eligible." Phil kisses Mrs. Lancaster so older women are certainly an option, it might seem. Taking this entire age range (61.14% of the population)... 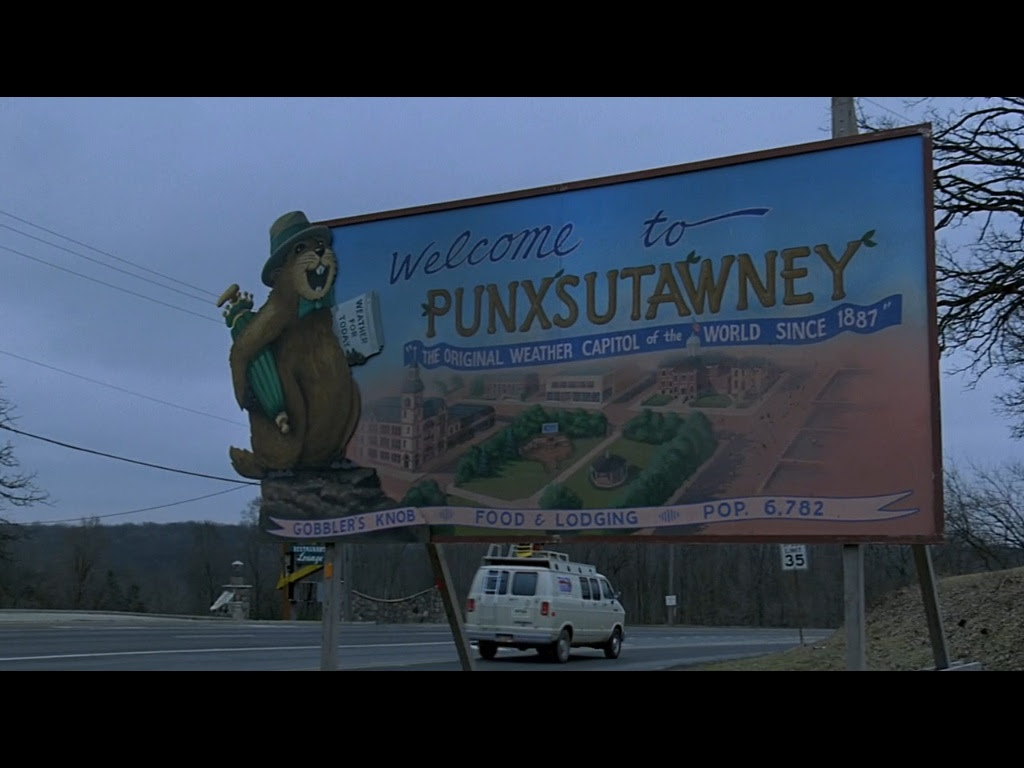 Looking at the other age ranges, I figured I could break down the 18-64 group a bit. Combining 0-4 (5.42%) and 5-17 (13.8%), and rounding off a bit to make things easier, I had about 20% of Punxsutawneyans aged 20 and under. Another 20% (19.64% to be more precise) were in the 65 plus range, which I decided to figure as being 65 to 85 (another 20-year range). So, with roughly 60% covered in the (rounded off) 20-65 range, and choosing to assume some evenness, that put about 20% between 20 and 35, 20% between 35 and 50, and 20% between 50 and 65. Though Phil kisses Mrs. Lancaster, I suppose it's possible that he doesn't usually go for women her age. Angela Paton, who plays Florence Lancaster, was 62 at the time of filming, and so, presumably is Mrs. Lancaster. Also, if we assume that Mrs. Lancaster is still married, she doesn't really fit the eligible bracket anyway, not to say Phil wouldn't have gotten together with any married women in his most hedonistic days, but that is an implicit line drawn by Rubin, I think, and it's an easy way to divide

Phil also doesn't seem to care much for "Hairdo" Nan at WPBH. Carol Bivins, who plays Nan was (probably) 51 at the time of filming. Doris seems clearly enamored with Phil, the way she stares at him on Day 3 for example, but I don't get the impression that Phil ever got together with Doris. Robin Duke, who plays Doris, was 38 at the time of filming. Andie MacDowell was 34 at the time of filming, so probably was Rita Hanson. Sandy Maschmeyer, who played Phil's French Maid-costumed date, Laraine, was (probably) 32 at the time of the filming. Marita Geraghty, who played Nancy Taylor, was 30. Phil's range might actually be pretty narrow... which means that he never took advantage of poor, confused Debbie Kleiser (Hynden Walch was 21 at the time of filming). If we assume Phil's range is simply between Nancy and Rita, 30-34 (actually, I'll round off to 35 to make it easy), and use my (probably) bad math above, with the new age range percentages, Phil's definition for "eligible" (based simply on age) is only about 6 1/2% of the population of Punxsutawney. But, 6 1/2% of film-Punxsutawney's 6,782 people is 440.83, still a lot higher than Rubin's original 63.

So, it becomes difficult. After all, Rita has dark brown hair, Laraine is blonde, Nancy had red hair; Phil is not picky when it comes to hair...

And, it is now 12:44am, the movie has just ended, and I haven't even brought this back around to the issue of how many homeless there might be in film-Punxsutawney. This uber-obsessive topic will be continued.

Today's reason to repeat a day forever: to not worry about numbers... at all.