really close on this one

My daughter--who just called her self "the queen of romance"--wants me to write today about how Phil and Rita have no chemistry.

That one is difficult. The problem with Rita and Phil is not necessarily one of chemistry. Afterall, Justin Harlan comments at Cinapse that "Bill Murray and Andie MacDowell show great on-screen chemistry" and David Glushakow at Examiner, says they "have a nice onscreen chemistry that make[s] this comedy even more enjoyable" and James Berardinelli at Real Views says, "While the chemistry between them isn't smouldering, they work well together. Their characters' romance is credible because it's low key." The problem is not chemistry.

Jennifer Wood at Complex provides some rules for onscreen chemistry. One of her DOs: "Cast actors with real chemistry." The Turner Classic Movies entry for Groundhog Day, written by Eleanor Quin, tells us that crew members on the film recall Murray's and MacDowell's

positive chemistry, despite what Ramis called a "strong beauty and the beast quality." In an interview he explained, "She is kind of luminous, you know, I mean she has this perfect skin and a lovely, natural quality, and Bill is, you know, a few miles of rough road there, and yet they looked great together and she seemed to really enjoy him so much!"

Another one of Wood's DOs: "Mix personalities with quieter ones." She explains,

There's a reason why they say that opposites attract. And if you've ever been out with a couple where both members have outsized personalities, you know it can be exhausting. Smart movie producers know that one boisterous personality is more than enough--and cast/shape a film accordingly.

It's about balance, and Bill Murray is certainly boisterous enough that you needn't have another big personality on a film with him... though Ramis had done that a bit before with, say Caddyshack or Ghostbusters or, to a lesser extent, Stripes. An example (not Ramis') where Murray was the one big personality (the ghost of future present notwithstanding) would be Scrooged. Another (sort of Ramis') would be Meatballs; there are unique aspects to a few of the CITs but the big personality is all Murray as Tripper. Andie MacDowell makes for a strong physical presence, sure, but personality? Not so much.

Another one of Wood's DOs: "Make sure the actors' talent levels are equally matched." This is one where Groundhog Day has some problems. Someone like Chris Elliott as Larry, even with very little to do, holds his own against Bill Murray, as do Marita Geraghty as Nancy or Angela Paton as Mrs. Lancaster, or Murray's own brother, Brian Doyle-Murray as Buster. Rick Ducommun and Rick Overton as Gus and Ralph (respectively), given a little more material, could have stolen a scene or two from Murray; hell, Overton almost does with his, "That about sums it up for me." And Stephen Tobolowsky--well, Ned does sort of steal the scene away from Murray, so it's Murray having to keep up with him.

And then, there's Andie MacDowell. Don't get me wrong, back in the day I thought Andie MacDowell was quite attractive--especially when she was in Greystoke, but there her lines all got dubbed over with Glenn Close's voice because MacDowell just couldn't perform past her own southern accent. In Rita Hanson, MacDowell has a character she can play... when she has something to do. And, she can trade lines with Murray well enough here and there. But, if you watch her during the "god" scene at the Tip Top, she comes off as a weird combination of overpracticed in her movements and having no real idea what she's doing. Ramis is used to working with comedians and many of the actors in Groundhog Day are comedians Ramis already knew or had worked with. MacDowell is neither. And, this is one of her earliest films... actually, I just looked her up on IMDb to be sure and realized that was more my experience of Andie MacDowell at the time. I knew her from Greystoke in '84, St. Elmo's Fire in '85. I didn't see Green Card when it came out in '90, hadn't seen Sex, Lies, and Videotape in '89, but I knew of both movies. For me, Groundhog Day was a notable return for the actress, but she'd had a few other movies and some TV work since Greystoke (and I hadn't realized until just now just how much earlier that film was than Groundhog Day). The "god" scene is just ending, and there's a nice bit as Phil finishes the "You like boats but not the ocean" speech where MacDowell manages a good reaction. Not the bit where she says, "Larry?" twice but right before that. Her playfulness on some of the "date night" sequence or in the playing card scene that is on now--that's where she shines. But, that's not romance. And, I guess that does not quite translate into chemistry... at least to everyone's satisfaction.

But, there's the wooden, robotic moments as well, like this bit in the final scene. Rita has nothing to do but wait for Phil's line, turn to hug him, and wait for another line. You can see robotic movement (or lack of movement, I guess) in the scene where Phil tells her, "I just want you to remember we had a beautiful day together once," then he goes to steal Buster's truck and Punxsutawney Phil. In the background, MacDowell stands there awkwardly, like she's not even sure if she's still in the shot.

But, I don't mean to harp on MacDowell's performance. I think that she's got her charming moments and, obviously, most of the audience that Groundhog Day has ever had has bought the romance enough. There's no real reason Rita should fall for Phil on that last night, but we buy it because Phil has earned it and we've accepted Rita as being worth the effort he's gone through. Will they have a successful relationship going into the future? I've written a bit on that subject before, but I'm not sure the future matters with most people's singular (or at least not as plural as my, or my kids') experience with the film. We want a happy ending, we want Phil to be happy and he seems to like Rita.

Really, I think Murray is charming enough, even at his worst, that we can buy his winning. If Rita is the prize he wants, Rita's the prize he will get, even if it takes a few ups and downs.

Is my daughter right, though? Clearly, a whole lot of people who have seen this movie over the past two decades disagree with her. And, while I wonder if Rita and Phil necessarily have chemistry or will do well together, I do think Murray and MacDowell have a bit of chemistry, at least some of the time. And, that's good enough. 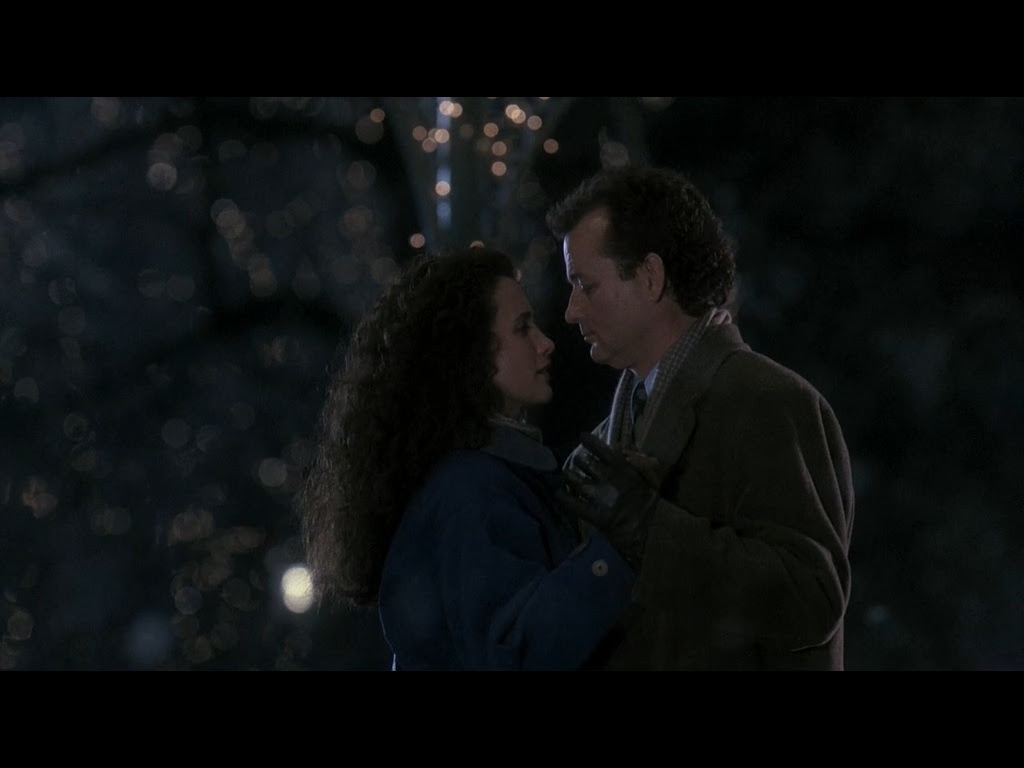 Today's reason to repeat a day forever: to figure everyone out so that I can fake chemistry with anyone.