what high school did you go to?

Two things: I just watched a short film Pablo (speech team member) posted to me on Facebook a couple days ago. And, I've been prompted with another sort of oddball topic from my daughter Saer.

First, the short film--The Other Side of Yesterday is a fairly simple thing, less than 10 minutes long, only two actors wandering around LACMA and talking. See, the woman, Iris--and I'll try not to be too SPOILERY--is stuck in yesterday, a trip to the museum she was supposed to take with her family but they were killed. Keller, who seems like he's her subconscious (or possibly some Adjustment Bureau-type agent if we take the film literally), convinces her that living in the past isn't a good idea. Simple enough idea, so-so acting, some great visuals but those mostly come from the art and architecture in the museum. The dialogue's a bit cheesy, but sometimes that works just fine like this bit from the end:

One truth remains constant: what's to come tomorrow, what's left behind in yesterday, is all determined by what we do today.

Second--my daughter asked me what the backstories were for our Groundhog Day characters. She specified, in high school.

I imagine Phil Connors may have participated in speech and debate when he was in college, or back at Case Western High... or maybe he would have thought it too nerdy... and yet he went into meteorology and/or some sort of media work in order to end up at Channel 9 Pittsburgh. His sarcasm probably would have made him the kind of debater I was, sometimes a smartass when something more level-headed was necessary.

--but I'm not sure he would have been that great a competitor; I have a feeling he wouldn't have put in the work necessary to excel. I wonder if he did a lot of drugs. Nothing too heavy, maybe some pot. It was the 60s, after all. And, some drug use might explain why he wouldn't remember the Ryerson twins, especially when one of them went out with Phil's sister, Mary Pat. 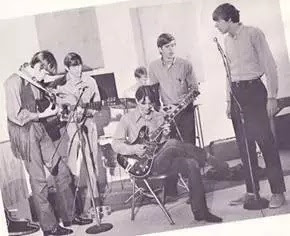 (That's Stevie Ray Vaughn in the middle, with the guitar.)

That tall skinny guy on the right in that photo is Stephen Tobolowsky (Ned Ryerson) in high school. Here's a better look at what he looked like with hair (though this is later than high school, I'm pretty sure):

As skinny as he was, I wonder how good he could have been at the whistling belly button trick. 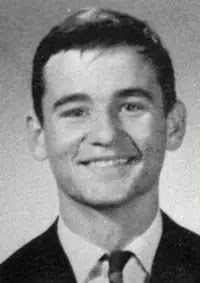 --if he went to "Case Western High" he probably actually got good grades. Near as I can tell, the only thing resembling a high school that Case Western Reserve University had in the 60s was a pre-scholars program. There seems to be a Case Western Reserve High School in the present, but a Google search is weirdly uninformative about it. Anyway, Phil was probably good student but also something of a class clown. Like Fritz Coleman (real life Weather Reporter (without a degree in meteorology, mind you) from Pittsburgh but making it big in Los Angeles), he probably tried his hand at being a comedian before landing his gig as a Weather Reporter. And, maybe that started in Cleveland before he headed over to Pittsburgh. But, let's not get ahead of ourselves. In high school, I'm sure he was popular enough. He wasn't a jock, but as nerdy as some of his proclivities might have been, he probably made light of them and would amuse anyone and everyone with a joke or a well-placed insult. And, he probably charmed at least a few girls in his high school days; I don't imagine he had a steady girlfriend, if he had any real girlfriend, but it was the 60s, so he probably wasn't a sad, virginal, lonely nerd like we might portray such a character if he were in high school today. 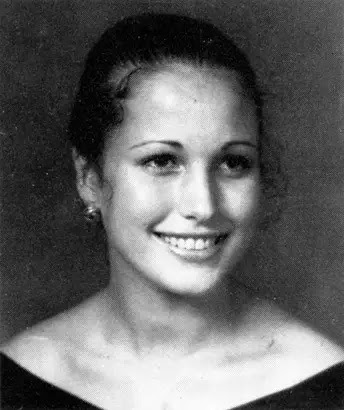 --she was studious, I'm sure. She never tried drugs, and made sure everyone knew that. And, considering her family has a summer home on a lake--presumably in the Carolinas (just like Andie MacDowell's real life family had one in North Carolina), they were probably well-to-do. Having money and being pretty, she could have been resented, but she was quiet in the halls and kind to everyone when given the chance. She studied hard and always turned her homework in on time. Inspired by another Rita, Rita Moreno, maybe she liked to go out for school musicals (the lead of course, though she would be perfectly happy with a supporting role). She didn't have time for boys; sixties America, with the woman's liberation movement going on, Rita probably liked to think of herself as a liberated young woman. In college, she avoided a lot of the more radical elements, and in the 70s, when her friends were getting more free, she turned a little more conservative. In the 80s, she produced some local theater and eventually got a job at a local station in South Carolina, but that was not fulfilling. When she got a chance at a producer job in a bigger market like Pittsburgh, she leapt at the chance.

--he was like Phil Connors minus the charm, just like on their trip to Punxsutawney. If his high school had an AV Squad, he was on it. I imagine him a bit like Paul Pfeiffer in The Wonder Years, actually. You can see why his few friends would like him, but he's just a little too weird and nerdy for most to pay him any mind. Unlike Phil, Larry probably got pushed around by the more popular kids, the jocks and whatnot. He probably kept to himself more than anything, spending a lot of time reading Marvel Comics in his bedroom. He especially would have liked Spider-Man because he was a teenager like him, but with superpowers. He wouldn't have cared for the X-Men much, though, because they were too much outsiders like he was. Larry and his small circle of friends probably made little films that no one wanted to watch except maybe their parents. It's set at the end of the 70s, but I figure Larry is like the kid in Super 8 in that regard, but without the excitement of real aliens or a chance with his lead actress.

Today's reason to repeat a day forever: to invent background stories for every fictional character. Seriously, every.