The character of Phil Connors is named Phil because that is the name of the groundhog in Punxsutawney's Groundhog Day celebration, as Rubin (2012) explains:

And who is the center of attention for the festivities in Punxsutawney? A groundhog named Phil. For the time being, I decided to call my character Phil as well, hoping that somehow there would be resonance created by associating my guy with the groundhog. (p. 15)

Many authors have latched onto that link between the two Phils, including of course Benesh (2011) and myself. And, Phil himself makes the connection before he kidnaps the groundhog and kills them both. But, after writing about names yesterday, I wondered if there wasn't some more resonance in Phil's name that just the obvious.

From the Greek name Φιλιππος (Philippos) which means "friend of horses", composed of the elements φιλος (philos) "friend, lover" and ‘ιππος (hippos) "horse". This was the name of five kings of Macedon, including Philip II the father of Alexander the Great. The name appears in the New Testament belonging to two people who are regarded as saints. First, one of the twelve apostles, and second, an early figure in the Christian church known as Philip the Deacon.

I've linked Phil to the apostles before, except he was not one of them before. He was the Christ-Figure. But, let us look at the connection to the Apostle Philip who, though a Saint, should not be confused with Philip the Evangelist.

In the Letter from Peter to Philip, Peter asks Philip to rejoin the other apostles. There is a tradition that Philip had undertaken his own mission, separate from the other apostles, much as Phil Connors has left Pittsburgh to speak to the people of Punxsutawney. Philip was responsible for, a miraculous healing, not unlike Phil Connors saving the life of Buster Greene. Saint Philip is often associated with his sister Mariamne and Bartholomew, with whom he was sent to preach in Greece, Phrygia, and Syria. Professor Francois Bovon has been cited suggesting that Mariamne and Mary Magdalene were one and the same, but, more precisely,

he did not in any way state that the name "Mariamne" of the Acts of Philip should be the linked to the historical Mary Magdalene of the first century. In fact, the Acts of Philip presents the geographically improbable assertion that the figure "Mariamne" was both the sister of Philip of Bethsaida and of Martha of Bethany. In reality, Bovon proposed that this Mariamne, who both evangelized and baptised, was the same character whose persona in time evolved to become the fictitious Gnostic sage and evangelist, more closely linked to the Mary of Magdala in the Manichean Psalms, the Gospel of Mary, and the Pistis Sofia.

(Perhaps the confusion in the middle there lies in the fact that Mariamne was sister to Martha of Bethany but was not sister to Philip but rather his bride, having become interested in him while he was trapped in a time loop.)

Recall, in my original Christ-Figuring entry, I connected both Nancy Taylor and Rita Hanson to Mary Magdalene relative to Phil's Christ.

(To be fair, I also linked Rita to John the Baptist and Judas.)

Specifically, I linked Rita to the Mary Magdalene-Figure because Kozlovic (2009) explains that this woman may be "sexually tagged," "Sexual consummation of such relationships are denied according to Scripture, or are repeatedly delayed to generate sexual tension until eventually given in too [sic] according to the Jesus-Magdalene marriage mythology" (p. 9). That sexual tension is very befitting of Groundhog Day "date night" sequence. So, the transitive property tells us then that Rita is Mary Magdalene is Mariamne is both sister and lover/wife to Philip.

(And, maybe we should be scouring Groundhog Day for clues to the location of the Holy Grail.)

Bartholomew, on the other hand, is a witness to the ascension of Christ just as Larry is witness (cameraman) to the waking of Punxsutawney Phil.

Additionally, Bartholomew is associated with and often conflated with Nathanael of whom Jesus said, "Here is a man in whom there is no deception" (John 1:47). Recall Larry, in his interaction with Nancy, coming right out with the line, "Hey, would you be at all interested in seeing the inside of the van?" Larry has no subtlety, no deception...

...if we ignore the thing about dropping a tip.

The name Bartholomew also reminds me of Bart Simpson, which reminds me of Futurama which I have written about before in this blog. The lead character in Futurama? Philip J. Fry. And, in part two of my Christ-Figuring entry, I decided Phil Connor's middle initial was also J for James. And, each of these Philip Js, Fry and Connors, end up in a time loop with his beloved. 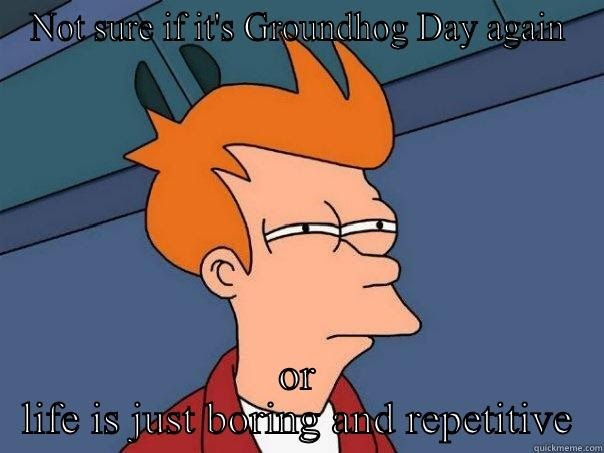 That would make Rita into Leela, I suppose, and Larry into Bender. Even though Rita's the robot.

Today's reason to repeat a day forever: to concoct a way to get my own Sainthood, so I can figure in some guy's research on Christ-Figures, not just because of my contribution to the Kozlovic-Black Scale of Christ-Figuring, but also because he's got to identify a Saint Robert-Figure.

(Dismissing, of course the other Saint Robert.)