you never talk about work

There’s a new arrival on my shelf. That Beanie Baby Punxsutawney Phil on the lower shelf (in the photo below) was a gift from the speech team for which I am one of the coaches. It was supposed to be part of my gift basket thing at last week’s banquet but hadn’t arrived in the mail in time. I got it yesterday before class. 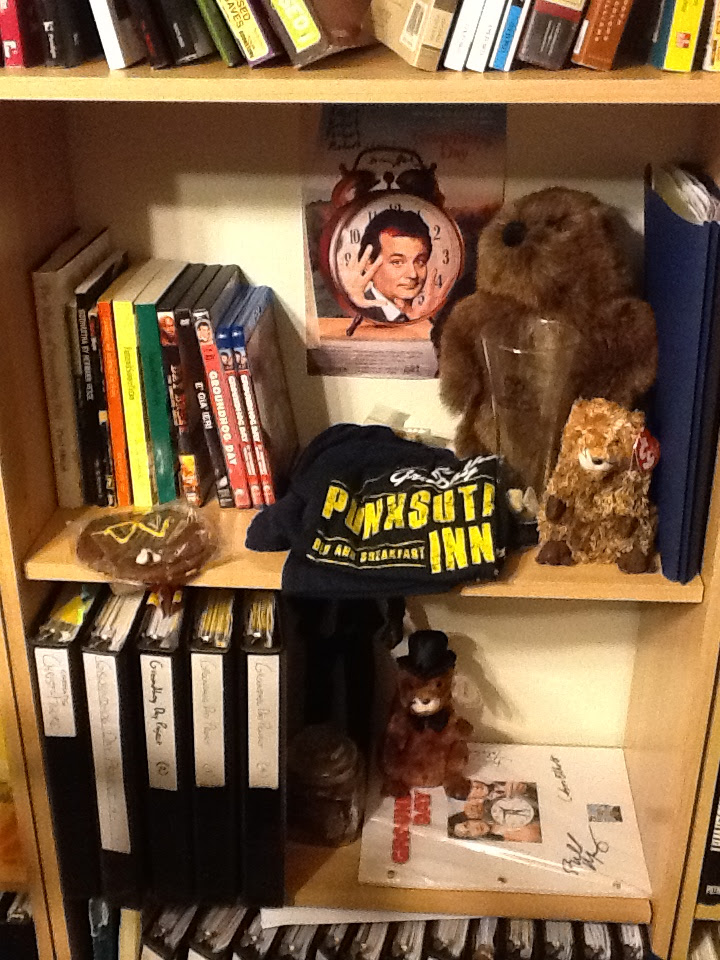 And, since I was asked yesterday by Tracey (next year’s Vice President of our speech team) what stuff I’ve got on my Groundhog Day Project shelf (after I mentioned that this guy would end up there), I will explain what’s in the photo.

which I cannot seem to locate, so maybe I’m imagining it

—or maybe I was referring to the concept and not the title, in which case all is well), Ryan Gilbey’s BFI critique of Groundhog Day, Herman Hesse’s Siddhartha and Thomas Moore’s Utopia for the books. In front of them is a Woodstock Willie cookie I got while I was in Woodstock. This was my “prize” for getting the opening trivia question right in the trivia contest. I had already bought and eaten one of these the day before so I kept this one as a souvenir.

Next to the books are three issues of Fantasy & Science Fiction magazine—each one has a Richard Lupoff story in it (12:01 P.M., 12:02 P.M. and 12:03 P.M.). Then come the DVDs—Day Break, È già ieri and Groundhog Day (which has a DVD (case only because the disc pretty much stays in the player) and two blu-ray copies (one laser burned, one not)).

The Punxsutawney Inn t-shirt was a birthday gift from the speech team back in January. The mini-poster I got at the symposium in Woodstock (Danny Rubin signed it). The glass and the large groundhog were souvenirs I bought in Woodstock, and inside the glass are two bits of stone from the quarry where Phil drives off the cliff to his death—I did not acquire these myself as a) I did not have time to drive out to the quarry because it was some distance west of Woodstock and b) I think the quarry, as it appears in the film, just doesn’t exist anymore; I believe there’s a manmade lake there now (presumably not as deep as that quarry was). The smaller Punxsutawn-e Phil Beanie Baby was a Connersmas present from my daughter Saer (who has several times prompted topics for this blog).

The blue folder to the right of the stuffed groundhogs is like a scrapbook of my trip to Woodstock; it’s got ticket stubs, receipts, brochures, my walking tour and screening notes (written on the backs of Groundhog Day Project postcards because that was the only paper I had), sheet music, a groundhog mask, schedules, raffle tickets (I did not win), my bowling score sheet and probably several things I don’t remember; I haven’t looked in there in a while.

Bottom shelf starts with my Christ-Figure binder, containing hardcopies of my sources for my Christ-Figure paper. Then are the four (so far) Groundhog Day Project binders. First one has some of the stuff I cite often like Daughton or Bacha or Foley. The second one, among other things, my hardcopy of Benesh and my hardcopy of Ramis’ second revision of the screenplay. Third binder has, among its contents, a lot of my sources when I was writing about Ramis after his death. Fourth binder has more recent stuff. It isn’t full yet. There is also a manila folder with sources I have read but not referenced yet, but it isn’t on either of the shelves. Sometimes it’s in my bag, sometimes it’s on or in the storage bench under our stairs (closer to where I generally write these blog entries than the bookshelf).

You can’t really see him, but my Phil Connors doll is just to the right of the binders, behind that glass jar. That glass jar has nothing to do with Groundhog Day but with change in it it’s heavy enough to keep the binders from falling. That jar actually came with candy in it and it was a graduation gift way back when I graduated high school... in 1993, so I guess it connects to Groundhog Day in that 1993 is the year the movie was released in theaters as well as the year I was released into the wild, so to speak.

My new arrival, a 2004 Punxsutawney Phil Beanie Baby, sits on my other copy of the second revision of the script—I really wish I could get my hands on the first revision or the shooting script—signed by Bill Murray and Chris Elliott when I got it and now also signed by Stephen Tobolowsky. By the way, I just checked to see if the poem inside this Phil’s tag was different from the other one. It is. It goes like this:

February 2nd has been decreed
A special day, special indeed
When I predict just once a year
If winter stays or spring is near!

I kind of wish that Danny Rubin’s How to Write Groundhog Day were available not as an e-book so I could have it on the shelf, but oh well.

Anyway, that is the current state of my Groundhog Day Project shelves.

It occurs to me that I was also asked yesterday—by Jackie (another speech team member)—why I wasn’t a poet. She was looking through my composition book that has some of my poetry in it—I mentioned yesterday that there was an open mic on campus and I read one of my poems; well, I had my book out trying to figure out what I was going to read. She and Tracey both read some of my poems and liked them. Had I known the open mic was only going to last an hour and I would only get on stage once, there would have been no question what poem I would read—The Ballad of Phil Connors—but, alas, I did not know, and I was saving that one for my second go on stage to namecheck my blog as intro and celebrate Day 300 with a public performance. I guess I will save that for the Day 365 party... and I just realized that will be a Friday night. Anyway, my answer to Jackie’s question was a simple one—and I imagine my future self, if my thesis goes according to the current prospectus (a draft of which was completed today) waiting with bated breath... actually, considering the mention of the speech team, this would already get coded for personal information. But, it’s about to earn itself a special place in the second coding pass. My answer was, I generally write poetry when I’m in a bad mood. Lately, I have been more happy so lately I don’t write poetry. I think, unfortunately, there’s a similar thing in place in regards to me writing fiction. My earliest completed novels were written when I was in my 20s and lonely. My most recent completed fiction (masks, feelings, maurice the turtle who wanted to be human, an offer of violence) was written after my wife and I separated. This blog started when divorce was on the table and I was living alone. But, this blog, and moving back in with my kids, and being a coach and a teacher and a grad student—these things have made my life better. So, while I can still write an academic paper readily enough and can manage this blog every day, I haven’t really written any fiction or poetry in quite a while.

It’s weird but I can actually cheat a little on my future writing by saying just the right thing in the blog. I almost wish I had come up with this particular thesis concept after the blog was complete because I don’t want to cheat. If this topic happens, I will just have to acknowledge that extra bit of weirdness and quote myself about cheating so as to be open and forthcoming

Today’s reason to repeat a day forever: to come up with new ideas for longform blogs I can use to aid in sensemaking and recreating my place in the world.

Quote that, future me. I dare you. But include this line as well; it’s only fair.