i had a point

One thing about Big Hero 6--the reason the film works well despite whatever flaws it might have--is that its structure is basically textbook feature film.

You've got your small catalyst at 10* minutes in--Hiro meets Tadashi. Dyer (2010) specifies that the small catalyst be something that "happens to the protagonist, and not... an action that the protagonist takes. We've already got the setup of the status quo. Now, we're moving into what will change it. Notably, it was not getting arrested that turns Hiro around. It was seeing that there were better things that he could do with his intelligence (just as his brother suggested). Dyer also suggests that a character should state the theme of the film early on, and there are important lines the clearly set up the plot, all from Tadashi. He asks Hiro, "When are you going to do something with that big brain of yours?" He asks Hiro, "What would mom and dad say?" And, after offering Hiro a ride, he tells him, "I can't stop you going, but I'm not going to let you go on your own."

(Unless specifically described otherwise, assume all times are approximate.)

After meeting Baymax, Hiro meets Callaghan and decides that he wants to go to the "nerd school" with Tadashi and the others. But, structurally, you've got to think about which throughline is the most important: Is the film about Hiro dealing with Tadashi's death? Is it about his conflict with (as it turns out) Callaghan? Is it about his teaming up with Wasabi, Honey Lemon, Go Go, and Fred? Is it about his relationship with Baymax? It's about all four, but in terms of story importance, as opposed to plot importance, I'd say the film is more about Hiro and Baymax. His relationship with Baymax is what allows him to deal with his brother's death. His relationship with Baymax is what allows him to have his conflict with Callaghan. And, his relationship with Baymax is what starts him down the path to being a superhero, that the others join him on later. Arguably, you could put the small catalyst, in a larger sense, into the entire sequence at the school--Hiro meets his future teammates, he meets Baymax, and he meets Callaghan. The only important figure still to meet is Krei (and he's a red herring later so he doesn't need to be introduced here with everyone else).

The inciting incident, which Marshall (2012) describes as "the event that sets everything in motion," has passed. Hiro has met Baymax (and Wasabi and Honey Lemon and Go Go and Fred and Callaghan, but most importantly Baymax).

The large catalyst as Dyer puts it, or just page 17 as Marshall labels it, is next. In Big Hero 6, this is the showcase. Specifically, though, this comes before Hiro goes on stage. Important note: depending on how the script described the initial bot fight, the literal page 17 might have come during or just after Hiro's presentation instead of just before. But, on screen, page 17 means 17 minutes in. And, the way I look at the movie--keep in mind I'm a bleeding heart liberal who is into social justice and cares far more about story and character than plot--the emotional beats matter more than the plot points. What you get in the film is Hiro gets called to the stage, then Honey Lemon gets everyone together to take a photo, then he goes on stage. The 17-minute mark falls pretty close to the photo, and this matters in my reading because the film is more about Hiro learning 1) to do better things with his big brain and 2) to do things with others so he is not the loner kid who gets into trouble bot fighting, than it is about Hiro fighting Callaghan.

So, then comes plot point 1. Dyer puts this at 25% of the way in, so Big Hero 6 is a little early; the explosion that kills Tadashi happens at about the 23-minute mark. And, the second meeting with Baymax happens a little too late at about the 26-minute mark. Somewhere between these two events is the break between acts. Essentially, act one ends with Tadashi's death and funeral, and act two begins with Hiro's mood being picked up, a little, by Baymax.

Dyer's next structural bit is what he calls pinch one or the twist or the complication. Taking the plot, one could assume this coincides with the initial conflict with Yokai (Callaghan in his mask), but Dyer puts this at 37.5% of the way in, and at 37 minutes 30 seconds, we're past the initial conflict with Callaghan and we are smack dab in the middle of the "drunk" Baymax bit. If you don't already love Baymax, this is the moment where you fall in love with that character. With limited expression, he manages to do a lot in a sequence like this just by pausing in the right place or falling or saying what he isn't supposed to say; "We jumped out a window!" indeed. As I read the film as more of a buddy film about Hiro and Baymax than anything else, this sequence is vital because their story takes a turn here. Because of Baymax's injuries, because reporting to the police accomplished nothing, Hiro sets out to make armour for Baymax. It is also at the end of the "drunk" Baymax bit that Hiro decides that whoever has his micro bots is the man responsible for Tadashi's death. Then, we come to the mid-point. Dyer calls the "point of no return." It is almost exactly 50 minutes in that Hiro et al go into the water in Wasabi's car. This culmination of the car chase that ends Hiro's second battle with Callaghan leads directly into the group going to Fred's house, which leads directly into them donning special outfits and weapons and becoming superheroes. Marshall separates out Act 2a from Act 2b, and the division comes when the protagoniss) "stop 'reacting' and take control of the situation." It is their defeat here by Callaghan that drives them together and drives them to become Big Hero 6. Additionally, if you think about the film from Callaghan's perspective, this is definitely his point of no return. He leaves them all to die. He has committed to being a supervillain.

Next, per Dyer, is pinch two, "a major plot event that pushes the protagonist in a new direction, usually because of the revelation of new information." He puts this at 62.5% of the way in. At about that many minutes in, Big Hero 6 land, in their new outfits, on Akuma Island where they will first learn about the Silent Sparrow experiment and then fight Callaghan together and learn that their person they're fighting is Callaghan. This is the perfect example of what Dyer is talking about.

Marshall talks about the beginning of the third act as "[r]eality return[ing]... When your protagonist's false victory is immediately undone by a huge setback." This description fits to a T the defeat of Callaghan on Akuma Island, following by the revelation of his identity, and him getting way. But, structurally, this is too early to divide act two from act three. But, take my reading of the film, the story of Hiro and Baymax, and what you get for plot point 2, 75% of the way in according to Dyer, is another scene between Hiro and Baymax in Hiro's room. This is when Baymax shows Hiro, "Tadashi is here." Video clips of Tadashi testing Baymax. And, the cliched bit where Hiro collapses into Baymax, beating on his chest, "Tadashi is gone!" Dyer specifies that plot point 2 should be "the worst thing that could possibly occur in the protagonist's pursuit of his external goal." Now, plotwise, Hiro's external goal is going after whoever killed Tadashi. Discovering that it was Callaghan is the worst thing. But, emotionally, Hiro's breakdown after turning Baymax to "destroy" mode is the bigger moment. Of course, this sort of breakdown is not precise, so the actual division could fall in between. Personally, I think it is Hiro's moment of acceptance, his "Thank you, Baymax," that makes him able to go on, able to face Callaghan without getting too emotional or reckless. It is what makes him able to go into the portal to save Callaghan's daughter, what makes him able to tell Baymax that he satisfied with his care.

Stuff gets more obvious once you're into act three. Buildup to the climax, then resolution and aftermath. The plot is resolved when Callaghan is defeated, but then you've got Hiro going into the portal, Baymax sacrificing himself. And, you've got Baymax being reborn. So much after the "plot" has ended. Because, this isn't about Hiro getting revenge. This isn't about him beating Callaghan. It is about Hiro accepting loss. It is about Hiro accepting other people in his life rather than going out on his own.

And, potential cultural appropriation aside, textbook plotting aside, cliched moments aside, the film works because the focus is on that story rather than the plot. 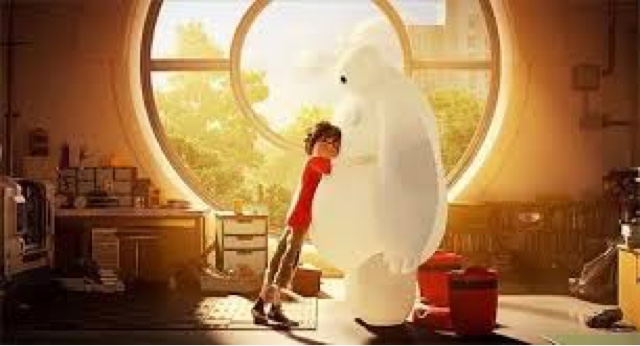