the stories in our heads

Beginners quite deliberately echoes itself. The movie begins with daisies in a vase on the windowsill. We'll learn later that is Oliver's mother's vase. We'll learn even near the end of the film that she had a photo of an arm holding daisies that Oliver used to remember as his arm handing her daisies. In the present he imagines it is her arm handing him daisies. Early on, Oliver gives Arthur (the dog) a tour of his apartment. Nearer the end of the film, he gives Anna a tour as well, and even later Anna gives him a tour (over the phone) of her apartment. As a child (and early in the film) Oliver's mom plays as if she's shooting him and he has to perform his death. Nearer the end of the film, of course, it is Oliver's father who dies and Oliver must play... must be the grieving son. Oliver meets Anna and she has no voice (she has laryngitis). Later, when he goes to her place in New York (that tour mentioned above), she is a disembodied voice. 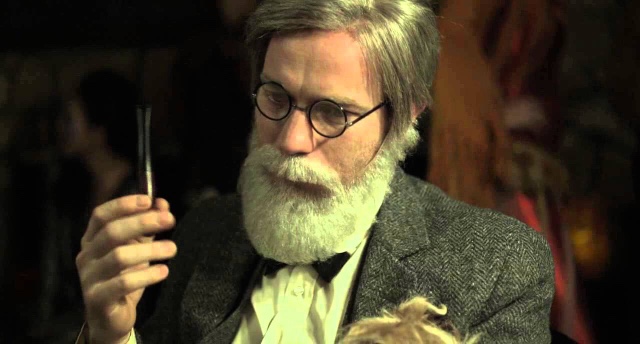 And, Oliver and Anna meet while in costume. (Both dressed as men, no less.) But, the film suggests--or is it just life that suggests?--that this is not so different from if they had met at any other time. For they (we) are always wearing costumes, always putting on the appearance of whoever they need to be. Loving son, grieving son, boyfriend, girlfriend, artist, therapist.

Like the scene where we see Hal coming out to Oliver. He's wearing a grey shirt. He's wearing a robe. He's wearing a purple sweater. (That purple sweater shows up at the end of the film again, when Oliver talks about what you do with your dead loved one's stuff.) Different versions of the same moment because it universalizes the moment (as I argued yesterday) but also because it's just dressing. The costume doesn't matter except inasmuch as the person inside it is embodied by it and through it.

That's a fancy way of saying "it's what's inside that counts." But, it's also more than that. The outside is just there to show (or to hide) what is inside.

Oliver's narration necessarily draws on visuals--"This is what pretty looked like in 1955." So does his job as a graphic artist. And Mike Mills' job as film writer and director. I wonder actually how Mills sells some of what he's doing to his producers. I imagine them like the members of The Sads when Oliver shows off his ideas for their album cover. It's too much.

I, of course, love Oliver's idea for that album cover, his "The History of Sadness" drawings, his booklet of happy faces from old advertisements. I like Mills' embellishments and tangents. Maybe it's because my head operates around similar tangents, similar embellishments.

Or just sit and watch and listen, the embellishments only inside my head.