Rebecca: "The ocean contains 97% of the world's water and generates over 70% of the Earth's oxygen and replenishes our fresh water through the clouds. If our oceans are failing, then so are we."

Just obvious and trite enough as to be passed off as winning. Not profound, though. The camera lingers later on the debate lines from Justin that are supposed to be profound. The thing is, this is a weak ending to an argument. But, all of the debate in Thumbsucker is fairly weak, simplistic to the point of being meaningless.

Seriously, what does that mean in any practical sense? A nation can only be secure if it has no conflicts ever? Sure, she's likely talking about military conflicts specifically, but the film takes these debate bits out of context and expects them to make sense. Which would be fine, if we were literally just hearing the last lines of these debates. The tiniest of inklings that debate is happening, or has happened. But, then there's this back and forth regarding TV violence:

Elise: "It's just sick. TV violence kills morality, particularly among teens. Studies prove it; day after day, kids watch shows with gunfights and the next thing you know, someone's dead.

Mark: "Television is a Trojan Horse in our homes. It claims to give us education and entertainment but it really just takes the imaginations of today's youth hostage."

Kate: "I agree. Media conglomerates say they want to change, but it's all double talk. I mean, accountability needs to be enforced."

Mark: "I concur, but let's go further. TV contributes to the decay of the American family. And once the family goes, down goes our institutions, and up goes drug abuse. Ditto gambling and pornography."

Justin: "You have no evidence to support that claim." People watch expectantly. "Images aren't reality. Violence in art goes back to..." He takes a moment finishing this line, then throws out what is obviously, historically inaccurate. "Egypt," he finishes. "What's important is teaching people to be skeptical. To draw a line. To distinguish between images and life." Then, he gets weirdly demanding of his team. "List, what's your opinion," he asks.

Mark: "Hold on. Reality is not the point here. Social decline is.

Justin: "Kate, reaction?" She has none. "Oh no, go ahead," she says. Justin continues: "Mark, I understand the spirit of your refutation. But society and its conception of reality are inextricable."

There's no implication of prepared speeches, or even a sense that any of these students could hold onto an argument for several minutes straight. And, Justin jumps in late. Elise's "studies prove it" line was worth rebutting. Kate seems to be on neither team, or both? Or are there three teams? There is no explanation of format, not explanation of technique. The closest we get to explanation is in the hallway earlier. This exchange:

Coach: "Let's do some impromptus. Maintenance."

Girl: "It is important in any system to ensure that all pieces, particularly the most important ones, are working and properly maintained."

Coach: "Stop on a dime. Rebuttal."

Girl: "The Bill of Rights was intentionally made by our forefathers to be useful for themselves and posterity. As it says in the Declaration--"

And he cuts her off. "You're a killer," he proclaims. "You're a stone-faced killer."

I get his line. Oversell the praise because the girl is headed into a competition. Get her pumped up. But, how is her Bill of Rights line a rebuttal to what she was saying about maintenance? How does one follow from the other? And, if they're memorizing these one-line impromptus, why do their debate arguments feel so off-the-cuff? Like lines people would reserve for Twitter today. 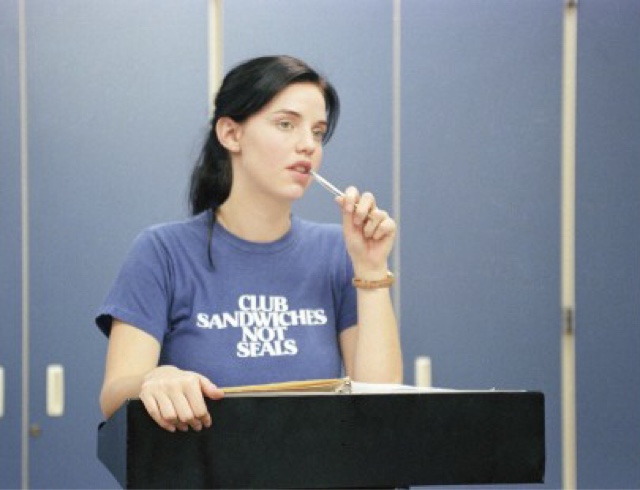 Here are a series of Justin's lines, offered up as examples of his increasingly successful debating:

Justin: "Passive acceptance of the impact of genetic engineering is itself an act of aggression."

Justin: "Isn't isolationism a bankrupt policy? Nation's no longer exist independently of one another."

Justin: "The very existence of weapons of mass destruction is in contradiction to our idea of diplomacy."

Justin: "You're angry, and that's human. But it's not a solution. We have to overcome the idea that everyone is the same."

Justin: "Your pro-disarmament views do not reflect the current international climate. They just reflect your need for everything to be nice. To be friendly. But humans are inherently hostile." "You're missing my point." "I don't think you know what your point really is. If we're to take disarmament seriously, I propose that we look at the real weapons--our minds." Cut to award ceremony and applause.

Justin: "I think you're confusing tone and content. I mean, tone has tone, but content is silent... It's not quite silent. It's just that the tone is muted. A tone that you shouldn't hear in the content." Mark: "You're missing the point." Justin: "Look, if silence is neutral, then the tone will be quieter. And the content would be neutral but heard."

Now, that last one is supposed to be him falling apart. It is not supposed to make sense. But, compare it to his earlier in-class comment on whiteness in Moby Dick (which he magically read in one sitting after getting on Ritalin because that is the way this film deals with things). Justin says: "Whiteness stands for eternity. The blankness of uninterrupted time. It represents both innocence and extinction, the beginning and the end." The film offers this line up as a signal of his increased focus, his ability to say intelligent things. For the record, I've never read all of Moby Dick so I don't know how much Justin's line here resembles that of critics or English teachers. I know Ishmael talks about whiteness for a while but I don't know what he says. But, accurate or not, the phrasing is simplistic while the word choice is pretentious. This line rings as fake, and hardly more profound or intelligent (or intelligible) as the stuff about tone.

Thumbsucker is a movie I like. But it is pieced together out of lines of dialogue and moments that ring false time and time again. I watch it any more days and I am sure that I will hate it.