you think you're you

I watched Beginners for this blog before. It was during my ""six degrees of Kevin Bacon" month. It was one link in a chain of connected films... But, as per the usual line here, every movie is such a link, and the chain just keeps getting longer.

The movie begins quietly enough, without much pretense. Oliver (Ewan McGregor) cleaning up after--as it will turn out--his father Hal (Christopher Plummer) has died. No voiceover at first. Though there will be plenty more later. Good voiceover, by the way. I made that point before. Like in Mills' more recent 20th Century Women, the voiceover and the cutaways offer "real characterization instead of simple information we could better receive another way" (which is how I put it last February).

(It's been a while since I saw his Thumbsucker but I think it did something similar as well.)

Then fireworks after the cleaning.

Then Oliver talks to the dog, gives him a tour of his apartment and whatnot.

Then the narration begins.

And, it contains so much that seems random, but really sets a tone and a context of all human experience, of life and love and history.

When his father, in flashback, tells Oliver that he (Hal) is gay, that Oliver imagines him in a purple sweater, he actually wore a robe, and we also see him in a grey shirt suggests a universality. Like he is every father who ever came out to his son, every man who ever held a secret.

We watch Hal dying in the hospital and he might as well be any parent, any family member, any friend who has or will die. 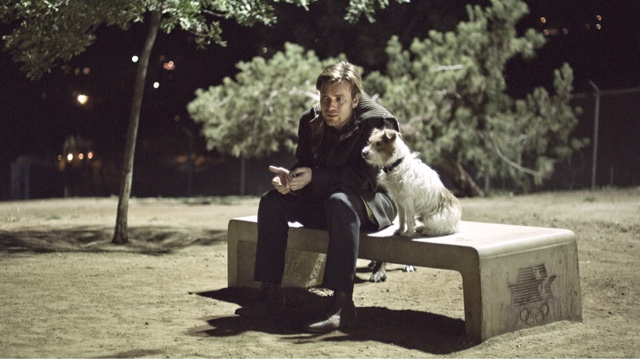 And this... exchange (?) between Oliver and the dog (Arthur, played by Cosmo) amuses me into a lovely mood:

Go and have your own experiences with your own people. I'll be right here. I'm a human. I'm not a dog. And you're a Jack Russell and that's a breed. Your personality was created by this guy John Russell, who was a hunting enthusiast in the 1800s, and he bred your ancestors for their stamina and their courage for the hunt. You think you're you and you want to chase the foxes, but other people planted that in you years ago, and now, somewhat arbitrarily, you're considered very cute by us humans, and we keep breeding you not to chase foxes, but to be cute, and we put you in television shows, and movies, and you're chasing tennis balls because they're as close to a box a you're gonna get.

And, Oliver draws a shirt that says "My personality was created by someone else and all I got was this stupid t-shirt." And it all echoes and rhymes. Other people plane ted in Hal who he was supposed to be years ago, and while he wanted to chase, not foxes but other men, he instead turned to a woman, Oliver's mother, because that was what he was supposed to do. And, who Oliver is also is a result of interactions outside his control, who his father was and is, who his mother was, who he knew in elementary school, who babysit him when he was ten years old, who he dated (or didn't) in high school, his friends who take him to the costume party, the people at work, the people at the coffee shop he sometimes goes to, the teachers he had in school, the women he dreamed about and lusted after, the boys who played with him and the ones who ignored him. The woman who, dressed as a man, lies on his couch for him to psychoanalyze her (he's dressed as Freud)...

And some of those references are right out of the film, some art just, well, arbitrary and general because that's my point. Whatever experiences you've had or not had, whoever you've known or not known--these things are building blocks of who you are, today, this hour, this minute. Reading these words affects who you are, what you're thinking about, and what you're thinking about circles right around to affect again who you are.

For example, I could mention going to the park and you might think about the park where you went as a kid--for me, it was full of dangerous playground equipment later replaced with safer (read: plastic) fare. There was a rocket with a slide, and the sides of it were not round bars but flat strips of metal with gaps between, the kind of gaps that could catch your fingers if you weren't careful, the kind of gaps that could hold you up if you were deliberately daring and tried to climb the outside of the rocket instead of taking the inside ladder up. And there were swings, of course, and a merry-go-round, and these concrete arches just low enough to ride a bike over but high enough to crawl beneath. The rest of the park included a large field, a baseball diamond, shuffleboard, and a volleyball court. But, that isn't the park you picture, of course. There might be similarities. There will definitely be differences. Even if you actually went to the same park I did as a child. And, I might recall going there with one (or several) of my sisters, or with a parent. You might think of going to the park with a girlfriend or a boyfriend. I might think of another park, now, where I went with a girlfriend. The imagery is similar, but it's always different, too.

Like film. Imagine a film about a man whose father is dying. And you might think of another film. Could be many films. John Krasinski's The Hollars, perhaps. Came out last year. I didn't see it. But, I was googling for a list of movies about dying fathers and noticed this line from Krasinski in a Washington Post piece: "The bad version of this movie, you've probably seen a hundred times." I think of Terms of Endearment, but that's a mother, and a daughter, not a father dying. And, what about dying mothers? Or dying sons? Dying daughters? Dying friends? Dying lovers? So many takes on the same story.

I think back on Benesh (2011) and how "for viewers [of a film], an imprint remains [after] as during the film the audience members 'introject' or take in its psychic content including symbols, images, and narrative, as well as projecting individual personal concerns" (p. 8). The film you watch is not the film I watch. Benesh continues: "After the film, if it is particularly 'resonant,' the process continues as the film 'plays on' in the viewer's mind." The film you remember is not the film I remember. "A personal 'edition' of the film is thus created and is assimilated into the psyche of the viewer" (ibid).

(This differing experience was the basis--and still could be, if I had the time or the funding--for a Groundhog Day Project project, showing the film to different kinds of audiences and talking to audience members before and after, or using questionnaires but the effect is the same. I've even written here in this blog (at some point that I cannot find right now) about making a documentary while doing such a thing--travel the country, or the world, screening Groundhog Day and interviewing audience members. Find the variance, find whatever the opposite of punctum is. Not the one detail that makes it work but the every detail that makes us all work for it, if you get my convoluted meaning.)

And that version of the film changes every time we recall it. It changes again if we watch the film again. It changes again if we have a conversation about the film, or write about it, or pass by it while flipping through channels on cable in the middle of the night when we can't sleep. One film does not have one meaning. Not relative to every other film, and not relative to itself. Meaning is always changing. Life gets in the way and digs into the meaning and alters it and twists it and polishes it.

Spend day after day with one film, or day after day with many films, or with no films, and you will understand if you do not already. They are all just different versions of the same stories, and there are so many versions out there as to drive one mad, or drive one to sanity. And often both. And they build you and dismantle you, as everything does. As everything will. You think you're you when you do what you do. But you're not. And you are.

And I'm talking in circles.