to the edge of within

"What a wondrous vision "Excalibur is! And what a mess." So begins Roger Ebert's review of Excalibur, and as usual, Roger says it pretty well. "This wildly ambitious retellings of the legend of King Arthur is a haunting and violent version of the Dark Ages and the heroic figures who (we dream) populated them," he continues. "But it's rough going for anyone determined to be sure what is happening from scene to scene." The problem with Excalibur, though, is not that it's particularly confusing. It is just so damn full of, well, pieces of every story about King Arthur that any of its audience are likely to know. There's a reason that The Sword in the Stone offers up next to nothing (though, admittedly, I might be remembering the better part of the film if not the larger part of it) about Arthur as an adult and spent time with that training. There's a reason that the recent King Arthur: Legend of the Sword was born out of a plan to make "a [Guy] Ritchie-led retellings of Arthurian legend spread across six whole films", according to A.V. Club, 27 January 2014. There's a reason why Arthurian legend fills book after book after book (and folks keep trying to make films of it). Arthurian legend is huge.

Camelot had the sense to focus on the romance. I barely remember if any of the Knights other than Lancelot even had names in that version of the story. King Arthur attempted to embed a sort of slice of the story, that might have inspired larger legends, into historical context. Legend of the Sword tries to offer up the origin story, a lead up the the crowning of the king, but with some more modern tropes thrown in (like Jax Teller was reincarnated in the past when he puts his arms out on that motorcycle, and his spirit got sent back in time to... Well, I guess it was the Dark Ages but Legend of the Sword makes less effort to put its film into a historical context, and I'm pretty sure it made no mention at all of Britons.

Excalibur, though--it just tried to put everything in. You've got Merlin, you've got Lancelot and Guenevere, you've got Arthur and Morgana, you've got Mordred. And, that's already everybody of import from Camelot. Throw in Perceval and Kay and Gawain and Uther and Leondegrance and Lot and Ector. And, numerous background Knights. You've got the sword in the stone bit, you've got Lancelot and Guenevere getting together, you've got the quest for the Holy Grail, plus Morgana raising Mordred to take on Arthur. To fit all of this in, you've got Gawain randomly accusing Lancelot and Guenevere of being together well before they have actually done anything but demure glances back and forth, because how else do you introduce a plot but have a third party accuse it of already happening? You've got the "waste land" phase of Camelot, or generally "the land", with Arthur himself in the role of Fisher King. Or, as Roger puts it, "Arthur is courageous in his youth, but then presides over the disintegration of the Round Table, for no apparent reason." Just one example, of what he calls, characters being "doomed to their behavior." This is a problem in any film, of course, but maybe moreso with fantasy films, because characters have their archetypes and must fit them regardless of how events should realistically transpire.

Similarly, modern fantasy like the Marvel Cinematic Universe, has some problems simply because so many films must be tied together, different directors with different scripts must produce films that still feel pretty close to one another. I've wanted to spend time with the Marvel movies in this blog, but a) those films are not readily available on any of the platforms I've got access to (at least not without extra rental fees) and b) there is way too much room to get bogged down in serious nerditry beyond just film there and that path could be dangerous. But, consider the alternative in episodic television; The X-Files comes to mind. Take an episode like "X-Cops" and compare it to say "Clyde Bruckman's Final Repose" or "War of the Coprophages compared to "Duane Barry". You can get very different tones, different styles, but you can still feel that it is the same universe, the same show, and the same characters fit. There is room for far more variety in the MCU, and if Warner Brothers actually produced a 6-film series of King Arthur films, there is room for that much story, and room for different directors offering different takes on the pieces. Ritchie could do his slightly modern crime story, but then another director could come in to really do some of the romance of Lancelot and Guenevere justice, and another could deal with the Holy Grail and another Morgana and Mordred. Make the parts feel more separate while keeping them linked. But, don't be afraid to do really different stuff. And, even if the only thing that ties them all together is a strange green glow somewhere in every scene (like in Excalibur), at least we know they tried. 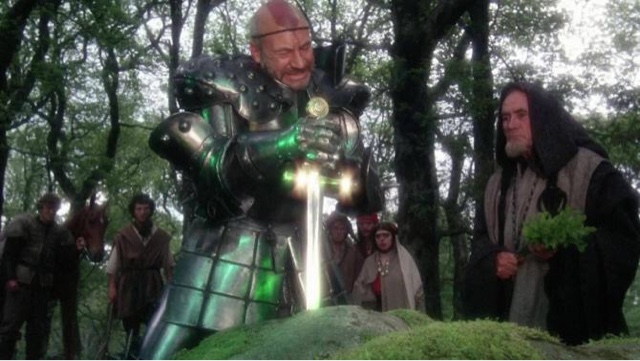