it's not a question of money

I never really wrote about the original The Magnificent Seven in this blog. (One of a few times that exhaustion at the end of a long day kept me from really putting in an effort here.) 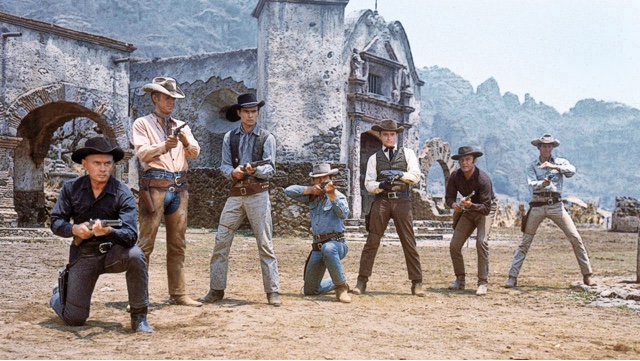 Also, it only just occurred to me, as the men from the Mexican town have come to Chris (Yul Brynner) for help, that aside from one detail--Flik being an outcast from his village rather than a stranger--A Bug's Life is basically this film, or rather Seven Samurai. And, I'm wondering how I never got that before. It's so obvious. Now, I'm wondering what else I have missed in the movies I've seen, what references went over my head because of particular timing or a lack of familiarity? I have seen Seven Samurai but maybe only once all the way through.

It's also the plot of many a D&D module. It's such a simple plot hook--a village is in trouble, and a bunch of men (usually men) have the skills to save it from its attackers. Bring your gunslinging, your knife-throwing, your bow and arrow, your magic, your lightsaber, your axe, your audacity. The fellowship of the ring, the seven samurai, those bugs from P.T. Flea's, the heroes of many a tale from a long time ago, in a galaxy far far away... (The original Star Wars, of course, stole it's plot from a different Kurosawa film, The Hidden Fortress.) Episodes of various Star Trek series, at least one of Firefly, Battlestar Galactica, plus a whole series in the 90s based on The Magnificent Seven. In Sixguns and Society: A Structural Study of the Western, Will Wright doesn't use The Magnificent Seven as one of his examples.

And I just noticed, looking at his introduction that he chose the top grossing westerns of their years. The Magnificent Seven may feel like a classic now, but it wasn't necessarily received as a great film. (Also, for some reason, Wright has no films at all from 1960 on his list of westerns involved in his study.) Howard Thompson of the New York Times, called it "a pallid, pretentious and overlong reflection of the Japanese original" with none of the "ice-cold suspense, the superb juxtaposition of revealing human vignettes and especially the pile-driver tempo" of Seven Samurai. Personally, I find some of Brynner's interactions with the others as he recruited them to be rather revealing about human nature, about what men will do for money, what they will do even when the money isn't good, what they will do to prove themselves as men... Wright puts western films in stages. The Magnificent Seven comes at the start of the westerns he defines with the "professional plot"--

Among other details, the professional plot means the heroes "are now professional fighters, men willing to defended society only as a job they accept for pay or for love of fighting, not from commitment to ideas of law and justice" (p. 85). One major difference between the "classical" plot and the "professional" is that the "symbolic emphasis is no longer on the relationship of the hero to society but on the relationships of the heroes among themselves" and the structure of the film is "more concerned with characterizing the heroes than describing standard plot developments" (p. 87). The plot here is so simple that the film doesn't have to worry much about it or its structure. Instead, yeah, the film can spend its time on character and character interaction. And, with The Magnificent Seven, specifically, the professional plot is hardly about money. Emma Cullen or the three Mexicans may offer all they have but they have very little. The pay is not the point.

Despite my talk of capitalism yesterday.

Or rather, as encapsulated in my talk of capitalism yesterday.

Wright puts the "professional" plot as being about men doing what they do for pay or for the love of fighting, as opposed to doing it for what is right. The Magnificent Seven, with the bandits (original) and robber baron with his professional army (remake) on the side of taking food and wealth from the poor, is actually a great blend of these two of Wright's plot structures. These seven men do what they do because they like shooting and killing, sure, but also because at a certain point, you either have to stand up for what is right or lie down and die. Many a western, regardless of which "plot" might fit it, involves men who are good at killing. The step from there to killing for good is a very simple one.