I don't think that I will get to the second reason that I brought up the slinky mention from Obit. today. Instead, I have to take advantage of the film I had time to see today. See, today was a busy day, a Mother's Day thing at my sister's house, a few hours of D&D and then dinner and a movie with some of my D&D friends. Then home and it's after 10 o'clock already, and I've got a job interview in the morning and some driving to do, then the usual Monday stuff. But anyway...

The film in question tonight: The Fifth Element. 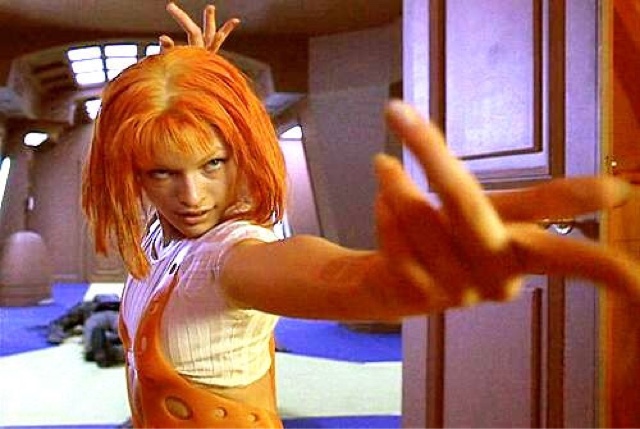 Twentieth anniversary screening. And, I remember well seeing it the first time in the theater two decades ago. Only movie I saw that weekend. Not the only movie I saw this weekend. (Saw the new King Arthur and Obit. of course.)

And, honestly, there isn't much to say about The Fifth Element that hasn't likely been said many times before in the intervening twenty years. What is worth saying, in terms of recent points I've been making here, is this:

The only faults with The Fifth Element is in some of the visuals that don't quite hold up next to what visual effects can do today. But, that's not even really a fault--that's just a movie coming out in 1997. And, everything that is over-the-top about it--Gary Oldman's Zorg, Chris Tucker's Ruby Rhod, the violence, that love-conquers-all ending... Actually, here's the thing to understand: We obviously love the violence. Look at the top films at the box office of any given year for a few decades now (maybe since film began), and it's not just sequels, franchise films, reboots and remakes, it's violent fare. "Sex and violence in the movies--that's a topic that has been with us as long as movies have been, and will still be until we turn as hedonistic as the latter days of the Roman Empire." That's what I said way back on Day 290. And, I'd wager it's truer with American cinema than elsewhere. Kill some folks and we'll let kids watch the movie. Fuck some folks and you better slap a strong rating on there. And, it is only the explicit expression of love being the thing that activates Leeloo's power that is really over-the-top as far as love-conquers-all endings go. We love love-conquers-all endings. The other stuff--Zorg, Ruby Rhod--these actually feel quite tame on repeat viewing. Especially Ruby Rhod. I mean compare the entertainment of just a decade ago with the average popular YouTube personality, for example. Add another couple hundred years and Ruby Rhod's zero-attention-span radio style might even be too complex to be realistic. And, Zorg really echoes classic foppish villains, and while he seems a bizarre personality within the reality of the film, he's hardly that bizarre a character.

What you get in The Fifth Element is a European film that embraces American excess, an American film that embraces European outlandishness. Fantastic visuals married to a fairly linear hero's journey kind of plot. Simple, straightforward, and full of creatures and locations so fucking strange that the fact they came from Besson when he was a teen makes perfect sense but they still hold up next to visuals from, say, last week's Guardians of the Galaxy Vol. 2.

Tomorrow, maybe I'll get back to the slinky. Or obituaries. Who knows?