these are your people

Permit a sidetrack. Not that there's a clear throughline driving me this month. I wanted to revive this thing and I did, and I've mostly just been winging it. One day at a time. Life is good that way. Make plans, sure. But, it's each day that matters. Do the useful things, the productive things, but also find time for the fun things. Save Buster from choking and light a woman's cigarette...

Not that I want to get into Groundhog Day references right now.

King Arthur is today's film. And, what TV Tropes calls "Cast Calculus" (or more specifically, depending on how this goes, "The Five Man Band" or The Magnificent Seven Samurai"), and The Encyclopedia of Fantasy labels simply as "Seven Samurai." Specifically, because lately I think about way too much in terms of Dungeons and Dragons references (because D&D takes up far too much of my spare time), I noticed as I watched King Arthur last night that Arthur and his Knights play like a D&D party of adventurers... Or the Fellowship of the Ring from the film (and novel) of the same title, for those of you not quite nerdy to know D&D class types. The makeup of a D&D party matters. Same with something like The Magnificent Seven. The original western version of that story--I'm less familiar with Seven Samurai, sorry--had seven types of "Cowboys":

Updated for the 90s tv show as:

And, for the recent feature remake (directed by Antoine Fuqua who also directed this version of King Arthur):

Note the repeat characters. You've got to have one who is the gambler; one who throws knives; one who is an older, possibly haunted veteran; one who is younger; one who is or was aligned with the law; one who is on the other side of the law. Archetypes within the Western framework, but they work for Samurai or pre-medieval Knights as well. (And, various films, fantasy, western, medieval, modern superhero, can mix and match types, recombine and have variants.) The audience needs its shorthand to keep the characters separate in their heads. 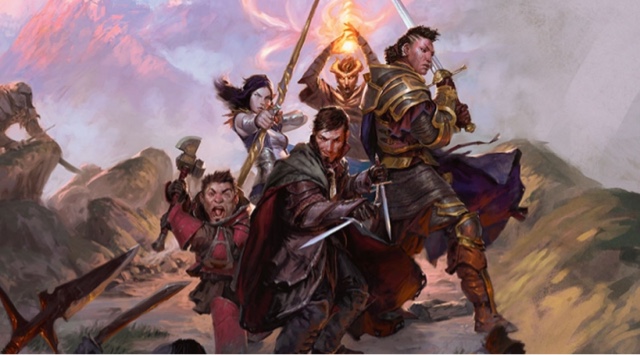 As far as other "Seven Samurai" details, Galahad seems the young hothead, Dagonet the haunted veteran (though they have all been fighting the same 15 years).

The point is not matching all of these things across stories and sequels exactly. But, when you've got an ensemble cast, and they are all fighting for the same cause, you need them to have their niches, their reason for being. Captain America, Iron Man, Thor, Hulk, Hawkeye, Black Widow--they each have their role in The Avengers. Even if Hawkeye's role isn't that obvious in the MCU, and Black Widow seems more the token female than particularly useful against alien invaders. Others have broken the Avengers down into D&D classes, but my quick take has Captain America as the Paladin, Iron Man as a Wizard (Artificer), Thor as a Cleric, Hulk as a Barbarian, Hawkeye as Ranger, Black Widow as Rogue. Of course, the point is not whether I'm right in my breakdown, but that such a breakdown is relatively easy to do. The cast calculus at work. Han Solo is the roguish gambler. Luke Skywalker the sorcerer in training, Obi Wan Kenobi a sorcerer... Except the more organized Jedi Order suggest Wizards, while their reliance on swords suggests something else entirely. Chewbacca is the Barbarian, of course. Leia Organa is more of a straight Fighter, but with noble background...

And, I could go on. Willow Rosenberg, for example--is she a Wizard like Rupert Giles, or does she fit the Warlock class more? This is filmmaking (or TV making) for a mass audience; make each character fit into a box. You can have them stretch the shape of that box, or reach outside of it, but you want the audience to be able to peg them down as something specific, something unique. Everything to make it easier for the audience. It doesn't even have to be fighters. Look at Dead Poets Society, for example. Neil is not Todd is not Knox is not Charlie is not Pitts is not Cameron is not Meeks. All schoolboys, but with clear, and clearly established differences. And not just from casting. The script lets you know early on what makes each one of them tick. Otherwise, the characters, and the story, and the plot, get blurry.