there is a legend

Structure matters, of course. Plot matters. Story matters. And, when we're stuck on origin stories--as with Big Hero 6 or King Arthur: Legend of the Sword, or 2004's King Arthur, which I've got playing now--you're going to get a lot of the same beats. Historical... Or pseudo-historical stuff like this, and you've got a cold open (with Lancelot as a child) that barely matters, you've got hordes of Roman soldiers and... I forget who they're fighting. Don't have time to get to know any just yet. Just a good battle to get the adrenalin pumping.

After some opening text to place the story into some supposed historical context. The far more fantastical King Arthur: Legend of the Sword goes for that same kind of text. We're in the "dark ages" when the landscape of Britain is covered in smoke and/or fog pretty much always, and nothing is ever particularly well lit. 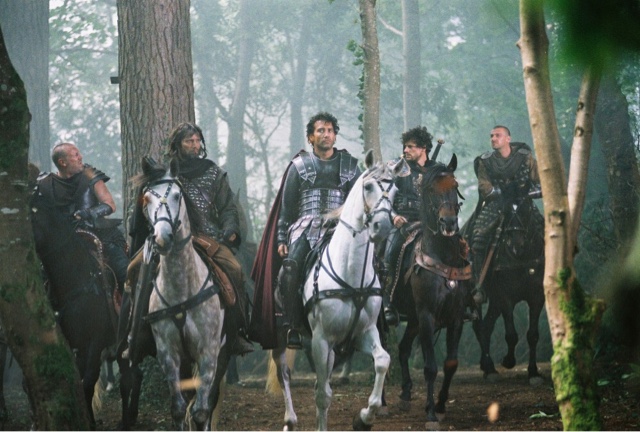 Where Legend of the Sword has no real connection to the actual history of Roman occupation of Britain (or what would become Britain), here Arthur himself is Roman, his "Knights" Sarmatians drafted by the Romans. Their enemies the savage Woads.

And, at least initially, once we're past that opening battle, the characters (and an interesting cast) have some interesting interactions. I remember this movie being less... Interesting? Good? I don't know. Maybe it gets more inane as it goes.

Separate from what's coming, I have a problem with resting Arthur strictly in the seat of Christianity (especially when his knights are very much not Christian. Plus, in 2004--and you must put any film in its historical context at some point if you're going to spend any time with it--a pro-Christian, anti-savage foreigner film from American filmmakers (even if it is steeped in British legend and filled with British actors), is problematic politically. For me.

In his review of the film, Roger Ebert latches onto the politics; "This new "King Arthur" tells a story with uncanny parallels to current events in Iraq," he writes. "The imperialists from Rome enter England intent on overthrowing the tyrannical Saxons, and find allies in the brave Woads." A quagmire of multiple sides fighting over the same land. Ebert continues:

"You--all of you--were free from your first breath!" Arthur informs his charges and future subjects, anticipating by a millennium or so the notion that all men are born free [Actually, Arthur specifically cites Pelagius, who did talk about free will], and overlooking the detail that his knights have been pressed into involuntary servitude. Later he comes across a Roman torture chamber...

Which just happened as I watch the film. And, separated by more than a decade now from the film's context, it plays less like a topical gesture than as a cheap story beat to force Arthur against the Romans (or Saxons). Not making him Roman in the first place could have made that an easier step, storywise. But, we've got to have an origin story. The film opened with Lancelot as a child, suggesting that this might be his story, and it could have been. King Arthur could have already been in place, and Lancelot introduced into his world. For some reason, many King Arthur films (or Robin Hood films, or Lone Ranger films, or Superman films (barring sequels)) insist on rewriting the beginning of the a story we already know rather than exploring other corners of it.. I mean, when I was in England as a teen, I bought a book about knights, and it included several stories about Knights of the Round Table that had little to no connection back to Arthur. Arthur was more of an idea, an ideal. This story doesn't persist because King Arthur worked his way up from nothing to be great. (That's more of an American style of origin.) Arthur had a destiny. Whether he was trained and protected by Merlin as a child a la The Sword in the Stone or grew up in a brothel a la King Arthur: Legend of the Sword he is fated to become King. This is not supposed to offer up origin stories for Arthur--those are quite simple--rather Arthur's story is supposed to be a sort of origin story for Britain. The more recent Legend of the Sword film neglects this history, offers up no real discussion about Britain or its real-world history. But, this film, despite its American pedigree, tries to deal with that history.