There's a moment at the end of The Shape of Water that almost undermines a really nice (but subtly done) theme that runs throughout the film. Oh, assume SPOILERS. (Just skip the next paragraph because the film is worth seeing.)

From the start of the film, we know that Elisa (Sally Hawkins) has scars on her neck--one of my lesser complaints is that the film never quite focuses enough on them (though it could easily focus on them too much) and I didn't even realize until just before the potentially undermining moment happens that she has scars on both side of her neck. Early in the film, when Strickland (Michael Shannon) sits Elisa and her friend and coworker Zelda (Octavia Spencer) down to talk to them, we learn that Elisa was found as a baby near a river, her neck scarred. There's no doubt that these scars (and her having been found by a river) will come into play later. But, I figured on the amphibian man (Doug Jones) either 1) having been responsible for her injuries back then (even though he is specifically from the Amazon and she lives... somewhere in the US, can't remember if they say where. Or 2) he will heal her scars and she will be able to talk and somehow that will be the moment of distraction he needs to escape. Or whatever. You know, I try not to think too far ahead in too much detail. Like when people brag about knowing right away that Malcolm Crowe (Bruce Willis) was dead the whole time, I'm like, why the fuck is that something to brag about? You ruined your own movie experience by overthinking it. But, seriously, in the end of The Shape of Water, it turns out, yes, those scars are on both sides of her neck, which makes the revelation of what they are a bit obvious--she's got gills. She can breathe underwater when the amphibian man takes her with him into the water. Which makes her less a "incomplete" human and more something close to what he is. Which comes very close to undermining the theme twisting its way through the whole movie about different people, outsiders, working together to save the life of this creature from his government tormentor.

If you skipped that paragraph, welcome. The next paragraph has minor SPOILERS. Skip to the one after if you want none at all.

At the heart of the film is a woman who cannot speak, an African American woman, a Russian spy (this isn't really a SPOILER because one of the trailers lets you know that Bob (Michael Stuhlbarg) speaks Russian right after letting us know that the Russians want the creature), and a homosexual man (that one doesn't really SPOIL the story, but it is an element that has nice revelatory moment to it that might play better fresh)--keep in mind this is 1962--and they team together to save the amphibian man from Strickland, from torture and impending vivisection. 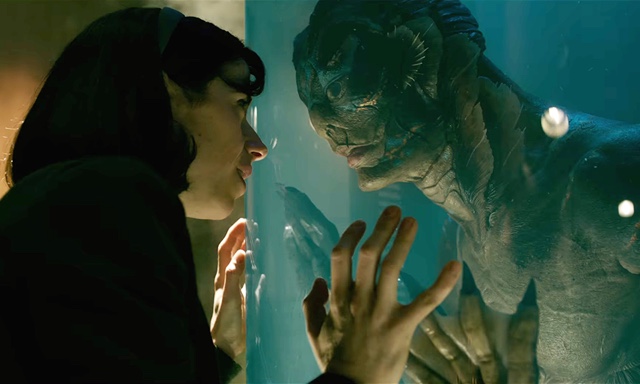 I have written in this blog many times about how reading stories and watching movies help us to have empathy for other people. So maybe we'll be nice to the old guy who can't keep up in the advertising world when photographs have replaced his art--part of the setup for Elisa's neighbor Giles (Richard Jenkins)--or be nice to the woman who has no voice, the woman who faces discrimination everywhere she goes, the man who was sent as a spy but just wants to study a unique lifeform... Or the couple who can't buy their wedding cake at the local baker because the owner is a bigot. Or the guy who gets stopped at airport security every time because his name is Arabic. The guy who gets stops by the police because his skin is dark. The human who gets treated like property because she has a vagina.

Let a few outliers into the mainstream and the men in the mainstream get scared. It's sad, really. Such fragile egos. They're already outnumbered by women; of course the notion that women might want a say is going to rub them the wrong way. But, if they could just read a book now and then, watch a movie, embrace characters and people that are not like them... The way this sentence was going to go was going to imply something simple, but it' snot simple. Not for people who don't want to empathize. Just want things the way they used to be. When women and coloreds and foreigners and homosexuals knew their place.

We need more movies with casts like this one, with a group of characters that are not all white, not all young, not all heterosexual, working together to fight the man. More multicultural, multiracial, multigendered groups saving the day. Maybe, if we make enough movies like that, some folks in the real world might get the idea that spending time in such groups is a good idea, and maybe the real world will get a little better.

But, I'm am more a cynic than an optimist, and I doubt it. We'd likely destroy each other first.