I imagine a different version of The Jazz Singer: Jess is younger (even though, apparently, Al Jolson was actually older in the original than Neil Diamond is here); if he must have the Jewish wife that he abandons (because he can't just abandon one wife), she needs to be a lot younger, too; their marriage needs to be something born out of youth, out of an urge toward tradition, and she needs to be more of an albatross like Pop than a footnote; if he is going to run away from his new life after his father disowns him, maybe we see some of Jess' grief and pain beyond him being a dick to everyone in the recording studio...

Or, better yet, Jess' story is not just about him bucking Jewish and family tradition but him doing so because he and his father (and his wife) have just moved to America, or Jess was brought as a child or was born here, and marrying Rivka was something he did for his family; maybe to get them off his back about an inkling to not just be a cantor. Jess' story is not just specifically about Jewish tradition but more broadly about the immigrant's experience. His dream is something more the American Dream, about his individualism over the more collective experience implicit in the synagogue. There is some of that in the film as it is, but not enough. The opening shots with all the different people on the streets; the ending performance of "America"--these things would feel more important if the story broadened itself a little. There are great moments here with the Jewish congregation, the kid getting ready for his bar mitzvah, Pop's party, Rivka's... whatever it is she does with the other women (she says she has a lot to do but the movie is vague), Pop's old-man-set-in-his-ways enthusiasm for it all, and his grief over his dead wife, and of course Jess' return to the synagogue at the end of the film. But, Jess separates from it a little too easily. Pop is a little too right about Jess leaving his life behind. Jess' journey needs to feel harder. And, his stretch on the road alone needs to feel more depressing, like he's lost; instead it feels like he's just bucking another tradition, damn the world.

Like Anakin killing all those Sand People more out of grief than rage, which barely relates, but it is the way my head works sometimes. One little piece of one film infects another. And, it's about the filmmakers limiting things too much. Jess Robin has one setting--I'm going to do what I want--and the moments in between when we might get to know him better and side with him... Those moments are skipped or come in montages. His relationship with Molly is built in a montage (that plays like the opening credits to a sitcom), his lonely road trip is a montage. His performance of "On the Robert E. Lee" at Molly's house after they've all been fired tells us more about his character than so much else in the film; he and the "Four Brothers" celebrate their loss. It's a moment that evokes Jess' background as a cantor--we've already seen singing and/or dancing in the synagogue three times in the film--and black culture as well (when all we've seen of that is one song performance that turned into a small riot). 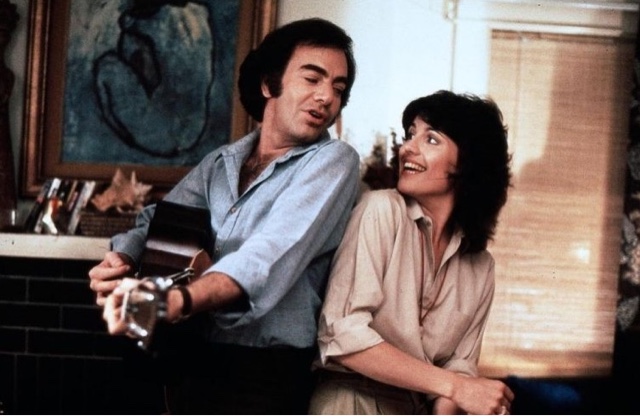 It's not that the movie is bad. It's just too simple. Too easy. Even its hard turns are too easily remedied. And those turns don't link up with what comes after--Jess' lonely road trip doesn't result in any particular song, for example. If the lyrics to "America" were more interesting, and he had spent time on the road meeting new, and different, people, the road trip would have felt like it mattered more. Instead, it's like a tantrum. With no real consequence. Molly just tales him back as soon as he shows up in LA again. Similarly, he shows up in New York again and Pop forgives him after barely a minute.