you can’t do this to me; i’m an american

Watching Raiders of the Lost Ark and there is one subject that must be presented first, get it out of the way before I get to anything else. It's the "Raiders Minimization" problem. That label for it comes from, of course, The Big Bang Theory. Not the greatest show, and it often fetishizes nerditry rather than represent it well, but it has had its moments. And, Amy Farrah Fowler's (Mayim Bialik) pronouncement is spot on. If Indiana were not there for this primary plot of this film, everything that happens would still have happened, with only slight differences. I'll let Amy explain:

Indiana Jones plays no role in the outcome of the story. If her weren't in the film, it would turn out exactly the same...

...if he weren't in the movie, the Nazis would have still found the ark, taken it to the island, opened it up and all died, just like they did.

In fact, they would have found it sooner, because there would have been no shootout at The Raven, and Toht (Ronald Lacey) would have gotten the headpiece for the Staff of Ra rather than a burned imprint of one side of it, and the German archaeology dig folk would have found the Well of the Souls more easily. They would have gotten to the Tabernacle at Geheimhaven sooner, and would have died sooner. The one difference is that maybe the Americans would not have been the next ones to get their hands on the Ark. Room for something like a sequel, with maybe the Italians swooping in and the same supernatural slaughter happening all over again. But, that would be repetitive and boring. 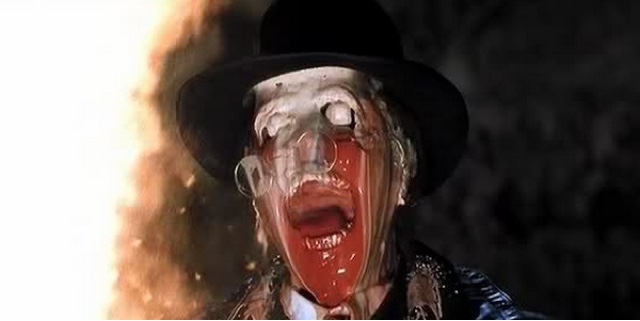 The thing is--and I will circle round to young me not noticing at all that Indiana was ineffectual at the time later, maybe tomorrow--what is the point to a story like this, then? American adventurer chases after powerful Christian symbol, the Nazis best him (almost) at every turn, but he wins in the end because of the power of God. What does this tell an American audience? Two big things: 1) the Christian God is real and his power is real, 2) even a scoundrel American will win over dark political forces like the Nazis (or translated out of the film's 1936 setting to the 1981 present, the Communists). Essentially, we are good, even the worst of us, and they are bad. It absolutely does not matter how sloppily Indy does what he does, how often he fails, how often his little victories get immediately reversed--he will still win because he is one of the good guys. What Culture describes Indy's role and his relation to the world around him pretty well:

Indy is pretty much the worst archaeologist in the history of the profession. He's a grave-robber, smashing artefacts [sic] and desecrating tombs at will, and he has zero concern for any native attempting to protect their cultural and ancestral heritage - because, clearly anyone with a swarthy skin-tone and a thick accent should immediately be classified as a villain.

Minor nitpick of their critique: he does have some concern for the cultural and ancestral heritage of those natives if not the natives themselves. He specifically makes sure that Brody (Denholm Elliott) has arranged for the ark to go to a museum after they recover it (this notion that the artifacts Indy "finds" belong in a museum is expanded on in the prologue to Last Crusade). But, yeah, he seems to not care at all for the natives. Belloq (Paul Freeman) at least works with the natives in the opening sequence in this film. (Of course, he's French, not one of the Nazis, even though he is working with them, too.)

(To be fair, given plenty of stories of men robbing old tombs, maybe Indy is quite a realistic "archaeologist" for his time. I don't rightly know.)

archaeologist; he is more a professional grave robber. But, he is an American, heterosexual, patriarchal and misogynist (and we'll come to that again tomorrow or the next day), white. So, of course, he runs roughshod over other cultures in order to hold up their artifacts as something great in a museum. Nevermind them. Just celebrate the artifacts. Fetishization of foreign culture while simultaneously neglecting that culture.

That a swarthy skin-tone and a thick accent should indicate a villain becomes even more problematic in the sequel/prequel Temple of Doom, but I may just get to that film eventually in this deconstruction, so let us focus here. It is not just the Germans--hell, they are quite white. It is the French Belloq. It is all those hooded locals in Cairo (even though Cairo locals later save Indy from Belloq as well). It is hired hands in Tanis.

An interesting note before I end this today: the next film I was supposed to be watching was The Legend of the Lone Ranger, but I forgot to check its availability. Just now, when Indy was heading after the truck--what truck?--he was, of course, riding a white horse. Despite his rugged exterior, despite his dirt-covered leather jacket and fedora, Indy is still the cowboy, just like the Lone Ranger. That "good guy with a gun" idea that we Americans love so much.