people are gonna want to see this shit

I tend to like weird little movies. A couple of my favorites from last year were The Lobster and Swiss Army Man. A couple of my favorites from this year now would be Brigsby Bear and Dave Made a Maze. I'm gonna watch both of those again tonight because... Well, because I can. The year is coming to an end. It's Oscar season, the Golden Globes are just over a week away, and it's time to start putting it all together, some perspective on 2017 in movies—putting off the perspective of my childhood in movies for a few days from now (but I will get back to that)—and make some recommendations perhaps...

First, there's this—when Dave Made a Maze art director Jeff White was asked by Tessa Morrison at Other Worlds, "Knowing everything you learned from this, what would you travel back in time and tell yourself on Day One of fabrication [of the cardboard sets]?":

I'm not sure that there was anything I could tell myself at that point that I would have believed. Each day was a set of new challenges and discoveries, staying nimble on your feet. Being open to all possibilities is the only way to attack a project like this one.

For the record, I've got Brigsby Bear playing first. Also, I kind of want to write about The Last Jedi again, but I want to watch The Force Awakens one more time before I go see the new one again, and I haven't gotten to it yet. I thought I might this weekend, but man plans, movies laugh. Or something like that. I saw Phantom Thread last night, Molly's Game the night before, watched Big Little Lies and Shadowhunters (both TV shows) a lot the last few days. It is winter break (and it's awards season), so it is time to play catch up. I've seen most of the movies nominated for Golden Globes, for Critics' Choice, for SAG, for Spirit Awards. And, though the nominations will not be announced for nearly a month, I can be pretty sure that I have already seen most of the movies that will be nominated (outside of the obvious categories—the three short film categories and foreign language film—that are hard to get to ahead of time).

Entertainment Weekly puts 34 films on the Oscar radar (i.e. :for the big award categories)—and I've seen the ones in bold.

I have already written a little bit about the year in film. For now, I will add some movies to that list. It's a pretty good list. I am actually surprised that Wind River is not already on such a list. I would add The Belko Experiment, especially if you like horror or violence in film. I would add A Ghost Story. I would add Free Fire. I would add Ingrid Goes West. I would add It Comes at Night I would add Baby Driver. I would add Loving Vincent. I would add Professor Marston and the Wonder Women. I would add Happy Death Day. If you want to be thorough for awards season, then add The Post and All the Money in the World, which should already be on that EW list. Throw in The Last Jedi and Guardians of the Galaxy Vol 2, Thor: Ragnarok, Jumanji: Welcome to the Jungle, Coco, Justice League, Jigsaw, maybe some Kingsman: The Golden Circle, Baywatch, Beach Rats, The Mummy, It, and if you really want to understand what 2017 was in movies, you have to watch The Emoji Movie even though it is awful, Atomic Blonde, though its plot is forgettable. You must watch Girls Trip (probably the best comedy of the year) and Valerian (though also quite awful, it is very pretty). Watch Spider-Man: Homecoming and Alien: Covenant, King Arthur: Legend of the Sword, and Ghost in the Shell, Power Rangers and Beauty and the Beast, all for slightly different reasons. Oh, and also Split and Rings and at least one of the two LEGO movies.

More if you don't need noteworthiness or quality.

And, imagine each of these films being made by a bunch of folks eager to make it, like James and his friends in Brigsby Bear, like Dave and his friends in Dave Made a Maze, like Tommy and Greg in The Disaster Artist. Really, film sets are much more crowded, and more dull. But, though the magic is slowed down and full of a crew sometimes numbering in the thousands, there is still magic in movies. What you get in a little movie like Brigsby Bear or a little movie like Dave Made a Maze, is maybe a less filtered form of that magic. Not that big movies cannot be good. But, there is something perhaps purer, less distilled in a little indie movie. Even when they don't say much that is profound—like this year's Columbus—the smallness, the intimacy, the sense that maybe there's less business to its production, all of this amounts to something beautiful. 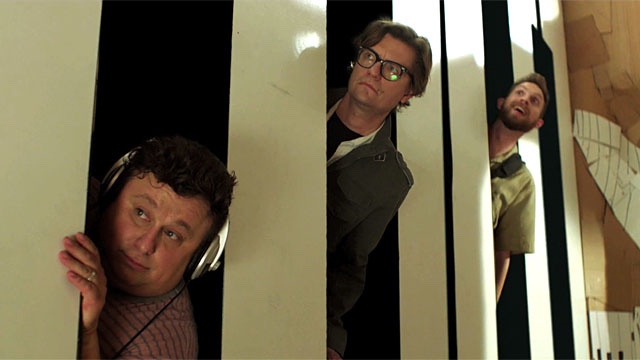 Some of those bigger movies on the lists above—they feel like too many hands were in the pot, they feel like Hollywood cynically cashing in on recognizable names, banking on familiar cash cows. Unfortunately, far too many people pay attention to Hollywood only casually; they only see a few films a year; and they only pay attention the ones with the most marketing. Of course, they're going to think it's nothing but remakes and reboots and sequels. And big shared-universe stories. And, then there's Netflix and Hulu and Amazon grabbing pieces of everybody's attention. I mean, no one has time for every movie. No one has time for every TV show. Throw YouTube and every other video platform online into the mix, and throw every social media platform in too, and it can all be quite easily too much. Like throwing a thousand balls in the air and at best, you can hope to catch just one, and you're probably going to have your eyes closed, and you're probably going to be thinking about other things, about your life, your job, your school, about politics divided and dividing.

I mean, is it any wonder that James' family embraces his fantasy in Brigsby Bear? Is it any wonder that Dave's friends embrace his in Dave Made a Maze? We survive off fantasies big and small. Even our social media selves are inventions, picking and choosing just the right selfies, just the right 140 (or 280) characters, putting just the right phrases and terms and hashtags in our bios, following just the right accounts, commenting on just the right threads. We invent our self online as we see fit. We can't help it sometimes to step outside the lines we try to draw around ourselves, step outside our own boundaries because our real selves are bigger, more expansive than anything we can contain in a Twitter page or on Instagram. Late in my master's thesis, I wrote:

In this scholarship, I deliberately deal in the popular sense of identity more than the philosophical sense because, for me, the more one researches either, the more they become one and the same. When transgender politics figure regularly into headlines, it should be clear that we understand the importance of not only one’s sense of identity but another’s response to it. Identity is a popular subject, not just a topic for communication scholarship or sociological scholarship or anthropological scholarship. I do not believe that removing one’s self, and one’s research, from the popular, means that it is inherently more legitimate or more scholarly. Returning to grounded theory or autoethnography (and, especially, Delamont’s (2007) critique thereof), your choice of topic is not the measure of your success as a scholar; rather, your ability to explore it in detail, to offer as much objectivity as you can muster, to generalize your topic so that others can take something from it, and really your expertise as a writer is what matters. And here, again, is my own showing off. I have succeeded at this. I have chosen my angles and my words to play the “information game” even here in this thesis because that is who I am. That is what makes me a communication scholar.

That's a lot of big words and "scholarly" stuff saying basically that you are what you say you are. At least as long as you keep saying it.

I ended my master's thesis with this:

And, those selves are worth our time as scholars. Turner (1966) argues, “Our goal should be to study man alive and woman alive, in the many levels of their mutual dealings” (p. viii). As researchers, we should (be allowed to) include ourselves. Regarding blogging in particular, Boylorn (2013) argues, “Auto/ethnography as a method allows me to write (about/for) my life and to make sense of it. Blogging allows me to do that in a more open space, which jeopardizes my anonymity but creates a larger public space for the kinds of conversations auto/ethnography should instigate” (p. 80). A blog itself is autoethnographic, dealing in self as it deals in whatever its more overt substance may be. For me, this was Groundhog Day (then other films). For Bird, it was her family, always coming back to her incarcerated son. For Dai it was the absurdity of watching a film he hated more each day. In each of these instances, and in so many other blogs, this balance of self and substance may favor one over the other at any given time, but both will inevitably be present. Over time, self and substance are interchangeable and malleable. All you have to do is make the choice.

I imagine James making more films with Spencer, letting his imagination leave Brigsby behind. I imagine Dave getting together again with Gordon and Harry and making a movie. And, he's got a better grasp on himself, so I'm sure he's got a better grasp on his voice, so that film is better than what they made before. And, the next one is even better.

The more you are you, the better you ought to be at it, I figure.