get the story to come off the page

One more time: Dave Made a Maze. Because repetition is the heart and soul of this blog, of my life, of life itself. Day in day out, what makes it all interesting and worth bothering are the little things, the moments that make one day unique and different from the next.

Dave's incorrect use of "tertiary" for example--when friends of mine make silly mistakes with grammar (or, Phil forbid, I make one) I notice. I don't always correct them. But, I note it and if I had the memory capacity of, say, Santa Claus, I would have a list at the end of every year and I would let people know. Like, Hi Jared, you have made [this many] grammatical errors in public this year. Hi Shari, please repair the grammatical issues and try better next year. And, so on. Eventually ending with myself: Hi Robert, you have made thousands of grammatical errors, and far too many typos to ever be forgiven. You have to do better next year. Clear and civil communication is essential to a peaceful coexistence.

Dave and Gordon's absurd "beard on the face" thing.

Unnamed Boom Operator dropping his boom for about the only time in the course of the film to help Gordon secure the temporary towel wall to keep the Minotaur from escaping the smaller maze into the larger one. (But the Cameraman just keeps filming.)

Again, the Boom Operator--when everything collapses, and he crawls out from under layers of cardboard, the first thing he does, as if by instinct, is pick up his boom all over again, because that's who he is.

Like Dave's music, his painting, his carpentry, even his job interview. Greg and Brynn saying "Hey, Dave!" at the same time. Twice.

Phil Connors saying, "Yeah, like the groundhog, Phil." (More than just the one time in earlier versions of the script, of course.)

Various characters in Star Wars saying "I have a bad feeling about this" and you're both reminded that it's just a movie, and warmed by the familiarity of a story that is dear enough to you that you recognize its tics and its mannerisms.

Like any of the movies I've been watching in this "month"-long deconstruction of my childhood experience with movies. All these movies in these four months were like staples from my early years. They bring up memories of another time and place, of VHS tapes, of movie rental stores, of action figures. They bring up lines and lyrics that sometimes I am surprised that I still know. They echo in every day and every movie since.

And, I am just dealing in movies that I watched often as a kid. A measure built on repetition rather than, necessarily, import. Some movies impacted me greatly but maybe my family didn't own them on VHS so I didn't watch them a lot. Cloak & Dagger, Airplane!, D.A.R.Y.L., Friday the 13th, Superman, Excalibur, Rocky, Poltergeist, The Amityville Horror, Clash of the Titans, Tron, The Beastmaster... And how many more? Like my own maze, but instead of cardboard, it's built out of movie theater tickets and VHS cases. There's a whole wing covered in comic book papier mache, too. And, the booby traps are all full of action figures come alive like it's Toy Story or Puppet Master... But I would have to also have a Minotaur because I was obsessed with Greek Mythology as a kid. 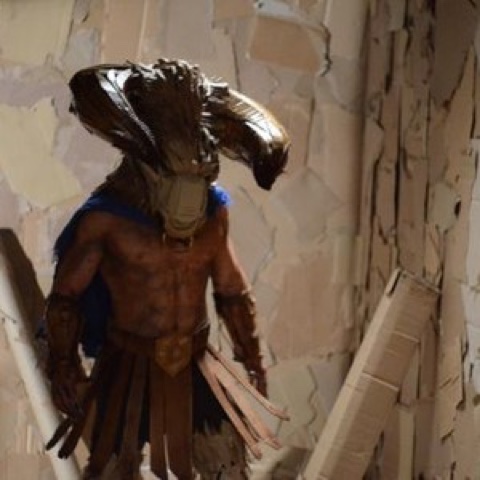 The heart of my labyrinth wouldn't be some cardboard chrysalis, though; rather, the Leviathan from Hellraiser II: Hellbound.

But, my D&D friends would probably be pretty useful in my maze. My family, too. Booby traps would probably have passwords that were just incomplete lines from old movies.

Imagine it, a giant cardboard sign in a dead-end room covered in old VHS jackets, and the sign says LESTER'S BARKING AGAIN. And, all you gotta say for a door to slide open is "and getting on my nerves again" because life is built out of all these lines of fake dialogue, all these scripted characters, these Hollywood plots, and story beats clichéd and original.

There's a wing of my maze dedicated to Cold War action films from the 1980s. The sign over the entrance says I FEEL THE NEED, and the password is "the need for speed."

And a wing dedicated to horror films, but especially slasher films (see any entry of this blog from October 2014 for more). The sign says NOBODY BELIEVES ME. The password: "I believe you, Tommy."

And so on. You exit the maze and there is a bigger maze built out of DVD packages. Outside that maze is another one that is, inexplicably, built out of Netflix and YouTube and Hulu. And, my maze(s) intersect with so many other people's mazes, and we can talk about why we do the things we do, why we like what we like, watch what we watch, until the cows come home--except the cows might come home, but all you have to do is rewind and start again.

We've all got our things. Things that stick with us. Things that remind us of childhood, of our teenage years, of that time we lied our way into Stephen King's Sleepwalkers then shot toothpicks into the ceiling at Rosie's Diner before heading home late... Or whatever your thing is. Whatever moments you have that still feel fresh after so many years.

For me--and for many of you, and probably all of you, since you're here, reading this blog, but I'm talking about me--movies are bookmarks in the text of my life, signposts in my cardboard maze.

And, you know what's awesome about my maze. It has several multiplexes, and a handful of still-operational movie rental shops. And comic book stores. And roller coasters. And toy stores, and a wing built out of LEGO blocks. Book stores, with real books.

There's also an entire wing decorated with pages from the bible, or are those scattered in that wing of Cold War movies? And the wing decorated with all my fears of the end of the world from when I was a kid and they told me at church and in the movies that it was all going to fall apart in a rain of fire and brimstone. It cannot all be good--my maze. But, none of these things is really isolated from any of the rest. The good. The bad. One movie or another. The experience of one movie is affected by the experience of another. I don't really remember what my first movie was. I don't know what my last movie will be. But, that first one affected my appreciation of all the rest, and that last one will be informed by them all.